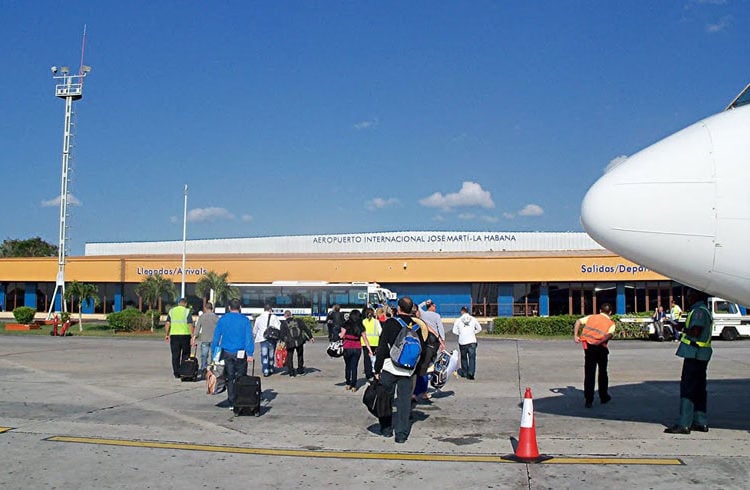 Havana’s international airport, Cub’s principal air terminal, received in the first half of this year 3.3 million travelers. The number represents a 27.4 percent increase in relation to the same period last year.

The island’s airport authorities, cited by the state-run television, affirmed that this number of passengers places José Martí Airport among the terminals with the biggest growth worldwide.

The most recent company to land in Havana was the Spanish Plus Ultra. This weekend it inaugurated its connection between the Cuban capital and Barcelona, the first to cover this route in two decades. Operated in codeshare with Cubana de Aviación, for the time being the connection will have a weekly flight.

Plus Ultra Executive Vice President Julio Martínez Sola praised the fast operation of the flight at Havana’s airport, which made it possible for it to depart at the scheduled time. Sola presented a week ago the new route of his airline and pointed out at the time that it would be the first in responding to the Catalan market’s demand to have a non-stop flight to Cuba.

After this initial step, the Spanish airline is studying the possibility of offering a “triangular” route between Barcelona, Havana and Santiago de Cuba, which it considers “very important” for the two tourist circuits since it would give travelers the opportunity of visiting the island’s two most important cities.

For the acting director of Cubana de Aviación, Ana Margarita Godoy, the opening of this operation “represents an increase in the flow of tourism to Cuba” by recovering “one of the markets we had worked with in the 1990s.”

The flights are operated with an Ultra Plus fleet of Airbus 340s with capacity for 303 passengers. The Spanish company expects to transport some 10,000 passengers a year.

In 2016 some 70,000 travelers made the Havana-Barcelona trip by making stopovers in other points since the direct link between these two cities did not exist, according to data of the island’s airport authorities.

Cuba is experiencing a tourist boom in recent years, which reached the record figure of four million foreign visitors in 2016. For this year the Ministry of Tourism (MINTUR) expects to reach 4.2 million.

To date, according to MINTUR data, more than 2.5 million visitors have arrived to the island this year. In Havana, the country’s first tourist hub, the arrivals grew 29 percent until the close of May, compared to the same period in 2016.

In terms of Spanish tourism, there has been a 10 percent increase.

Germany, France, Italy, United Kingdom and the United States are also among the countries with the largest amount of visitors to the island.

A Cuban who corresponds with kings and heads of State