Several bicycle messaging networks have begun to circulate in Havana because of the pandemic, adapting a philosophy of life and mobility to the needs of a crisis. 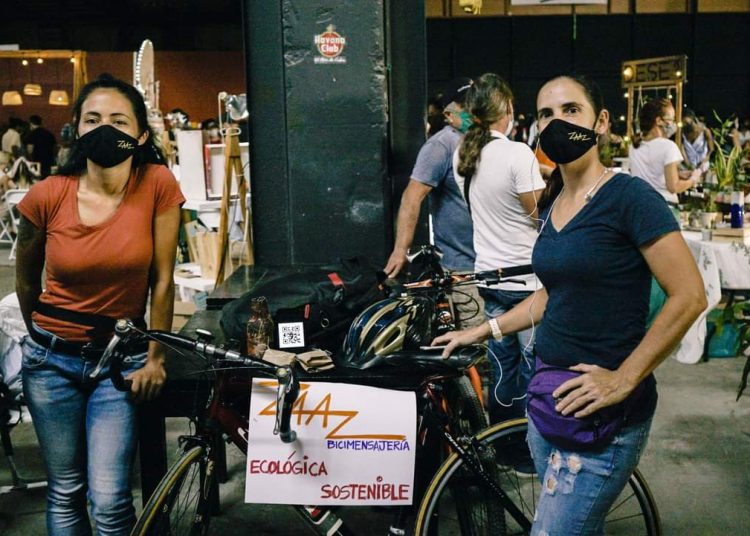 In times of crisis, the bicycle has emerged as a vital tool to supplant the lack of transportation in Cuba; although it has always been associated, globally, with a healthy and ecological lifestyle, as an alternative to exercise the body and free the atmosphere of polluting gases produced by the hydrocarbons emitted by motor vehicles.

This world life philosophy had already reached Cuba, although, to a large extent, the extension of the trend throughout the island responds more to the poor transportation conditions in the country, especially in the capital, with its high population density.

However, the transportation deficiencies in the country not only affect the state sector, nor do private carriers have the equipment and vehicles to make up for the deficiencies of public transportation. Therefore, bicycles are the most economical means of transport for “ordinary Cubans,” although their maintenance and care is also becoming more expensive.

“We buy the means and accessories that we use, many times on the black market. There is no national market to acquire these pieces at affordable prices,” comments Elizabeth Duconge, in charge of the Cicloamigos Habana project, a collaborative network of cyclists who take advantage of their free time to provide courier services in the city.

Bicycle messaging is precisely an alternative that has gained strength in the last year on the island, branching out into different ventures created, in the beginning, to meet their own needs, to later expand the work area as an economic alternative to assist other businesses.

Zaaz bicimensajería is one of the leading initiatives in Havana, created by the also founders of the Mi rinconcito venture, as a solution to bring this store’s products to its customers, according to Lisa del Prado, one of the founders of both projects.

In an interview with CubaLite, Lisa confessed that “since transportation has always been complicated to get to any corner of Havana, much more so now with the precautions that must be taken, and I frequently use the bike, it occurred to me to use it for home deliveries.”

On the other hand, Duconge, one of the founders of Cicloamigos, confessed to OnCuba that for a long time this practice has been part of her daily life: “We traveled all over Havana, neighboring provinces and routes through Cuba by bicycle. I started distributing the weekly package as a messenger and started having more and more clients and I would pass the information on how this messaging thing worked to other friends, also fans of bikes.”

“Messaging on the CicloAmigos network,” she says, “arises as a response to this crisis caused by COVID-19, also to make this free time we have on the bicycle beneficial and productive while we do what we like and, at the same time, contribute to the community. At the beginning of this world crisis we had a regularly normal life. My partner and I worked in the gastronomy sector, at the same time we had an art project, body art and visual arts studio in development, and we were bicycling fans.”

She adds that later “we all got together and decided to create a network of acquainted people who would manage the need for messaging for small business projects that worked from home, mostly in organic food, so we emerged with few specific but set clients, for whom did the messaging.”

In the beginning something similar happened with Mayte Puig, who went from managing her routes to offering courier services when a client asked her if she performed this type of service and learned of the need that other businesses had as a result of the transportation crisis in the country, due to restriction measures during the pandemic, to hire a courier service to avoid closing.

“As a result of the pandemic and the lack of tourism, work decreased and with it economic income, so as a solution I began to sell various products on WhatsApp online stores. My idea was only to sell clothes or any other object that I had unused at home, until one of my clients asked me if I did a courier service (I had never done it), so, for a very cheap price (1 CUC/4 km), I made my first delivery, after that everything I sold included bicycle messaging service,” Puig tells us about the emergence of EnBielas.

Then everything worked well for this young entrepreneur, “until I had nothing more to sell, then with the second transportation closure I saw that many sellers did not close a sale because they did not have how to transport the products, so in a week I gathered several cyclists, I created my own bicycle messaging group and started with this beautiful job that I love so much.”

This is how these women decided to combine their lifestyle with the current circumstances to find a solution to the problems they faced and, on the way, offer an efficient service to other entrepreneurs in a similar situation; they also took advantage of the gap to raise awareness, through their spaces on social networks, about cycling as a healthy practice, and, more than a business model (a term by which not all are defined), creating a collaborative network between bike lovers.

“We are not a bicycle rental service: we use it as a means of transportation, promoting healthy and sustainable mobility in Havana. Any citizen who wishes to transport products, always within the law, may contract us,” this is how Lisa del Prado defines her project, Zaaz Bicimensajería Habana.

“Cicloamigos works based on the daily availability of each person. We all have professional lives, despite the current coronavirus situation, and we carry them out along with the courier service,” Elizabeth explains about the network, which currently operates with around 40 active messengers in all the municipalities of the capital, divided by sectors, neighborhoods and districts.

“Handicraft businesses, second-hand clothes and food are the most abundant clients, although we have Premium services of minimum load with tricycles, trailers and cargo bikes, another of the services we offer, with which we have moved mattresses, glass, TV sets, several things,” she tells us.

For her part, Mayte, founder of EnBielas, points out the importance of joint work: “I collaborate with various entrepreneurial projects and for us they are very important, without the confidence they gave me I wouldn’t have my business.”

This joint work, arising from the spontaneity between entrepreneurs, has been vital in Cuba in the last year, where co-working has gone from being a specific necessity to becoming a common practice so that different ventures can survive in the midst of the country’s current complex economic situation.

“So far almost all of those in the network have kept working in our usual workplaces and our free time is dedicated almost entirely to Cicloamigos, we have a lot of love and affection for this lifestyle, which for us in Cuba is an alternative. Hopefully the time will come when we see Havana, or Old Havana, full of bicycles; that a car does not enter, or that it is completely pedestrianized and that only bicycles enter to keep the city as clean, organic, healthy and beautiful as possible,” Duconge dreams and tells us.

In this sense, much could be done by the government to improve and encourage the work of messengers because, beyond an economic or social activity, cyclists lack alternatives on the road for the safe practice of their exercise; not to mention other problems that these couriers have in their daily work.

“We work from nine to nine, with or without coronavirus, to be able to help people. We run a very great risk because almost no road law protects cyclists, we do not have bicycle lanes or other protection beyond those that we provide ourselves; we buy the means and accessories that we use, many times on the black market. There is no national market to acquire these pieces at affordable prices,” Elizabeth tells us.

Although Cicloamigos has been able to maintain the logistical part of communication through social networks and messaging applications such as WhatsApp or Telegram, “basically the greatest difficulty we have is the issue of computerization, maintaining active communication with the rates that currently exist for digital communication in Cuba; hence, the couriers themselves try to keep the network active by charging a small percentage per month, or every 15 days, and that keeps communication active to a large extent,” Duconge explains.

“If so far we have been able to maintain the network without any support from the authorities, imagine what we could do with a bike lane that would cross the city to have more road safety. Every time we send a courier on a delivery we always have that ‘little thing’ inside, hoping there is no mishap,” she tells us.

In a similar vein, Mayte also tells us that “the currently complex thing is to find good quality bicycle parts or with a good price-range ratio,” a solution that is not in the hands of those who wish to acquire this economical means of transport.

“At the beginning of this undertaking, I did not use the map, so every time I went to unknown neighborhoods I always tried to look for the names of the streets and many did not have them, that would be one of many things that the State could do: create bicycle lanes, create laws that protect the cyclist…well, millions of things,” she adds.

The creator of Cicloamigos even tells us that “our future plans include also linking ourselves to grandparents’ houses, daycare centers, being able to run free errands and commissions for these types of institutions.” Although they already maintain a stable support work with animal-lover communities, especially with the Aldama project, “transporting live animals; we have the home technical service for bicycle repair; gratuity is always appreciated with the love that we can generate and share with the community.”

In the words of Elizabeth Duconge: “One never has a notion of what can happen with this messaging thing, it is very exciting and beautiful to carry out projects of this type, it is like maintaining a gym on wheels where you get paid, instead of paying to share in the gym, and this message is very positive, it is a nice thing to say ‘don’t kill the messengers’ because in the end they only bring the message, in this case of love and support.”