The "Gallego" Fernandez, one of the "historical figures" of the Revolution, died on Sunday morning at the age of 95. 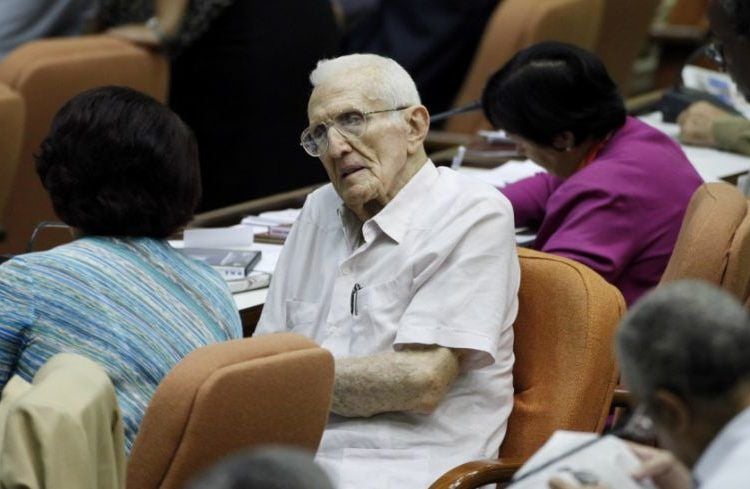 José Ramón Fernández in a photo taken in 2010 at the National Assembly of People’s Power. Photo: Javier Galeano / AP.

José Ramón Fernández Álvarez, one of the historical figures of the Cuban Revolution, died on Sunday morning at 95 years of age.

According to his wishes, the remains of the also Hero of the Republic of Cuba, known as “Gallego” Fernández, will be cremated, according to the daily Granma.

Fernández was born in Santiago de Cuba on November 4, 1923. He was a career soldier who graduated from the School of Cadets and Artillery. He also studied in the United States.

After Fulgencio Batista’s coup d’état in March 1952, Fernández conspired against the dictatorship until he was captured after the discovery of “Los puros” movement, made up of soldiers who opposed the regime.

At the time of the triumph of the Cuban Revolution, whose 60th anniversary was commemorated this January 1, he was serving time in the Presidio Modelo prison on Isla de Pinos, today Isla de la Juventud.

When he joined the Revolutionary Armed Forces (FAR), he stood out during the Bay of Pigs invasion in April 1961, when he was wounded.

During his lifetime he was one of the main leaders of the Revolution and held several posts on the Island: among others, he was Deputy Minister of the FAR until 1970, Minister of Education between 1972 and 1990, Vice President of the Council of Ministers, and Member of the Council of State from 1981 to 1993.

He was also president of the Cuban Olympic Committee from 1997 until 2018, when he was replaced and appointed Honorary President for Life.

At the time of his death he was a member of the Central Committee of the Communist Party of Cuba and a deputy to the National Assembly of People’s Power. In addition, he was General of the Reserve Division and Advisor to the Cuban President.

Granma daily does not specify the causes of his death and affirmed that details about his funeral honors would be released “later.”