The Cuban capital’s doctor’s offices will be the medical sites where the vaccination will be carried out; the date on which it will start has not yet been announced. 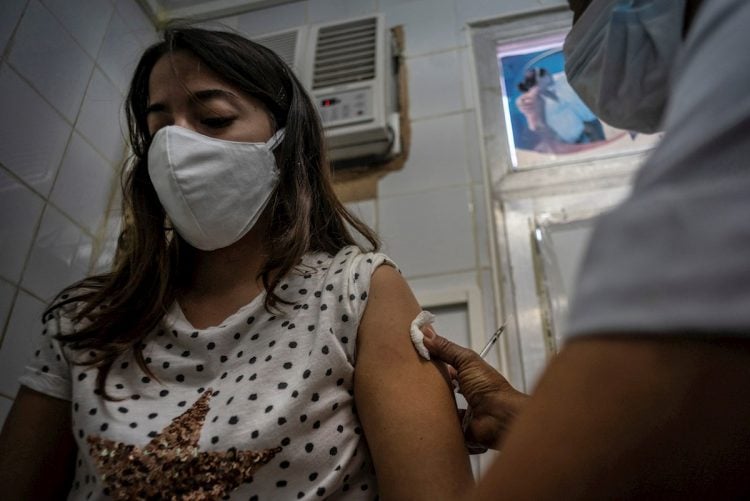 A nurse applies the Cuban Soberana 02 vaccine to a health worker, as part of a study in a polyclinic in Havana (Cuba). Photo: Ramón Espinosa/EFE/POOL.

Havana authorities hope that next Saturday the city will be ready for the mass COVID-19 vaccination, although the date on which this process should begin has not been announced.

The Cuban capital’s doctor’s offices will be the medical sites where the vaccination will be carried out, as announced this Monday in the daily meeting of the Provincial Defense Council, the newspaper Tribuna de La Habana reported.

According to the press report, the Havana authorities “agreed to establish a daily check-up of the preparatory work during the week,” in order to “be in a position to start vaccinating the capital’s citizens when the country’s leadership decides.”

Medical assistance will be reinforced with sixth year medical interns and students, “so that the rest of the normal activities in the doctor’s offices can continue,” said Tribuna de La Habana, which adds that for the beginning of the process “the premises must be defined, with a waiting place, logistics, transportation and above all, reviewing the availability of human resources capable of responding to this mission.”

Once the start date has been defined, “the vaccination will begin with the aim of covering 1,700,000 people, with an average of 85 subjects per doctor’s office each day,” said Prensa Latina (PL) news agency.

Havana has been going through a severe outbreak of COVID-19 since the end of last year, which confirms it as the epicenter of the pandemic on the island. The capital reports more than 500 cases a day on average, scattered in its 15 municipalities, and reports a total of 7,819 positive cases in the last 15 days, according to the source.

Currently there are 1,548 coronavirus outbreaks in the city and 15 open transmission events, while 3,850 people remain hospitalized with the disease, of which 45 are in intensive care: 24 in critical condition and 21 in serious condition. The incidence rate is 385.7 per 100,000 inhabitants, PL pointed out.

The phase III clinical trial of the Soberana 02 candidate is already underway in Havana. It includes 44,010 volunteers from eight municipalities, as well as an intervention study in high-risk populations, which is expected to cover about 150,000 subjects. The first dose has already been applied to more than 60,000 health workers and 10,000 from biotechnology centers, and the application of the second dose began this Monday.

The large-scale intervention in the capital would be another step on the road to immunization of the entire Cuban population, a process that the island’s government plans to complete this year.

This Monday, Cuba reported 60,000 new infections with SARS-CoV-2 and six deaths from the disease. In this way, the island has already diagnosed 94,571 positive cases and the death toll as a result of COVID-19 since March 2020 stands at 531.