The seven deceased, five women and two men, aged between 54 and 79 years, are from Matanzas, Havana and Granma, increasing to 538 the deaths caused by the pandemic in Cuba. 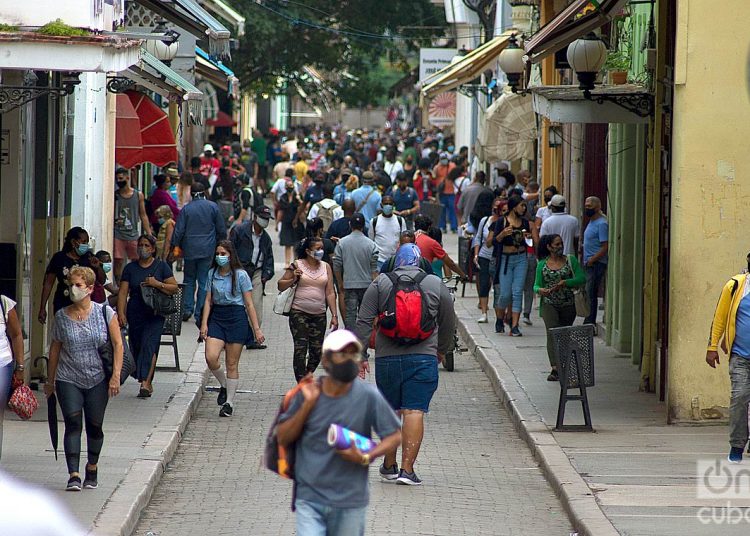 People on Obispo Street, Havana, during the outbreak of COVID-19 in January 2021. Photo: Otmaro Rodríguez/Archive.

A new record of SARS-CoV-2 virus daily infections was set in April, after the Ministry of Public Health (MINSAP) reported 1,183 cases this Monday. The highest figure previously reported was on April 4, when 1,066 positive cases were identified. There were also seven deaths on the day.

Most of the infections are due to autochthonous transmission (1,183), which also marks a record in 13 months of confrontation with the pandemic and whose highest figure had been marked on April 3, when 1,154 infections were reported.

Of the 1,183 cases today, 1,137 were contacts of confirmed cases and 15 of the infections originating abroad, with an incidence of Cuban, Venezuelan and Indian travelers from Russia, India and Venezuela.

The provinces that registered the highest figures were Havana (544 between imported and autochthonous), Matanzas (217), Holguín (80), Granma (75) and Santiago de Cuba (63).

In contrast, Guantánamo, with four cases, had the fewest cases. The special municipality Isla de la Juventud did not report infections or patients from COVID-19.

The seven deceased, five women and two men, aged between 54 and 79, and from the municipalities of Colón, Perico, Matanzas (Matanzas); Bayamo (Granma), Boyeros and San Miguel del Padrón (Havana), increasing to 538 the deaths caused by the pandemic in Cuba.

Regarding the incidence rate, the municipalities with the highest rates per 100,000 inhabitants in the last 15 days continue to be Old Havana (753.3), Regla (720.7) and Cabaiguán (627.2). The three make up the group of 12 municipalities (La Habana, Matanzas and Sancti Spíritus) in which 38.8% of the transmission has been concentrated in two weeks.

There were 994 discharges, with which a total of 90,067 have recovered from the new coronavirus in Cuba. There was a decrease in patients in ICUs, a total of 59: 26 in critical condition and 33 in serious condition.

As of midnight, there were 24,039 people hospitalized to receive care for the virus, some under surveillance and others under suspicion. The number of confirmed active cases, meanwhile, rose to 5,093.

During the day, and according to the MINSAP, 22,239 samples were processed and the highest positivity was reflected in the Holguín, Havana and Sancti Spíritus provinces. In April the virus added 19,478 infections and 113 deaths.