The news coincides with the announcement of the suspension of national tourists’ entry to the island’s hotels in its main sun and beach resort, as part of the new plan to confront COVID-19 in the country, after decreeing the phase of community transmission.

OnCuba Staff
in Tourism in Cuba
1 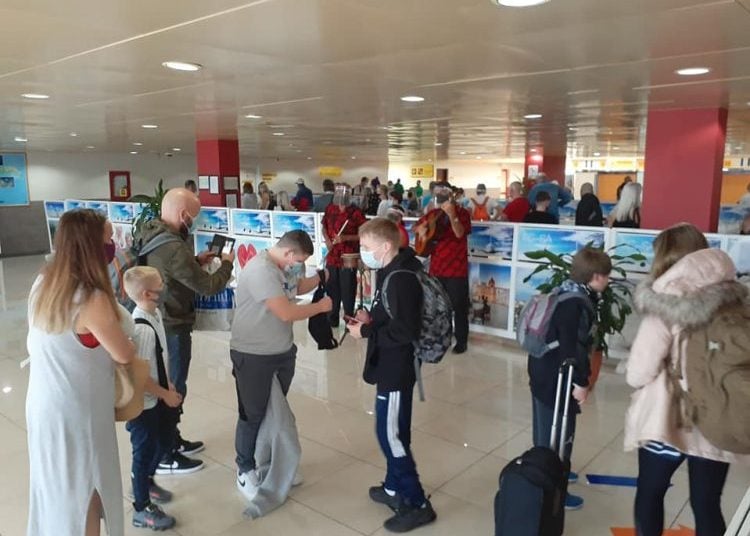 Arrival of international tourists to Varadero during the COVID-19 pandemic. Photo: @ yuni1792/Twitter/Archive.

Air Canada will resume flights to Varadero as of July 3 from the cities of Toronto and Montreal, sources from Cuban aeronautics confirmed. In this way, tourists from the North American country will return to the island’s main beach resort.

“After several months without receiving vacationers from the northern nation, Varadero’s largest market, from the economic point of view is important for the country to restart operations,” said the operations coordinator of the Juan Gualberto Gómez airport, Yandy Moreno, to Prensa Latina news agency.

“The vacationers will be subject to the health controls established to avoid contagion of COVID-19, and the biosafety measures provided for in the protocols without losing fluidity and agility in services,” added the official.

The Canadian-flagged airline will carry out weekly routes from Toronto starting next Saturday and, the following day, it will restart flights from Montreal to the Matanzas terminal.

With Air Canada, there will be six companies that fly to the airport in Cuba’s main tourist resort, along with the Russian Aeroflot, Azur Air, NordWind and Royal Flight, and the British-German agency TUI UK.

Canada recently lowered travel restrictions for people vaccinated against COVID-19, although tourists from that country must comply with health controls and the established protocol to fly to the island.

Previously, the Canadian federal government announced that, as of July 5, already vaccinated nationals and permanent residents returning to the country from abroad will not be quarantined.

Canada is among the main source countries for tourists to the Caribbean, and in particular, this nation is Cuba’s main market for vacationers.

The news of the return of Canadian visitors to Varadero coincides with the announcement of the suspension of national tourists’ entry to the island’s hotels in its main sun and beach resort, as part of the new plan to confront COVID-19 in the country, after decreeing the phase of community transmission.

Although many details have not yet been disclosed in this regard, official media and publications on social networks have already echoed the measure, which is in line with the suspension of reservations in hotel facilities for nationals, at least during the first two weeks of June, recently reported by the Cuban Ministry of Tourism (MINTUR).

The province of Matanzas faces the worst outbreak of COVID-19 since the beginning of the pandemic, with reports of more than 700 cases a day in recent days. This is one of the Cuban territories most affected today by the increase in infections and, in particular, the municipality of Cárdenas, where Varadero is located.