In the first three months of 2022, the construction of hotels, as well as other aspects related to tourism, accounted for 35% of total investments, according to data from the National Office of Statistics and Information (ONEI). 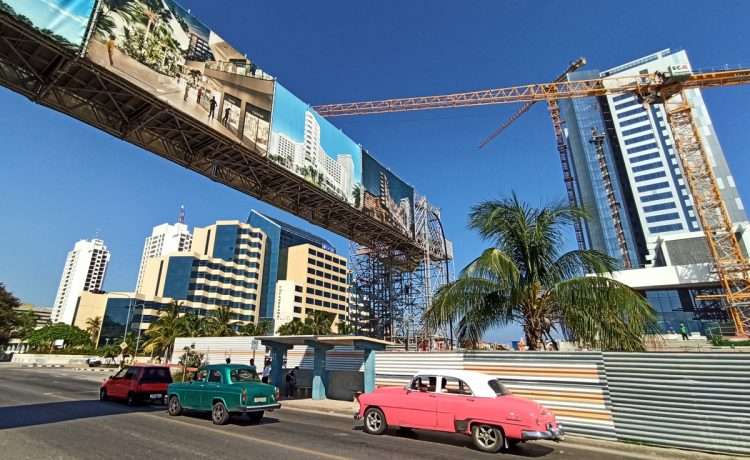 Cars drive by hotels under construction and others already open, in Havana, in August 2022. Photo: Ernesto Mastrascusa/EFE.

In the cafeteria of the luxurious Grand Aston hotel in Havana — inaugurated in March — there are more waitresses than guests, to the point that in the middle of a summer afternoon the employees joke: “There is even time to think.”

From this imposing building, with 600 rooms, which can cost up to 200 dollars a night, you can see the iconic Malecón seaside drive of the Cuban capital from a row of empty tables and a refrigerator with foreign beers.

There are hardly no visiting guests. But not only here, but in a great many of island’s hotels, some of them built and opened in recent years, coinciding with the serious crisis that the country has been facing since 2020.

“I became aware (about the lack of tourists) when I looked from my room to the street the next morning and there was no one. It is true that it seemed strange to us,” Valerie, a 20-year-old Frenchwoman together with her friend Shawnee, 19, confesses from the lobby of the Habana Libre Hotel.

Although hotel occupancy in Varadero — the main sun and beach destination in Cuba — is higher than in Havana and the island is not in high season — coinciding with winter in the northern hemisphere — the figures used by experts reaffirm the perception of these two girls.

The occupancy rate in accommodations in Cuba remained at around 50% between 2016 and 2020, according to official data collated by economist Pedro Monreal.

Monreal adds that in the last biennium, while the gross domestic product (GDP) fell by more than 7%, the State spent nearly 1.5 dillion dollars on hotels.

The construction of new tourist rooms — which this economist estimates to be the bulk of the “business services, real estate and rental activities” item — came close to 50% of the investment between 2020 and 2021.

In the first three months of 2022, the construction of hotels, as well as other aspects related to tourism, accounted for 35% of total investments, according to data from the National Office of Statistics and Information (ONEI).

This means that 20 times more was invested in this area than in public health (1.7%) or education (1.2%), according to official figures.

The increase in the number of rooms contrasts with the ups and downs that the number of tourists has suffered mainly due to political vicissitudes and the pandemic.

In the first semester, Cuba received 682,297 international travelers, five times more than in the same period of the previous year, but still far from the more than 2 million that arrived in the first six months of 2019, before the outbreak of the coronavirus.

The country’s authorities expect the arrival of 2.5 million tourists by 2022, a figure that the consulted experts have questioned whether it can be achieved with the current trend.

Before the pandemic, in 2018 and 2019, Cuba attracted between 4 and 5 million international travelers a year.

These figures have generated a lack of understanding among certain Cuban sectors, as the government itself has recognized, something in part related to the current adverse economic context.

Cuba has been going through a serious crisis since 2020 as a result of the pandemic, the tightening of U.S. sanctions and errors in national management.

Cuban President Miguel Díaz-Canel recognized this year during a tourism fair that the country’s investment effort in this sector “is not always understood by part of the population” and emphasized the need to work on the “efficiency” of the sector.

The experts, for their part, do not share the government’s diagnosis.

The construction of new hotels “is not justified,” Cuban economist Mauricio de Miranda told EFE. “At no time in recent times has there been an occupancy that really indicates that it is necessary to increase the number of rooms,” he said.

Pavel Alejandro Vidal, associate professor at the Javeriana University of Cali (Colombia), agrees with this opinion, although he adds that tourism “has maintained acceptable levels of efficiency” and highlighted that “it is the only sector in which a national recovery can be propped up.”

This commitment to increasing the hotel offer has its roots in a 2016 MINTUR plan that contemplates the construction of more than 100,000 rooms by 2030.

The document was woven at a time when the Cuban gaze was focused on the potential of the U.S. market, the largest and wealthiest in the Caribbean region, as a result of the “thaw” process with the United States during the administration of Barack Obama (2009-2017).

Two years later, and with Obama’s roadmap squandered by his successor, Republican Donald Trump, the MINTUR drew up the 2018-2030 Development Plan with a view to opening 216 new hotels.

“We cannot wait for the blockade to end to build the hotel plant,” Diaz-Canel justified then, hoping that the sector would become “the locomotive of the national economy.”

EFE contacted the MINTUR to be able to include its position and arguments, but for the moment it has not received a response.

Experts criticize not only the money that the Cuban government allocates to building hotels, but also the model with which the country tries to position itself as a destination abroad.

“They lose the opportunity to create their own tourism product. They have opted for the mass sun and beach model, which is already in decline in many countries,” economist Elías Amor criticized.

Amor also reproves that the budget is hoarded in accommodations and not in “roads or other types of infrastructure” that also make up the traveler’s experience: “In the end, tourists come out of the resort and what they find is a country with many shortages,” he pointed out.

For Vidal, the way in which hotel investment is decided in Cuba is also linked to the weight of the Business Administration Group (GAESA), a multisectoral conglomerate in the hands of the Revolutionary Armed Forces (FAR) with more than fifty enterprises, among them the main ones in the tourism sector.

“It is a factor…it has managed a cash flow independent of the rest of the economy. They have facilities that other ministries and industries do not have,” says Vidal.

GAESA, which is not accountable to the MINTUR or to parliament and does not disclose its accounts either, controls a large part of the hotels and the income from the sector.

Its economic influence in Cuba is enormous: some experts consider that it controls more than 50% of the GDP.