The Cuban musician tells OnCuba about his meeting with the legendary Beatles, who attended a concert by Cimafunk and La Tribu in New York. 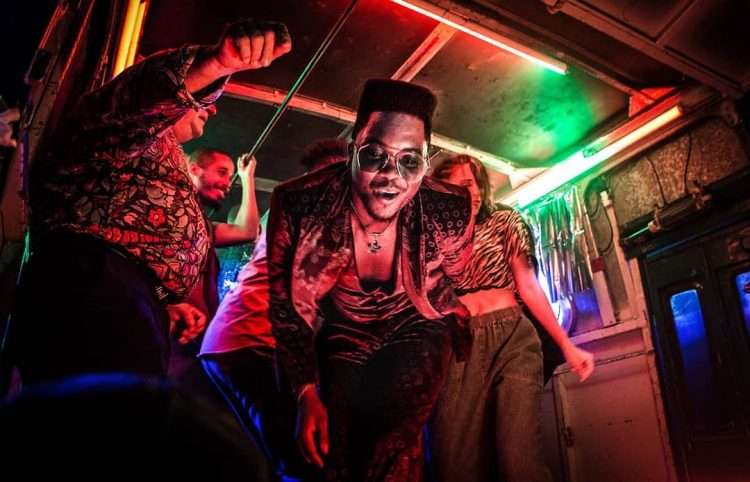 Paul McCartney didn’t think twice. Ron Delsener, an old friend and promoter of The Beatles for years, invited him to a Cimafunk concert in New York with a remarkable letter of introduction. “He has one of the best live shows I’ve ever seen,” Ron told Paul to show him the Cuban’s work.

The concert took place at the legendary Stephen Talkhouse club, in The Hamptons, New York, where a gallery of music stars has paraded. Paul arrived accompanied by his daughter Stella McCartney, an outstanding fashion designer. He sat discreetly in front of the stage and began to enjoy the concert until the end, from where he heard the songs “Funk Aspirin,” “La papa,” “Relajao,” “Paciente” and Cimafunk’s version of the anthem “Sex Machine,” by James Brown, one of the Cuban’s music heroes.

From his seat, Paul gave thanks for the energy and presence of La Tribu and its leader. Before leaving, the magic happened. Paul greeted the musicians and thanked them “for having such a dynamic show with such a good sound,” one of the show’s organizers told this editor.

Cimafunk and his musicians have been ecstatic since the experience. “Paul McCartney is a legend, one of the most important artists in history. He knows. He knows about the music, about the show, about the flow and the groove, having his support and approval has been the greatest thing there is,” Cimafunk told this writer.

“What I love and enjoy more than anything in life is being on stage. Meeting Paul from the stage is the best. The place is small, and it was tremendously hot, people going crazy, dancing and sweating, and Paul was right there, almost on stage, right next to Wao, our pianist,” he added.

Cimafunk can’t forget the hug Paul gave him at the end of the concert. “I was able to hug him and thank him for his art and for coming to see me and La Tribu. I know we will see each other again soon. This summer has been very violent, the shows with tremendous energy, La Tribu playing better than ever and super cool fans, who give us the best of them in each show,” he commented.

A team member accompanies the singer-songwriter’s words with the details that were combined for The Beatle’s meeting with Cimafunk.

“Less than a year ago, Delsener went to a Cimafunk with La Tribu concert and was captivated by the result of the show. He then commented that it was one of the best shows he had seen, and wrote his impressions of what he saw that night on stage. Then the invitation to his friend Paul came up,” he explained.

Delsener is one of the most influential producers in rock history. He is 86 years old and has been on the international circuit for more than 60 years. He currently works with the company Live Nation, which specialized in organizing concerts around the world.

The concert took place as part of the El Alimento tour, which bears the name of Cimafunk’s second album. During the tour, the musician has appeared on well-known international stages and has won a new legion of followers for his cause. And everything indicates that among them he already has the name of Paul McCartney

Dr. Zapà, the group’s musical director, had to pinch himself to believe that he was playing for one of the greatest symbols in music history.

“Having Paul in a concert is the greatest thing that has happened in my career. We are talking about The Beatles, one of the best musicians of all time. I loved seeing how he enjoyed the concert with his family. Having his blessing was the greatest thing. It was a super big push for the band, to continue creating and pushing our music. An amazing experience,” he noted.

Cimafunk has been on the rise in a vertiginous way since the independent publication of his first album Terapia. His first songs such as “Paciente” became a phenomenon at cruising speed in Cuba and his shows did not stop being a smash in Havana. His proposal attracted international attention and he has had favorable reviews of his music in prestigious newspapers such as The New York Times. During his short but explosive career, he has performed on legendary stages such as the Blue Note in New York and he has collaborated with musicians of the caliber of George Clinton.

For even bigger merits, El Alimento was selected by the Rolling Stone magazine in third place for the best albums in Spanish of 2021. “Cimafunk’s shining second album, El Alimento, unfolds as a series of intersections between Afro-Cuban musical tradition and America’s masters of funk, hip-hop and rock & roll,” said Rolling Stone.