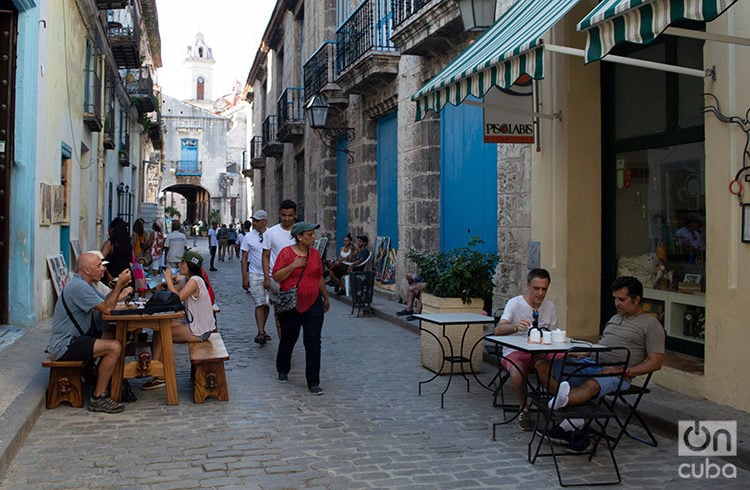 Cuba lowered to 4,750,000 its forecast for international visitors in 2018, “a figure below what had been planned” initially, according to Manuel Marrero, the island’s minister of tourism, in a meeting with Cuban President Miguel Díaz-Canel.

At the meeting, held “early this week” according to the daily Granma, Marrero affirmed that despite the decrease, the new projection “denotes the efforts that have been made in the midst of a period marked by climatic contingencies and the restrictions imposed by the U.S. government to their citizens’ travel.”

Cuban tourism’s initial forecast for this year was to reach the five million for the first time ever, after approaching the 4.7 million in 2017. However, a 6.5 percent drop with respect to the previous year was reported in the first semester, attributed mainly to the reduction of Americans’ travel due to the restrictive measures of the Trump administration.

A few days ago, the Cuban Foreign Ministry, in its report on the economic impact of the U.S. embargo, affirmed that in the first quarter of 2018 the number of U.S. visitors decreased by 43 percent.

Meanwhile, a report by The Havana Consulting Group (THCG), based in Miami, set at 23.6 percent the decrease in U.S. travel to the island in the first semester compared to the same period in 2017. According to its data, from January 1 to June 30, 82,269 U.S. tourists less visited Cuba than in those months of the previous year (348,713).

At the meeting, dedicated to checking “important programs” for Cuba’s development, Díaz-Canel  “ratified” the significance of tourism for the Cuban economy and the need to prepare “to assume the high demands” of the so-called smokeless industry.

The new president praised “the mayor investment process” in this sector since the 1990s and said that “all the agencies have to provide quality products and services to tourism.”

Marrero reported that in 2018 the handing over of new rooms will be surpassed, since 5,357 will be ready out of the planned 4,625, “due to a great extent to the progress made in the construction of Varadero’s Internacional Hotel.

In addition, he referred to the recent inauguration of the Segundo Frente Hotel, located in the Santiago de Cuba municipality by the same name and dedicated to nature tourism, and affirmed that according to the surveys made among the tourists, the destination’s repeat visits is 39.07 percent and the main reasons for traveling to Cuba are, in this order, its beaches, culture, people and safety.

During the meeting, Díaz-Canel also reviewed the agricultural and food program, especially urban, suburban and family agriculture, about which he said that “even though all their possibilities have not been exploited, they have made it possible to improve the diet, diversify offers and generate jobs in all the municipalities.”

He also assessed the production of renewable energy, in which, according to Granma, “investments of great impact” are being made in wind, bioelectric and solar power to decrease the consumption of fuel and the emissions contaminating the environment. According to what was reported, at present there are 49 solar photovoltaic parks operating in Cuba, with an estimated generation of 165 gigawatt/h/year; and by the close of 2018 another 17 should be handed over.