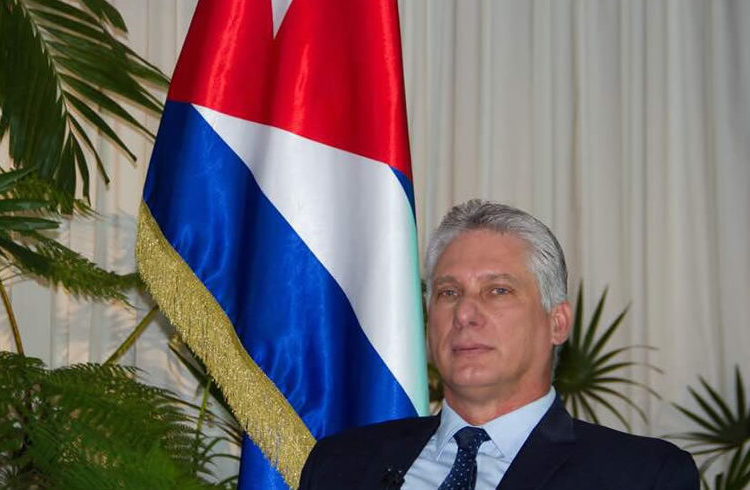 Cuban President Miguel Díaz-Canel affirmed that the elimination of the term “communism” in the draft new constitution of the country is not a “renouncement” since it is implicit in socialism, in what was his first televised interview since he assumed the post in April.

“I don’t understand it as a renunciation,” Díaz-Canel responded after the president of the Venezuelan state-run Telesur channel, Patricia Villegas, asked him why the provisional text of the next Magna Carta only mentions “socialism” as State policy, compared to the one in force that consigns the “advance toward the Communist society.”

The Cuban president referred to the ideas of German philosopher Karl Marx, who presented socialism as a step previous to achieving the goal of the communist society, when arguing that “communism and socialism are intimately related” and “any of the two terms implies the other.”

In that sense, he defended that almost six decades after the current system of Soviet inspiration under the leadership of Fidel Castro was imposed after the 1959 Revolution, today the country is “closer to the construction of socialism, which is complex and wide ranging.”

What will not be modified with respect to the current Constitution of 1976 is the absolute power of the Communist Party of Cuba (PCC), which will remain as the State’s “higher leading force,” in an attempt to reinforce the system by preventing the emergence of other political forces.

Regarding this matter, the Telesur journalist also asked for the opinion of the Cuban president, who referred to the need to maintain “unity” in the face of alleged foreign attacks to fragment the island’s society and policy.

“The Cuban revolution’s enemy knows that its weapon is to fragment our unity,” he said, in apparent allusion to the United States and the island’s dissidents, most of them established and organized in the nearby peninsula of Florida, where they have a strong political influence.

Díaz-Canel affirmed that the country’s young generations “identify with the revolution and with the Party” and therefore they are in favor of the system that forbids other political forces on the margin of the PCC.

Cuban President Miguel Díaz-Canel ruled out there could be a dialogue between his country and the United States while the Donald Trump administration keeps its “abnormal attitude” toward the island.

“We want to dialogue, but it can only be as equals, that we be respected and that our sovereignty and our independence is not conditioned, because we don’t accept impositions and we are not willing to make concessions,” the president affirmed in an interview with Telesur, the first since he assumed the post last April.

Cuba and the United States reestablished diplomatic relations during Barack Obama’s last term in office after more than half a century of enmity, a historic “thaw” abruptly stopped after the arrival to the White House of Trump, who was against the process promoted by his predecessor.

Cuban President Miguel Díaz-Canel also accused the United States of wanting to impose neoliberalism in Latin America and of wanting to prevent Cuba’s example to be “repeated” in the region.

“They have tried to fracture the unity in the integration mechanisms” of the region like the Bolivarian Alliance for the Peoples of Our America (ALBA), reaffirmed Díaz-Canel, referring to Washington, during his first interview given to the Venezuelan Telesur channel after almost five months in power.

“The Americans don’t want a repeat of Cuba in any other place in Latin America,” the president affirmed and specifically accused the Donald Trump government of “pressuring the peoples” of the region through political and economic strategies to adopt “a position against Venezuela.”

He asserted that, in collusion with the Venezuelan oligarchy, the United States has tried to destabilize the government of Nicolás Maduro through “non-conventional warfare,” the promotion of “violence within society” and “economic and financial blockade.”

He underlined, however, that the adversaries of the Maduro government “have slammed the door in their faces” since he “continues resisting.”

Diaz-Canel also assessed the presidential victory of leftist Andres Manuel López Obrador in Mexico, whom he defined as “hope for Mexico and also for Latin America and the Caribbean.”

The Cuban president was of the opinion that Mexico’s still president-elect’s imminent arrival to power, previewed for December 1, will contribute to balance the “correlation of forces” in the region in the political sphere.

He also said that López Obrador “has a tremendous commitment to Mexico’s renovation” and will make an effort to promote economic and social development.

Lastly, Díaz-Canel referred to Cuba’s role as host to Colombia’s peace process, since it has been the venue of the talks between the government of that country and the FARC guerrilla group, which culminated in 2016, and is now hosting the talks with the National Liberation Army (ELN) guerrilla group, currently suspended.

“We have to support the struggle for peace in Colombia,” said the Cuban president, after underlining his wish that “the parties can talk and resolve” their differences.

Cuban President Miguel Díaz-Canel revealed that he speaks “practically every day” with Raúl Castro, the leader of the governing Communist Party and his predecessor in the post, with whom he has a “very personal” relationship.

In the first interview given after assuming the Cuban presidency four months ago, Díaz-Canel said that Raúl Castro, 87, devotes his attention to the “intensity” with which he is working, as well as on “everything being done,” and he “gives his advice very sincerely and without the slightest hint of vanity, of imposing or limiting us in something.”

“At times I feel he is like a father who is guiding me and who at the same time is letting us walk, doing without continuing to carry out his functions and his hierarchy as first secretary of the Party,” he said in statements given in Havana to the Latin American Telesur channel.

Díaz-Canel affirmed that the Cuban people “is very aware that Raúl is present, he is active and is always paying attention to what is happening.”

That’s why he considered that “in everything that is done there is a continuity of the commitment of the Party, the government, the nation, to the people” and he said that he feels “very sure” just like the members of the Council of Ministers and of the government “because we follow that line, that leadership and because of the way in which he educates.”

He highlighted the “example” and the “great commitment” that is “being passed on, taking the steps along the paths that they opened, walking behind two giants,” which is what they represent for him.

Government “for the people, by the people and for the Revolution”

When assessing the first months of his government, Díaz-Canel pointed out that they have been weeks of “a great deal of experience” and of “reflection” in which a “collective exercise” has been done with the Council of Ministers under the concept of government “for the people, by the people and for the Revolution.”

He also referred to the draft of the new Constitution currently being debated by the people on the island for its subsequent approval in a referendum and he considered that that text will be “strengthened” with the incorporation of the contributions of that discussion.

When asked about the issues in the draft of the constitutional reform which have been controversial in the debate like the limits in the concentration of property and wealth, he pointed out that the discussion lies in what “must be in the Constitution and not the laws and the procedures.”

In his opinion it is “the popular debate and the wisdom that is going to have the last word.”

He said he also agreed, as the draft of the new Constitution proposes, in modifying the definition of marriage in the text, which would open the doors to the eventual approval of a law that will endorse same-sex marriages on the island.

The president said he coincides with the focus of recognition of that type of union between persons “without any restrictions” because the country and the concepts are changing. “We are not in a glass bubble and we are living realities,” he commented.

In recent years, he said, “there has been a thought evolution,” while he defended that there didn’t exist “any type of discrimination,” but he also recognized that different positions in relation to that proposal that still subsist in Cuban society are appearing “honestly.”

The Catholic Church and the evangelical churches have openly shown they are against the constitutional modification that would pave the way for same-sex marriages.

Díaz-Canel’s exclusive interview with Telesur, a prerecorded broadcast and supposedly recorded days before, has captured interest in Cuba since it is the first given by the 58-year-old president, who last April 20 was handed the command of the country by Raúl Castro, who will remain at the head of the PCC until 2021.