Many people look through the store windows. Others stand, or sit, waiting for their turn to go in. Some onlookers wander among those who wait. New buyers continue arriving and asking who the last person is on the line. There are also police officers and employees, to make sure nothing gets out of control. 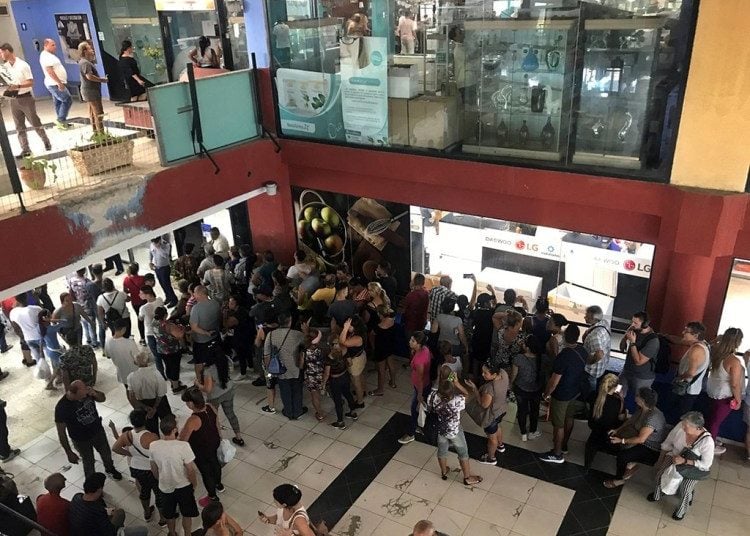 Monday, October 28, 10:30 in the morning. A hundred people, perhaps more, are grouped inside the Galerias de Paseo shopping center, in Havana. The line, which goes up the ramp that connects the ground floor with the upper floors, becomes thicker and more agitated as it approaches the door of the store where as of today different electrical appliances are being sold in dollars.

The store is downstairs, at the back of the mall, at the beginning of the ramp. It is one of the 13 that opened its doors on Monday in the capital and in Santiago de Cuba, as part of the new economic measures announced days ago by the Cuban government. One of those that sell through debit cards associated with bank accounts in foreign currency.

Many people look through the store windows. Others remain standing, or sitting on benches or on the edge of the ramp, waiting for their turn to go in. Some onlookers wander among those who wait. New buyers continue arriving and asking who the last person is on the line. Those in front crowd around the employees who answer their questions and try to organize the entry. There are also police officers and other employees with walkie-talkies, to make sure nothing gets out of control.

One of them tells me I can’t take pictures of the line, that it’s not allowed. I ask him why and he tells me those are his orders. I tell him that I have taken photos before in that store and have never been told not to, but he tells me that I can’t have taken photos in that store, that this store is new, different, and that his job is to ensure that everything goes well in it.

I can, on the other hand, take pictures of the price lists that are attached to a column. A group of people surround the column, check prices, take pictures with their cell phones. Behind, others wait to do the same, cell phones at the ready.

People talk to each other, comment on prices and their equivalents in stores that sell in convertible pesos (CUC) and on the black market. Most, from what I hear, appreciate the option of these new state stores because for them it is cheaper than buying from those who bring this equipment from Panama, Mexico and other countries.

One of them is Juan Carlos, who when many are barely getting to the line, already comes out with his new Daewoo refrigerator and a one-ton split. “I came early, because the early bird catches the worm,” he tells me, “and I know how things are in Cuba, afterwards what I want has finished and I have to wait for them to come back in.”

“How could a refrigerator like this was going to cost me 600 pesos (dollars) and a Split 360. That’s why I told my brother in Germany to transfer money to my account to complete the money, in euros so nothing would go wrong, and that’s it, I had no problems in the store, even the post worked well, so I’m leaving happy,” he explains as he takes his appliances from the mall, where the car that will take the purchase to his house is waiting for him.

Scenes like this are repeated in the basement of the Focsa building, the tallest in Cuba. There, surrounded by other establishments in an indoor gallery, is another store that since Monday has sold several equipment in foreign currency. The line is somewhat shorter than the one in Galerías de Paseo―although it is far from being short―but the atmosphere of restlessness and expectation is similar.

There are also police officers and employees outside the store, and a sheet with the price list that can hardly be read because of how faint the print is, almost transparent. Even so, many make an effort. Many others stick their noses to the store windows trying to see the prices and characteristics of the appliances. They even take all kinds of pictures, in front of the employees who let them and continue doing their job.

“They say you can only buy two of each thing,” complains a man wearing a cap, in shorts and a T-shirt standing in the middle of the line. “Well, that’s better,” an older woman by his side says, “that way more people can buy, because I heard that they were going to stock up little by little, and can you imagine that I line up and in the end there isn’t what I came to buy?”

I think it would seem difficult for that to happen, because the stores have just opened this Monday. However, the woman is right. Not in the Focsa, at least not at that time, but it does happen a few blocks away, in El Tángana gas station, very close to the seawall. There they don’t sell appliances, but electric motorcycles, and at 11:30 in the morning the ones with the largest battery, which are also the most expensive, at over 1,600 dollars, are already sold out.

This caused some to turn around and go out in search of another store where they could find them. Others, on the other hand, preferred to stay and buy those that cost 1,489 dollars, although their battery is not like that of the ones that were sold out. There are still enough.

“They look good,” Yoel tells me, waiting for his turn to buy. In addition, he adds, “there aren’t that many people anymore and you have to take advantage. Look, right now a man came from the Sasa, on 23 and C, and said there was a ton of people. And electric motorcycles are not being sold there, just tires, engines and other car parts. But the thing is that everyone is doing the same, trying to get ahead.”

And he’s right. Compared with those of Galerías de Paseo and Focsa, at this time the El Tángana line is nothing. There are barely several dozen people and everything is working smoothly. In 23 and C, however the crowd is much bigger, more agitated and dispersed. I know because I’ve already been there. And unlike other stores, almost all buyers are men.

“Drivers and motorists,” Yoel explains loquaciously, “who bought their parts from those who brought them from abroad, even from Russia. Let’s see what happens from now on, because these people (the sellers) are going to have to lower the prices to keep their business, that is, if the State keeps these stores stocked,” he notes, “which it should, to see if things improve.”

A police officer comes out of the store, reorganizes people and takes the first three to another place, where motorcycles are on exhibit. There are red, blue, orange, black motorcycles. Once they choose the want they want, the buyers retrace their steps and enter the store where they were lining up, to pay.

When they go out with their bikes, several persons approach them, ask them, take a close look at the equipment, make calculations. Yoel among them.

I see him get in line, which is activated as soon as the police officer comes out in search of the next buyers. It’s noon and it’s only been three hours on the first day of the new foreign currency stores in Havana. The first of many, according to the Cuban government. Time will tell.