It currently supports the fight against the coronavirus with 43 brigades in 33 countries. 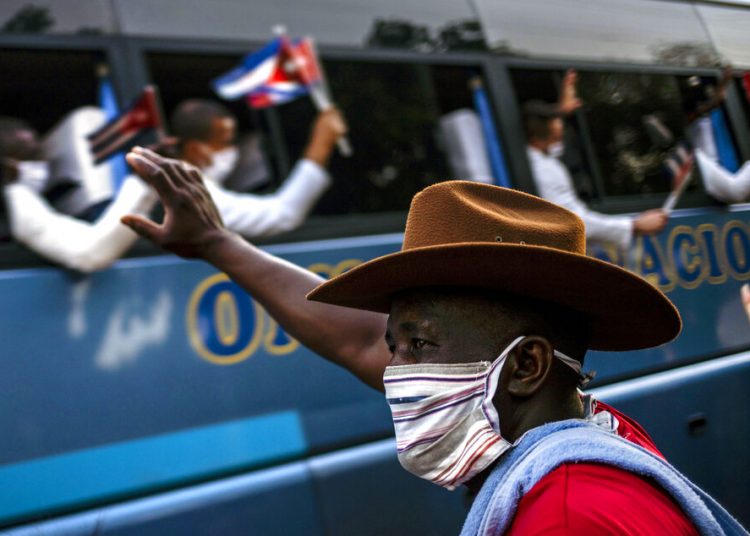 A man greets a group of doctors, part of the Henry Reeve Contingent’s Cuban medical brigade that returned to Havana, Cuba, on Monday, June 8, 2020. The doctors had traveled to Italy to help with the COVID-19 emergency. Photo: Ramón Espinosa/AP

With dozens of missions completed in different parts of the world, four million people treated and more than 89,000 lives saved, the Henry Reeve International Contingent of Doctors Specialized in Disaster Situations and Serious Epidemics is celebrating its 15 years, precisely when it is playing a predominant role in the fight against the coronavirus.

Created in 2005 by the late former President Fidel Castro to aid New Orleans, United States, after the devastating passage of Hurricane Katrina (Washington rejected the aid), this group of “internationalist doctors” has worked in 46 nations and five non-autonomous territories from all over the planet.

Its mission is to bring “humanitarian-medical-health aid to populations victims of natural disasters and epidemics in other countries, and help in their recovery,” says the newspaper Granma, which this Saturday dedicated its front page and inside pages to highlight the work of the Cuban doctors.

Among the Contingent’s most remembered missions are the fight against Ebola in Africa (2015), cholera in Haiti (2010-they treated more than 400,000 people and saved the lives of 76,000) and the earthquake in Pakistan (2005 ), where they treated almost two million patients, performed more than 14,000 surgeries, more than 166,000 survivors received specialized rehabilitation treatment, and more than 2,000 were saved, according to official figures in Cubadebate.

More than 4,000 health professionals participated in these cooperation missions, in which more than three million people were treated.

Until the beginning of August 2020, the Contingent has collaborated in 22 nations in Latin America and the Caribbean, in five in Asia and Oceania, in 13 in Sub-Saharan Africa, and in three in North Africa, the Middle East and Europe, respectively.

In recognition of its work in emergency medical care, the Henry Reeve received the Dr. LEE Jong-wook Award from the World Health Organization at the 70th World Health Assembly ceremony on May 26, 2017.

Originally founded to aid New Orleans, Castro thought of the name Henry Reeve for the brigade as a tribute to the ties between the two nations, staunch enemies for more than half a century.

Henry Reeve (Brooklyn, 1850-Sancti Spíritus, 1876) was an American brigadier-drummer in the Union Army during the American Civil War who enlisted as a volunteer in the Cuban Liberation Army in the first war of independence against Spain.

Reeve served for seven years alongside the Mambí fighters and, until his death at age 26, he had participated in more than 400 combats. “The Englishman,” as the insurgents nicknamed him, earned the respect of the Cubans for his courage.

On the day of the Contingent’s anniversary, Cuban President Miguel Díaz-Canel congratulated on Twitter the “more than 9,000 health professionals of the Henry Reeve Contingent who have been facing and overcoming pain and death in the world for 15 years.” The president thanked the professionals for their “generosity and example” and for “saving lives.”

At present, the Henry Reeve Contingent is actively working to confront the coronavirus pandemic. Some 3,800 Cuban health workers have traveled to 39 nations in Latin America and the Caribbean, Africa and the Middle East, among them Qatar, Mexico, Honduras, Venezuela, Haiti, Jamaica and South Africa.

They also traveled to Europe for the first time, where island doctors provided assistance in Andorra and Italy.

According to updated official data, the contingent has treated more than 550,900 people. Of the 52 brigades to fight COVID-19, 43 continue to provide health services in 33 nations.

Recently, several solidarity with Cuba organizations abroad have asked that the Henry Reeve contingent be awarded the Nobel Peace Prize for being an example of “altruism, solidarity and humanism.”

According to Havana, a total of 400,000 Cuban specialists had provided services in 164 nations by the end of 2019. There are currently about 37,000 health professionals in 67 countries.

The medical missions have recently become a battlefront between Cuba and the United States, which accuses the island of withholding most of the salary of health personnel while exposing them to “terrible working conditions.”

Cuba, for its part, dismisses these accusations as “lies” and an “immoral campaign,” and has asked that “pettiness and hostility” be put aside in the midst of the pandemic.