That was how she organized and undertook her journey, selling whatever she could in Cuba and supported by family in the United States. 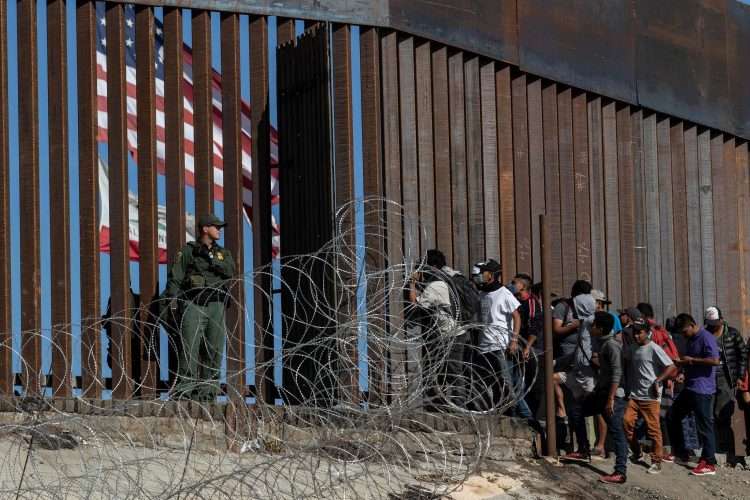 Central American migrants look through the fence as a Border Patrol agent stands guard near the El Chaparral border crossing in Tijuana, Mexico (2018). Photo: Taken from The New York Times.

Daniela Sánchez, a 33-year-old woman born in Caimito, Artemisa province, a lawyer by profession, recently married and without children, decided to set out for the United States last year: “too much ‘stubbornness,’ too much secrecy, fear of being caught in an illegality when it is not possible to live any other way; in short, few options for the future.” And that was how she organized and undertook her journey, selling whatever she could in Cuba and supported by family in the United States. This is the story of her “journey”:

I left Cuba on February 8, 2022 with a seven-hour stopover in Panama, seven hours in Costa Rica, one hour in El Salvador and from there to Nicaragua, all by plane. Arriving in Nicaragua, the “contact” for the trip was there, a person who took us by bus through Nicaragua until we arrived very close to Honduras. We stayed there in a place that had terrible conditions, we practically couldn’t even lie down because we were all crowded together on the floor, on a dirt floor and in a house without windows where we couldn’t bathe or look outside. Of course, they brought us food in a “thermopack” despite the poor conditions we were in.

The police stopped us there all the time. They told us that if we didn’t give them money, they would return us to Nicaragua or take us prisoner. We went in groups of eighty, seventy people, we traveled in large groups, and there were rows and rows of buses, caravans of buses… In Honduras almost the entire journey was like this, until we arrived at a city, I don’t know, I get mixed up with the names of places, imagine, but the crossing lasted almost a day, we hardly slept there, the whole time we went by bus.

We crossed the border with Guatemala at night and they put us up in a hotel. Early the next day, they took us to a bus station, and we took one to the end of Guatemala and there it was the same process: “money all the way” for the Guatemalan police: twenty pesos, thirty pesos, fifty pesos, what they wanted to ask for, blackmailing us, if we didn’t pay them, they would turn us over or deport us to Cuba. Although we knew there was no extradition because those countries cannot extradite people to Cuba, one is always afraid that they will arrest you, that they will return you to Nicaragua, and that is why one goes and gives them the money they ask for, because the objective is to reach the final destination and not return to Cuba. Many exclaimed on the way that they preferred to run out of money, even stay working in “one of those countries,” rather than return to Cuba.

In Guatemala, near the border, they put us up in a small hotel. We were there for about two days because the guides told us that it was a bit difficult to go to Mexico. And, when we finally achieved it, the stay was much longer because I left Cuba on February 8 or 9, I was already in Mexico on February 14, and I just turned myself in at the United States border on March 6…so my longest stay was in Mexico, 21 days or so.

We spent three or four days in Tapachula1 in terrible conditions. They put us in a kind of warehouse with quilts on the floor, because they weren’t mattresses, but quilts that, of course, had previously been used by a hundred thousand other people, imagine the conditions they were in. There we slept on the floor, although they gave us breakfast, lunch and dinner. It struck me that Tapachula did not seem like a Mexican city because of so many Cubans that were there: it was full, full of Cubans, it was such a large wave of Cubans that it seemed to me that I was in a marginal neighborhood in Cuba because of all the Cubans there, so many people that, when the food arrived at a little school that worked as an improvised dining room, there were “queues” of thousands and thousands of people, thousands…. And when the day came to leave the city, everything was stopped because, according to “them” (the “polleros”), they had not been given the “green light” (by the authorities), and the day they finally put us on the transportation, a few groups left and not the thousands of people that were in the city.

There they divided us by warehouses and put us on trucks, sitting next to each other. We were all packed tightly together and our backpacks on the floor below us so that fifty people fit per truck. That day I saw about seven or eight trucks, you can imagine the number of people we were and, even so, more than half stayed in Tapachula.

From there they took us to another place where they took care of us because we were their “merchandise” — because that’s how I felt, like merchandise —, and we stayed there for several days, also with many Cubans. They took us out in boats on an hour or a little more than an hour trip until we reached the coast, I think, of Oaxaca. When we made landfall, I had to make a very tedious trip in a 4×4 van that I thought was going to kill us. I told myself: “this is how far we get,” because we were going at an extreme speed and I felt that no one was going to come out alive…but we survived and reached the city of Oaxaca.

From there we went by plane to the border, to Mexicali, and we arrived at a very desolate “eight-lane” type highway. I realized that we were already in the desert. We crossed a fence and walked for about four hours. It was a very arid place, and the journey was very tiring. The women sat down exhausted, there was a girl who fainted, another got asthma and we thought she would not be able to continue, and so on… I got very nervous when I saw that and started crying: a young woman, much younger than me, twenty-four years old, with that asthma attack and there was no way she was going to recover. Luckily, one of the guides had salbutamol and with that she perked up a bit.

When we arrived at a certain place on the border, the “guides” told us that they could not accompany us anymore because they could not be in that area, so we continued walking alone for about an hour and, according to the instructions they gave us, we knew that we had to go up a hill and then go down it to see “the Wall,”2 and there we had to start skirting it.

And, when I was finally right next to the “Wall,” I had to go around it on a very high hill, and that was when my strength ran out, so much so that I didn’t want to walk anymore.

I think I was able to get there thanks to the men who were on the “journey.” They encouraged me and took me by the hands and practically carried me because I said I couldn’t take it anymore, because it was a too long a walk! Imagine, through the desert, and where we permanently sank into the sand, which was very soft. In addition, we got into holes, we fell, we were covered in thorns because of the number of bushes with thorns there, of cacti that are in the desert, no, no, no, no way, it was horrible. I think it was one of the worst things, the end; for me it was the worst part of the journey.

There the men had to help the women because it wasn’t just me who couldn’t go up the hill, which was immense, an enormous hill, and the sand did not help you because it was desert sand, the kind you sink into, you fall all the time…. All I did was hold myself with one hand from the bars of the wall, while a man pushed my shoulder with the backpack from behind and another helped me with the other arm in front. Then, when we went around the “Wall” we realized that we had to go down the hill again and everyone, even the men, sat down as if to say “we can’t take it anymore.” But everyone there, oh! I can’t explain it to you, it was one of the deepest feelings, a very deep feeling because everyone was crying: crying and crying and crying… Because we realized that we had achieved it, that they hadn’t come looking for us yet but now we were already on the “other side,” on American soil, and we immediately drew strength from where we didn’t have any and we went down that hill like bats out of hell: everyone crying, everyone went quickly, quickly, quickly, quickly, and immediately they arrived.… they arrived in those little trucks, I don’t know if you have seen them?

I remember as if it were today: he was a gringo boy, a blonde American; a blonde American young woman; and a tall, dark-haired, very nice boy, Cuban, by the way, who said that he had come there as a child and treated us very well. They told us “Welcome to the Land of Freedom.” Imagine! Everyone crying: men, women, everyone crying with joy… They told us to sit down, to take off our shoelaces, coats, things that we had double, the hair ties, the earrings in the case of women.… Then they gave us some “nylons,” some plastic bags to put the backpacks inside, the laces, things like that. They sat the women on one side and the men on the other, and we traveled many kilometers and it took us a long time to get there because it seems that one turns around, I don’t know why, and nothing could be seen on the outside, only from some small holes…

1 Mexican city belonging to the state of Chiapas and bordering Guatemala where there has been a significant number of irregular migrants in transit for some years, including Cubans.

2 Refers to the wall that divides the Mexico-United States border.