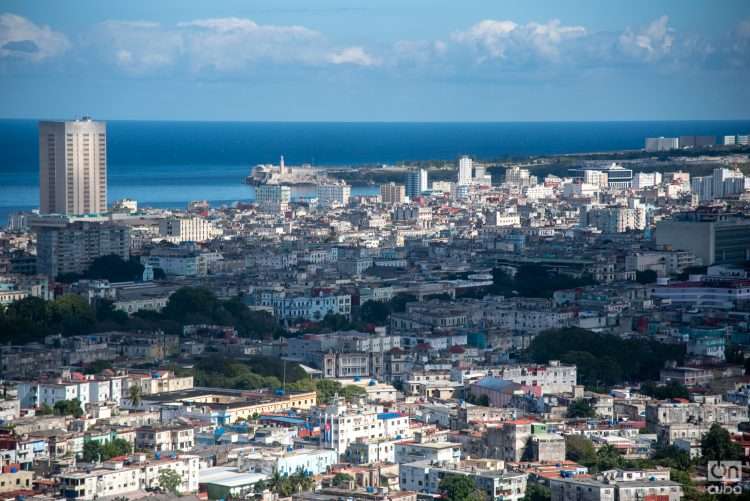 Recently, architecture professor Abel Tablada published a frank and lucid article on the growing deterioration of Cuban cities. In it he reflects on the causes that have motivated the unfortunate current urban and architectural panorama, and identifies seven factors as essential: insufficient maintenance and rehabilitation of the building fund; the limited participation of architects as designers in the processes of renovation or private construction; the disappearance of the tender or contest processes in the contracting of works; the devaluation and indifference to the role of architecture as part of Cuban culture; the degradation of cultural values ​​and references by both popular sectors and officials; the general lack of sense of belonging of common or public property and the repeated non-compliance with urban regulations by state and private entities.

When talking with officials from the institutions related to these issues — Ministry of Construction, National Institute of Territorial Organization and Urbanism, local governments… — it is frequent, almost inevitable, that the key argument that would justify all the calamities come up: the lack of resources. And from there to the blockade there is only one step to avoid responsibilities. Without denying the enormous material difficulties that the country is facing to reverse urban deterioration (or the damage caused by the blockade), such argumentation also has the effect of disguising — consciously or unconsciously — all the insufficiencies, ineptitudes and blunders we have to face daily and that have little or nothing to do with the lack of material resources.

Cities are a built object, but also a way of life, a network of social and economic networks, as well as power relations. They have a physical and morphological dimension — both on a building and a neighborhood scale — that undoubtedly facilitates or hinders urban functioning and, with it, the lives of citizens. A building with a small kitchen or one exposed to the sun, a neighborhood with a grocery store that is too far from home or a park without benches or trees can make life more difficult for its users. But the city has other dimensions — functional, environmental, cultural, aesthetic, economic, social — which, although they undoubtedly condition and are conditioned by the built structures, can influence their good or bad functioning as much or more than the latter.

There are an infinity of factors that facilitate or not daily life in the city and that are not related to the availability of material resources and a great deal to intellectual, cultural, organizational, human and political resources; what for many years has been identified as “subjective” factors. All this not only affects the physical deterioration of the city but also the social, cultural and spiritual deterioration of urban life. There are multiple social processes that have been deteriorating and have made daily life become an ordeal.

I will show some examples of problems that directly and decisively affect urban life and whose solution has nothing to do with the lack of material resources.

First of all, a satisfactory relationship between the government/administration and its citizens is vital for the good management of the city. In theory, in our country, this relationship, which should channel and facilitate citizen participation and popular control, should be developed through neighborhood delegates and rendering of accounts meetings. However, its scant relevance in decision-making is notorious due to the strong centralization in the management of available resources and to the fact that investments depend much more on ministerial plans and programs than on local governments, which nullifies or reduces the decision-making power of the delegates and with it that of the citizens.

Trying to make up for these dysfunctions through letters and demands addressed to higher levels is, most of the time, absolutely useless due to the lack of answers. Recently, the technological facilities offered by computerization to achieve what has been called “e-government” have opened enormous possibilities to promote mass participation. But, on the contrary, concrete practice demonstrates the uselessness and ineffectiveness of web pages or portals designed for these purposes. They offer little or no information on the actions of their institutions and ignore most of the messages that reach them. It is not material resources that are missing here, but intellectual resources and political will.

The room for maneuver that still exists to improve urban deterioration is great, not only in its construction and rehabilitation but also in its management. More investment is not being requested, what is being demanded is a greater participation in its management. Why so much resistance to implementing participatory budgets where the citizens of a neighborhood give their opinion in the identification of investment priorities and the allocation of some financing? Why so much indifference to popular questions and demands on the institutions’ web pages? Why not strengthen local administrations by placing sufficiently trained and adequately paid cadres in them? Why not develop an investment budget for the city — structured and approved by it — that is not just the sum of ministerial allocations? Why not promote a system of rates and contributions that directly link the financial contributions of families and enterprises in a specific area with the immediate results of its urbanization? None of this has to do with the amount of material resources or with the blockade.

Another aspect of urban life refers to the environmental and aesthetic quality of buildings, urban roads, public spaces, etc. Its progressive degradation is something that we all suffer. Obviously, with more lights, more asphalt, more paint, more cement, the situation could improve, but does it only depend on this? When these elements are available, does the situation really improve? Unfortunately not. We have witnessed strong citizen complaints on the networks about repeated clumsy urban interventions and without consultation that have had to be rectified or demolished. The widespread non-compliance with urban regulations, both by private and state institutions, has nothing to do with resources but with urban discipline. The bad taste of many constructions and improvised adaptations, without having an architectural project is a general trend. The demanded approval of the independent exercise of architecture does not require more material resources. The non-existence of adequate dissemination of the cultural values ​​of architecture as one of the arts, the non-existence of architectural criticism in our media, the absence of tenders and contests, the intrusiveness of foreign companies in large projects weakens national architecture and impoverishes its quality. All are factors that would undoubtedly improve the quality and aesthetics of the urban environment without demanding material resources but possibly saving them.

Another field in which the margin of action is very wide and in which enormous amounts of resources are wasted or misused is that of the management of the city’s technical networks. Avoiding indiscriminate and abusive pruning does not depend on insufficient instruments but on insufficient knowledge, organizational laziness, indifference and not infrequently corrupt activities. Operators’ mistreatment of the garbage containers, the destruction of containers and sidewalks by the machinery used in any old way by communal services, the continuous breaking of the paved surface by individuals and by state enterprises is abusive, indiscriminate and chaotic. Ditches are dug haphazardly, they are left open or poorly sealed, the lack of coordination is notorious and ditches have often been opened a few days after the streets have just been paved. Are such atrocities due to the lack of material resources or to the lack of sensitivity, responsibility and organization of the officials and directors of the urban administration who must control such work? Is the absolute ineffectiveness of the responsible institutions in the face of continuous noise attacks day and night due to a lack of resources?

Lastly, is the current chaos in commercial distribution networks due solely to a lack of material resources? If there is financial capacity to distribute a certain amount of chicken, oil, detergent, etc. in a regulated and controlled manner, why the need for thousands of households to lose hours and hours of their lives looking to see “what was brought out” and where, standing in line for endless hours under the sun or the rain, miserably wasting time? If everyone is registered with the OFICODA consumer registry, why is it necessary to get a bottle of oil at the grocers’ and get the other bottle from other stores? If there is not enough, the distribution cycle can be extended, but what is the point of this double distribution channel? Who benefits from the current multiplicity of distribution channels if not the resellers? Is it really an impossible task to simplify and rationalize distribution circuits?

It is striking that commercial chains have the necessary currency to import cash registers, but then it is common for less than half to be active due to lack of cashiers, causing unnecessary queues. It is not uncommon for each product to be paid for in a different cash register at the expense of consumers’ time and fatigue. Queues at dawn to get the ticket that entitles you to buy, queue to enter the store, queue to pay at the cash register…. Perhaps there are reasons that explain this nonsense, but then, what material resources are missing to give at least a substantiated public explanation? And it is better not to touch the world of administrative procedures in housing departments, in banks, etc.

To return to the world of urban planning, it has been a year since the Council of Ministers published Agreement 9101 on the approval of the General Plan for the territorial and urban planning of Havana. In its article 15 it says that “the Governor of the city of Havana delivers to the IPF (Institute of Physical Planning), before April 30 of each year, the Annual Report on the evaluation of the implementation of the Plan.” Is there any Havanan who has knowledge of this evaluation? Is no one accountable to the public?

In short, not all the physical deterioration of cities is due, far from it, to the lack of material resources, nor is all the deterioration of the city physical. The potential for improving the quality of life of citizens without spending a penny is still considerable. This has much more to do with intellectual and organizational capacity, with responsibility and political will, with human sensitivity than with volumes of steel and cement.