“The key factor will be when we return to normal in terms of regular flights, because ultimately what a Cuban citizen needs to be able to return to the country is a flight,” said Ernesto Soberón Guzmán, general director of Consular Affairs and Cuban Residents Abroad of the island’s Foreign Ministry. 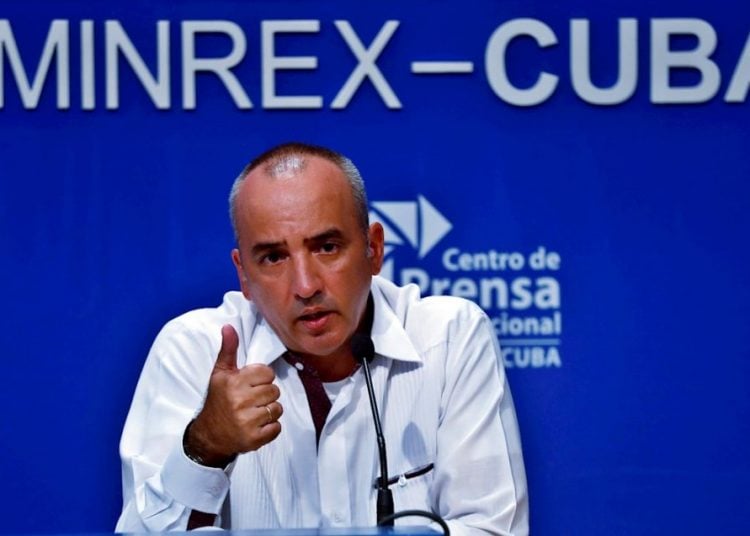 Ernesto Soberón, general director of Consular Affairs and Cuban Residents Abroad of MINREX, at a press conference at the International Press Center in Havana, on October 19, 2020. Photo: Ernesto Mastrascusa/EFE.

The Cuban Ministry of Foreign Affairs (MINREX) confirmed this Monday that the collection of the extension for Cubans’ stay abroad beyond the 24 months established by law will remain suspended until “normality is achieved in terms of regular flights.”

“The key factor will be when we return to normal in terms of regular flights, because ultimately what a Cuban citizen needs to be able to return to the country is a flight,” said Ernesto Soberón Guzmán, general director of Consular Affairs and Cuban Residents Abroad of MINREX, in response to OnCuba during a press conference.

The suspension of the collection of the extension, which allows those who have exceeded the time established by the island’s immigration law to maintain residence in Cuba, had been decreed last March due to the coronavirus pandemic. Its objective then, explained Soberón, was “to guarantee that Cubans who were abroad when flights between Cuba and abroad became difficult due to the pandemic, maintain their permanent residence in Cuba without having to carry out any consular procedures or go to any consulate, since it was a situation that was beyond these citizens’ will.”

However, recently the Cuban consulates restored the tariff for each month of extension abroad, after the announcement by Havana of a new plan to confront COVID-19 and the entry of most of the country into the so-called “new normal.”

The measure, however, was quickly rectified, after the criticism and discomfort generated in a large part of the Cuban community outside the island. Last Friday, just four days after the charge was reestablished, MINREX announced that “the possibility for our nationals to return to the country without having to carry out consular procedures to extend their stay abroad, while this situation persists,” is extended.

Now, Soberón specified that in order to make this decision they had taken into account the still not opened Havana airport, the main and largest operational capacity in the country, and the outbreaks of the disease in different countries, some of which have important communities of Cubans. In addition, he explained that “the opinions received from different associations of Cubans living abroad, as well as criteria expressed on a personal level by Cubans who have been unable to return to our country” were taken into account.

Due to this, he said, the extension―which he described as “a procedure not used much” before the pandemic―will remain “for the moment,” and he affirmed that the issue would be re-analyzed when regular flights from and to Cuba are normalized.

“There will be countries where there are a number of flights that allow the return of everyone who wants to return; there will be others in which the epidemiological situation will not allow that amount of flights; there will be countries that will have their own regulations, and all this will have to be taken into account when making new decisions, because it is a matter that exceeds the will of the people, and it would not be fair not to extend the stay of whoever is in a country from where there are no flights when their interest is to return to Cuba,” he said.

During the press conference, the general director of Consular Affairs and Cuban Residents Abroad of MINREX also referred to the work carried out by Cuban consulates and consular offices outside the island to tend to the Cuban community residing abroad during the pandemic.

He affirmed that, among other actions, the transfer to Cuba of more than 5,700 Cubans stranded in 56 countries, on 94 charter flights, was negotiated with airlines and authorities from different countries; and that consular assistance was provided to Cuban crew members enrolled in more than 12 cruise ships and more than 20 merchant ships, stranded in ports throughout the world.

In addition, he said that “priority was given to the cases of Cuban citizens who were infected with COVID-19” outside the country and “the necessary support to the families and friends of Cuban citizens who, unfortunately, have died abroad because of this disease” was provided, although he didn’t give statistics regarding these cases.

Similarly, he assured that there are no issues vetoed in Cuba’s dialogue with its emigrated citizens, including the repeated claim that the price be reduced for the issuance of passports, one of the most expensive in the world, and that the biennial payment to keep it current be eliminated.

“It is one of the topics that are frequently discussed in all the meetings held with Cubans (residents abroad) and it is a topic that is in conversation, that is under analysis,” said Soberón in response to the Spanish agency EFE.

According to the official, the main objective of Cuban migration policy “is and will continue to be to strengthen ties” with its community abroad, which is estimated at around two million people.

Regarding the high cost of the Cuban passport and its fee for extending it every two years, he said that the island’s government is “fully aware” that it is one of the pending issues.

“This is one of the topics that is frequently discussed in all the meetings with Cubans abroad, and it remains in conversation, in analysis,” he acknowledged.

Soberón pointed out that the policy towards the Cuban community abroad “is kept under constant analysis” and that “there are no taboo subjects that cannot be discussed between Cuba and its nationals abroad.”

“In the future we will continue along the same lines,” he concluded.