The collection of a fee for each month of extension of the stay abroad has generated concern and rejection among Cuban emigres. 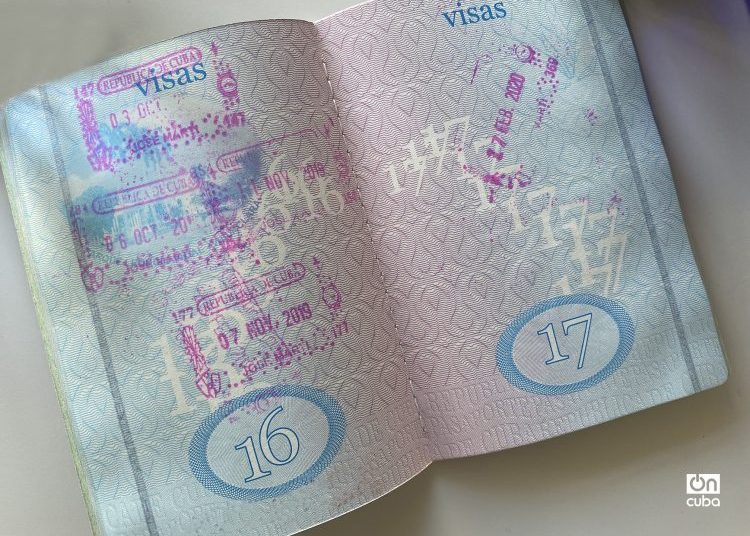 Cuban citizens must pay a fee for each month of extension of their stay abroad approved as of October 12, 2020. This has been communicated by several consulates, through their web pages, social networks and even through audios sent directly to groups of the Cuban community in each country.

So far, there is no official statement regarding this charge, which was not announced in the information note released by MINREX on October 9. It only establishes that, due to the measures to combat COVID-19, the extension of the stay abroad is authorized until October 12, 2021, “without losing their status as residents in the national territory,” for “Cuban and foreign citizens with permanent residence in the national territory who had approved extensions of stay or the term of 24 and 12 months was expired, respectively as of March 19, 2020.”

Therefore, the news that this authorization is accompanied by the collection of a monthly fee has been received with surprise in many cases and with displeasure, in general. This is confirmed by several people who spoke with OnCuba. Leandro, a resident in Argentina, maintains that in his close circle “no one is happy that the Cuban government begins to collect extensions of stay abroad. We were hoping that it wouldn’t happen in a circumstance like this one.”

“By God, how outrageous. Why are we to blame for this pandemic? If there are Cubans here who don’t even have enough to feed their children. Giving money to not lose residence in your own country…,” laments a Cuban in a group in which the news was released.

With travel restrictions still in place in many parts of the world, and the Havana airport closed with no definite opening date, planning a trip to Cuba in the coming months is impossible or extremely difficult for many people. The free extension of their stay abroad, announced on March 19, eased the pressure for a while.

Decree Law 302 of 2012, as part of the immigration reform, establishes that the person must enter the country at least once every 24 months to maintain the status of “Cuban citizen residing abroad.” After 24 months without traveling to Cuba, an extension may be requested and, with prior approval, the corresponding fee may be paid for each extended month. This fee varies according to the country of residence. Therefore, it is not a new measure, but rather the application of what is established for ordinary circumstances, in an extraordinary situation. A good many of the arguments rejecting the measure is based on this idea.

Traveling to Cuba becomes a requirement to preserve rights on the island; Cuban law restricts various citizenship rights to legal residence in the country. For this reason, people often refer to this issue as “maintaining” or “losing rights.”

With those terms, Anileydi, resident in Ecuador, mentions it. She says that she still hopes she won’t “lose her rights” if this charge, which was communicated to her by an audio from the consulate, “is recalled.” She shares that desire with Jorge, who lives in Brazil. “I’m waiting for a statement from Cuba before making a decision because I think the measure of collecting the extensions was taken lightly. For me it has neither head nor tail and I hope it will be rectified,” Jorge tells us.

He relates that he planned to travel to the island in May of this year, but it was not possible due to the pandemic. Now it’s his first month of extension. “I thought that from the moment Cuba canceled the flights, that time would not be considered by them in their 24-month count. It is absurd that they charge us after the permit has expired. People are not stopping traveling because they don’t want to, but because of the health situation that exists, and the restriction measures,” he says.

Jorge has been told that he must pay 240 reis for each month of the extension (about 60 dollars, depending on the change), but it has not been possible to verify that figure through the consular authorities in Brazil, by any means. Anileydi, according to the information published by the consular services in Ecuador, would have to start paying 40 USD as of March 2021, when 24 months have passed without traveling to Cuba. Her husband and their two minor children would already have to pay as of October. “In my home it is 160 dollars a month, plus the 25 that the application for each one costs…plus the trip,” she calculates with anguish.

Anileydi’s husband suffered a heart attack last year. That’s why he was unable to travel to Cuba in January, when he planned to do so. He was hospitalized for a month and on compulsory rest for another. With that, their income, the only sustenance for the family, began to decrease. Then came COVID-19, more reductions in income, arrears in their payments.… For this family, the most viable option is to renounce their current immigration status.

The Argentine families mentioned by Leandro are in a similar dilemma. According to the information available on the website of the Cuban consulate in that country, 3,400 Argentine pesos (44.59 USD at today’s official exchange rate) must be paid for each month of extension of stay and 2,125 (28.26) for the application. “Those twenty people of whom I speak are in turn eight families. Some have a child or even two,” says Leandro. “Let’s say, for example, if anyone has, like me, the misfortune of an expired passport at the same time, then they must add the figure of 20,825 pesos (about 269 dollars) to be in order and ‘not stop being Cuban,’” he adds.

Following this logic, the new measure contradicts the declared spirit of the immigration reform of October 2012. Since then, various official statements have defended the existence of an “irreversible” and “progressive” process of improvements in the relationship between the nation and its emigration.

A Cuban resident in Spain has started an online petition that, at the time of writing this article, collected nearly a thousand signatures. “Most countries keep their borders with Cuba closed in the midst of a pandemic that continues to worsen the health, social and economic situation of people around the world. Humanitarian flights are rare and expensive, and travel becomes more prohibitive if we have to use our savings to pay the consulates for extensions before we can buy a plane ticket. We ask the Cuban Presidency and the Ministry of Foreign Relations to empathize with the thousands of Cuban citizens who are in a precarious economic situation, unemployed or studying and cannot return to Cuba. We ask that the monthly payments be eliminated and only the fee is required to present the application for an extension of stay abroad,” says her request.

Meanwhile, both the Cuban consulate in the United States and agencies that take care of these procedures in the country have told several users that it has not yet been fully determined how to proceed with the procedure for the extension authorized for Cubans due to the emergency of COVID-19. The Cuban Embassy in the United States has not communicated if it would be necessary to make monthly payments and what the amount would be, until they have been notified of all the details.

Cuba and its emigration

The negative reactions that the measure has provoked in Cubans residing outside the island, as reflected in the aforementioned testimonies, refer to the health and economic situation generated by COVID-19, and its specific consequences on the migrant population. They also refer to the place that the relationship with emigration holds for the island’s government.

The Cuban government and emigration

Since the 1960s, the figure of the “definitive” migrant was deprived of civil and political rights. The situation changed, in significant aspects, as of 2012. For example, Decree-Law 302 eliminated the “permit” to enter and leave the country and repealed Law No. 989 of December 1961, which provided “the nationalization through confiscation in favor of the Cuban State, of the goods, rights and assets of those who are permanently absent from the country.”

In accordance with this norm (Art. 9.2), “Cuban citizens are considered to have emigrated when they travel abroad for private matters and remain uninterrupted for a term greater than 24 months, without the corresponding authorization; as well as when they live abroad without complying with current immigration regulations.”

In case of not wanting or not being able to pay the amount required on a monthly basis for the extension, the person involved would become an “emigrated Cuban citizen.” In addition to not being able to retain the rights granted by the status of “Cuban citizen residing abroad,” the Civil Code (Law No. 59 of 1987) maintains in force “having definitively left the country” as an absolute cause of inability to inherit.

The Electoral Law (2019) establishes as a requirement to exercise voting rights “to have effective residence in the country for a period of no less than two years before the elections,” in the case of active suffrage, and five for passive suffrage (to be elected).

Article 41 of the current Constitution establishes the “inalienable, imprescriptible, indivisible, universal and interdependent exercise of human rights, in accordance with the principles of progressivity, equality and non-discrimination” and regulates that “their respect and guarantee is mandatory for all.” Access to civil and political rights through an administrative channel that includes payment is not contemplated in that constitutional article.

For Leandro, one of the effects of the measure is clear. “Without COVID-19, and long before that 2013 immigration reform, many Cubans (temporary residents in other countries), because they did not have income with which to pay for frequent trips to the island, lost their residency and went into the category legal ‘emigres,’ which is the first step of an inevitable emotional estrangement. Of those I know today, some could fall into this same bureaucratic trap and are already starting to work their math.”

Hiram, a resident in Ecuador, recalls that “every citizen abroad is a cultural ambassador for his country, but if he feels that his government does not want him, that is how he will speak of it.” For him, it is a decision with palpable economic and political consequences: “Increasing resentment decreases remittances,” he argues, “in the long run, economically speaking, more will be lost than is collected by this unfair toll.” He adds that “fueling anti-communism increases neoliberal votes in the region” and delves into the most immediate of readings, the humane: “We are facing a fine that is always arbitrary, insensitive, not strategic, not intelligent. But in the current context this decision is inhumane. With citizenship rights you are born and you remain. The rights are not sold, they are not bought, they are not extorted. Rights are our humanity. Having a homeland where to arrive or return to is our right.”

Hiram concludes with a phrase whose essence is repeated in many of the comments we have heard and read about these measures: “Migrants are a vulnerable population, not ATMs.”

At a time when international trips to Cuba (and interprovincial ones from Havana) are still closed by government decision, the charge for the extension means a charge for the right to legal residence in the country, a condition that grants civil and political rights. The desirable process of recognition of migrant Cubans as full members of the national membership finds a setback in this measure.