According to Ernesto Soberón, general director of Consular Affairs and Cubans Residing Abroad of the island’s Foreign Ministry, “the vast majority of Cubans abroad and, in particular, residents in the United States, favor an improvement of relations between the two countries,” something that, in his opinion, will not change with the upcoming U.S. elections, whatever the outcome. 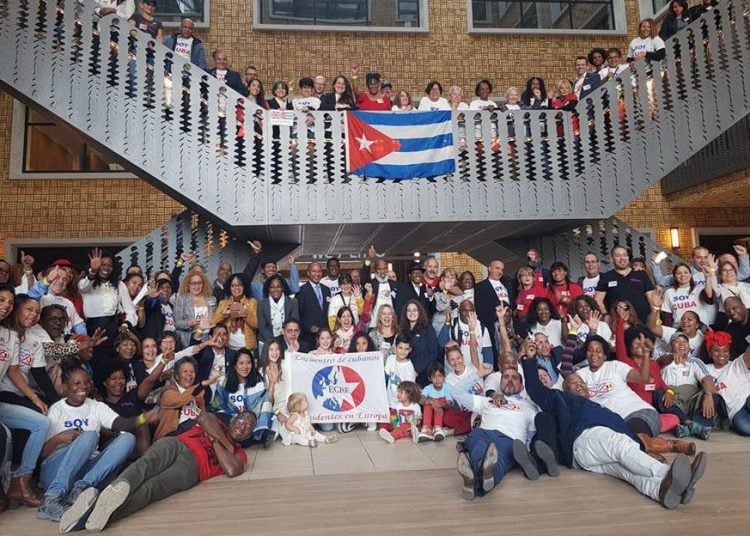 Archive photo of Cuban emigrants in Europe during a three-day meeting in Brussels in 2018. Photo: @SoberonGuzman/Twitter/Archive.

The 4th The Nation and Emigration Conference, initially scheduled for last April and which had to be postponed due to COVID-19, still doesn’t have a defined date for its holding. However, “interest in holding it continues,” Ernesto Soberón, general director of Consular Affairs and Cubans Residing Abroad of the island’s Foreign Ministry, said to OnCuba.

“With the level of uncertainty that still exists about the pandemic, with outbreaks in several countries and the complex situation that we had in Cuba in recent months that we are already leaving behind, we will have to wait a little longer to define a date when it’s considered prudent to implement it,” Soberón replied to a question from our media at a press conference held this Monday.

According to the diplomat, when it was decided to postpone the event―which seeks to promote a dialogue between the Cuban authorities and the emigration―“there was a significant number of Cubans who had expressed their interest in attending from a diverse number of countries.” For this reason, and taking into account the current scenario, the government of the island is considering it will wait until a time when there’s “normal flights and when everyone who wants to participate can do so.”

Regarding possible new measures of a migratory nature that, according to what was unofficially commented, could have been announced at the conference, Soberón did not confirm that this was planned as part of the meeting’s agenda and ruled out that it was necessary to wait for the holding of events of this type to update Cuba’s policy related to its emigrants.

“Cuban migratory policy is updated and is constantly being analyzed, and one of the achievements we have had in these 42 years of policy towards Cubans abroad is that it has not been necessary to wait for conferences of this nature to announce new measures,” explained the official of the Ministry of Foreign Affairs (MINREX), who said that this had happened in 2013, 2016 and 2018, when changes in the country’s migratory regulations were announced.

“The measures are evaluated and applied at the time it is considered most appropriate, and it’s not necessary to wait until an event is held to announce them,” he stressed, although without confirming or denying whether new measures could be announced before the 4th Cuba: The Nation and Emigration Conference takes place, if it continues to be postponed due to the pandemic.

Soberón also affirmed at the press conference that the automatic and free extension of the stay of Cubans residing abroad beyond the established 24 months―decreed by the pandemic and recently canceled and restored after a wave of criticism and comments in this regard—would remain “until it is possible to return to normality in terms of regular flights.” Furthermore, he insisted that “there are no issues that cannot be discussed between Cuba and its nationals abroad” even though he acknowledged that “not everything is resolved” in this regard.

“We are fully aware of the existing concerns, of issues that are still pending,” said the official, who referred in particular to the consular fees related to the extension of the passport and the high cost of applying for it, a constant dissatisfaction of the Cuban community outside the island and that, most likely, would focus part of the debates in the conference scheduled with the emigrants.

“This is one of the topics that is frequently discussed in all the meetings with Cubans abroad, and talks on this are being held and it’s being analyzed,” said Soberón, for whom “so far it has been demonstrated that all issues in terms of relations between Cuba and Cubans abroad have been gradually solved,” a line that, he said, “we will continue in the future.”

According to the general director of Consular Affairs and Cubans Residing Abroad of MINREX, while Cuba has developed a group of actions to best tend to its nationals outside the island during the pandemic and seeks to favor relations with the Cuban community abroad, the United States has not stopped establishing sanctions against Cuba “aimed at hindering ties between Cuban families, and hindering travel between the two countries.”

“Even before the pandemic, the U.S. government had adopted a series of measures that significantly affected the ties between Cuban citizens residing in that country―where, as it is known, our main community abroad resides―and their relatives and friends in Cuba,” said Soberón, who listed among these measures the suspension of regular and charter flights to Cuban airports except Havana, the suspension of consular services on the island and “the fact that any Cuban who wishes to travel to the United States is forced to go to a third country to apply for the visa, which makes the process more expensive and difficult.”

This is why, he said, although the COVID-19 has come to make more difficult the ties between Cubans residing in the United States and their families in Cuba, the “underlying anomaly, the aberration” is really “the policy of aggressiveness that the U.S. government has developed against our country, especially the current administration, which affects all Cubans, both those here and there, without discriminating where they reside.”

However, Soberón affirmed that for him it was “very clear” that, despite the embargo and Washington’s hostility towards the island, “the vast majority of Cubans abroad and, in particular, residents in the United States, favor an improvement of relations between the two countries,” something that, in his opinion, will not change with the upcoming U.S. elections, whatever the outcome.

“The issue of how the elections in the U.S. can affect Cuban families divided between the two countries is a question for whoever is elected in November,” the diplomat replied to the AP agency.

“What I’m very clear about,” he added, “is that, despite the intensification of the blockade, the financial persecution, all the obstacles to sending remittances to Cuba, and all the hysteria that has been created around Cuba, the majority of Cubans in the United States favor an increase in trade relations with the country, favor an increase in the sale of medicines, favor the lifting of sanctions during the COVID-19 period―as there have been petitions in social networks that, in some cases have even received more than 20,000 signatures―, favor flights to all Cuban provinces, favor the reestablishment of consular services in Havana and not having to travel to third countries to obtain the visa.”

“In that sense, I don’t think that position will change beyond the U.S. elections in November,” he concluded.