Sources from the delegation of the Ministry of Tourism in the central Cuban province of Ciego de Ávila explained that, after starting the high tourist season, the Cayo Coco International Airport received some 27 weekly flights, a figure that has increased to more than 35 during the current month of January. 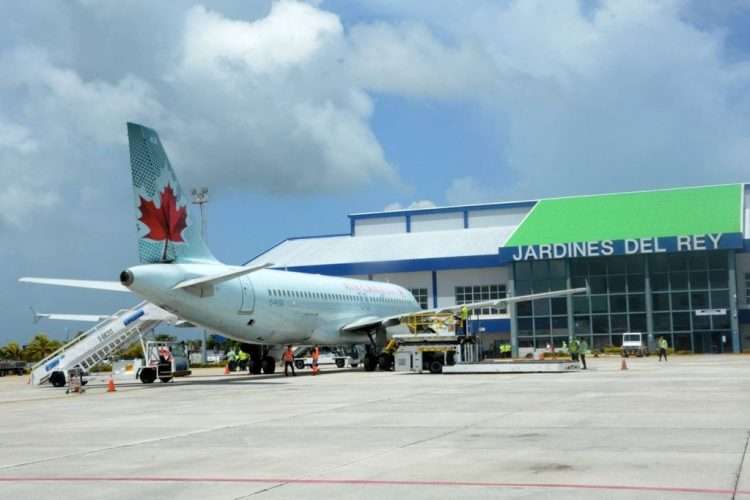 Flights to Jardines del Rey, one of the main touríst destinations in Cuba, have increased to exceed 35 weekly frequencies in the first month of 2020.

The above reaffirms this place as a “safe destination for travelers of different nationalities, despite the epidemiological complexities in the world,” according to the island’s sector authorities quoted by the Agencia Cubana de Noticias (ACN) news agency.

Lubia Olivera, a specialist of the delegation of the Ministry of Tourism in the central Cuban province of Ciego de Ávila, explained to the media that after starting the high tourist season, the Jardines del Rey International Airport received some 27 weekly flights, a figure that has increased during the current month of January.

According to the source, during the past year, the majority of arrivals at the air terminal located in Cayo Coco came from Canada and Russia, but now they also arrive from other countries, among which she highlighted Mexico, which “point to a diversification of the tourist source markets.”

For this reason, she said, Jardines del Rey has been reopening its facilities to increase accommodation capacities. “Currently, some 15 provide services, including the Kempinski Cayo Guillermo and Iberostar Daiquirí hotels, which joined operations on January 3,” said Olivera, who did not detail the current occupancy rate of these facilities or the tourists/day average figure in the destination.

The specialist did add that “at the start of the winter season, the Iberostar Selection Esmeralda and El Coral Level hotels were launched on the market, both belonging to the Gaviota Hotel Group and located on Cayo Paredón Grande, to the east of the Jardines del Rey archipelago.”

In addition, “given the increase in the number of visitors, control measures are being reinforced at the international airport and hotel and non-hotel facilities, according to the protocols established by the Ministry of Public Health,” she said, quoted by the ACN.

For her part, Dr. Tatiana Artiles, department head at the Molecular Biology Laboratory of the Roberto Rodríguez Hospital — in the nearby town of Morón —, pointed out that as part of the guarantee for tourist operations, up to 500 daily PCR tests are processed, while “when the flights arrive, travelers are checked randomly and, in the case of Canadians, all are checked before returning due to the requirements of the tour operators, based on existing agreements between Cuba and Canada.”

According to the tourist authorities, all the facilities of the Jardines del Rey destination are certified with the Healthier and Safer Tourism condition, which also enables the operation of non-hotel services, as well as offers for nautical activities, fishing and diving.

The Jardines del Rey archipelago is located north of central Cuba, and includes keys such as Coco, Guillermo, Cruz and Santa María. As part of the development of its hotel plant, planned until 2030 by the island’s government, construction of new facilities is underway in places such as Cayo Paredón Grande.

The tourism industry is one of Cuba’s main economic lines, and is currently trying to recover after suffering a considerable decline as a result of the pandemic. The authorities of the sector have set the number of visitors they expect to receive in 2022 at around 2.5 million, an amount higher than that of the last two years, but still far from the more than 4 million of previous seasons.