The director of the Finlay Vaccine Institute, Vicente Vérez, specified on state television that the percentage has been obtained from the intermediate study of the results in the volunteers to whom two doses of Soberana 02 were applied 28 days apart. 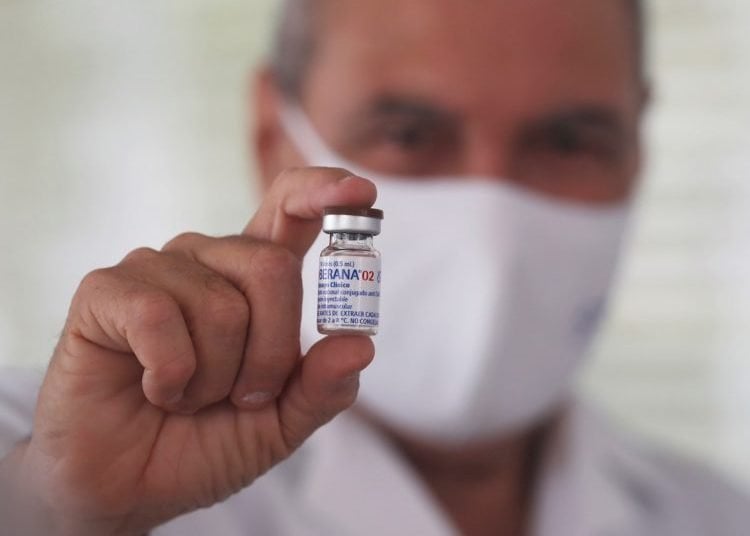 The director of the Finlay Vaccine Institute, Vicente Vérez, shows a vial of the Soberana 02 vaccine candidate in Havana. Photo: Ernesto Mastrascusa/EFE/Archive.

The Soberana 02 vaccine candidate against the coronavirus, developed by Cuba’s Finlay Vaccine Institute (IFV), showed a 62% efficacy in the preliminary studies of the third phase of clinical trials, the scientists responsible for the research reported this Saturday.

The director of the IFV, Vicente Vérez, specified on state television that the percentage has been obtained from the intermediate study of the results in the volunteers to whom two doses of Soberana 02 were applied 28 days apart.

This formula, one of the five being studied in Cuba, is a subunit conjugate vaccine — traditionally very safe — that combines the virus antigen and tetanus toxoid to stimulate the response of the immune system.

Vérez described the result as “very comforting,” because it has been obtained in a scenario of circulation “of the most worrying variants due to their transmissibility.”

He also stressed that these results meet the requirements of the World Health Organization (WHO) to consider a candidate under study as an “effective vaccine,” since that body establishes a minimum efficacy of 50%.

The IFV scientists advanced that in the coming days the authorization of emergency use of Soberana 02 will be requested from the Center for State Control of Medicines, Equipment and Medical Devices (CECMED), the regulatory body in Cuba.

Once approved for emergency use, Soberana 02 would officially acquire the category of vaccine and would become the first COVID-19 vaccine developed in Latin America.

The result announced today was obtained by an interdisciplinary, independent scientific committee, with professionals from the Pedro Kourí Institute of Tropical Medicine, the Center for Molecular Immunology and the Ministry of Public Health.

Once the preliminary efficacy result of the two-dose administration scheme is known, the second scheme used in clinical trials, consisting of two doses of Soberana 02 and one dose of Soberana Plus, remains to be seen.

According to Vérez, they hope to have this data in about two weeks, and that the efficacy achieved by this three-dose scheme is higher than the 62% obtained by the two-dose one.

The third phase of clinical trials of Soberana 02, carried out entirely in Havana with a double-blind protocol and placebo group, included 44,010 volunteers aged between 19 and 80 years

The third phase of studies was also carried out in parallel in Iran, by virtue of an agreement with the Pasteur Institute of that country, which has just announced that at the beginning of next week it could authorize its emergency use — in that country the Cuban formula has been named Pasteur.

This clinical trial of Soberana 02 in pediatric ages also began this week, initially with a group of children between 12 and 18 years old.

“Congratulations Cuba. On the eve of Father’s Day and 13 months into the search for a Cuban vaccine, it is confirmed that with 2 doses, Soberana 02 reached a good percentage of efficacy. Soon we will know the data with the third dose of Soberana Plus, which must be higher,” Cuban President Miguel Díaz-Canel wrote on Twitter.

Cuba has a second vaccine candidate in the last phase of clinical trials, Abdala, developed by the Center for Genetic Engineering and Biotechnology, and whose efficacy is also expected to be known shortly.

Both Soberana 02 and Abdala have already been administered to tens of thousands of Cubans as health intervention studies and parallel to clinical trials.

According to official figures, a bit over two million Cubans, out of a population of 11 million, have received at least one dose of these formulas.

Cuba is not a member of the COVAX Mechanism of the World Health Organization created for low- and middle-income countries to access vaccines, nor has it purchased them on the international market.

The country, which has been going through the third and worst wave of infections since January, accumulates 166,368 infections and 1,148 deaths from COVID-19 to date.