The island’s health institutions have administered 1,843,490 doses of both COVID-19 drugs, still awaiting the results of the third phase of clinical trials. 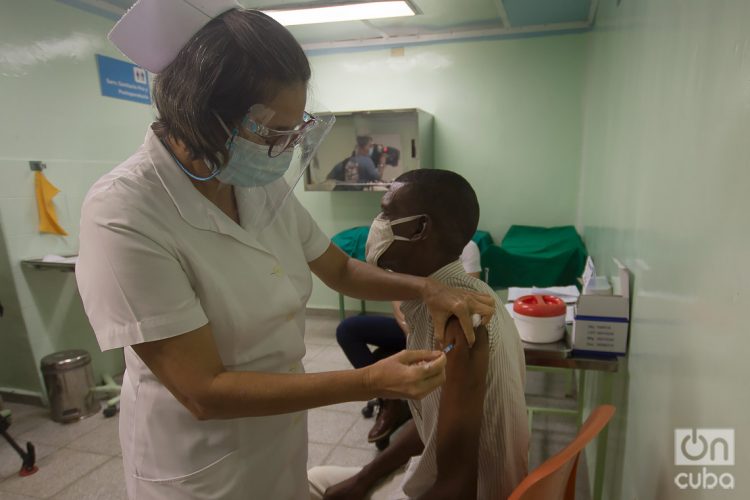 Cuba has already inoculated more than a million persons with some of the island’s own COVID-19 vaccine candidates, according to official sources.

As of May 30, 1,071,041 people in the country had received at least one dose of the immunogens developed by Cuban scientists against COVID-19. Of these, 628,409 people already had the second dose and 144,040, the third, according to the statistics published by the Ministry of Public Health (MINSAP).

In total, the Cuban health institutions had administered 1,843,490 doses of the Cuban vaccine candidates, mainly Soberana 02 and Abdala — the most advanced —, still awaiting the results of the third phase of clinical trials and the regulatory authorities’ authorization for mass vaccination.

These doses have been injected as part of human studies and ongoing health interventions in population groups and territories at risk.

According to the MINSAP, in the clinical trials developed to date with Soberana 02, Abdala and Soberana Plus — the latter as a booster for the first and also for convalescents — 149,364 doses had already been administered between Havana and the eastern provinces of Santiago de Cuba, Granma and Guantánamo.

This figure excludes the doses of placebos administered in the studies, the Cuban health authorities specify.

As for the intervention studies associated with the investigations of Cuban vaccine candidates, and carried out in health workers, scientific personnel and in other risk groups in the capital and the eastern part of the country, 400,317 doses had been injected to date of Soberana 02 and Abdala.

Finally, in the health intervention already underway in risk groups and territories on the island, as a previous step to mass vaccination, 1,293,809 doses had already been administered, although only 431,999 people had received the second and none yet the third.

Regarding the intervention, the head of the National Department of Primary Health Care in Cuba, María Elena Soto, affirmed this Tuesday that it is progressing “as planned in the schedule.”

“It is a complex process, and the setbacks that arise are resolved by the factors that are involved in this task, which demonstrate their efforts, unity and responsibility,” said the specialist, quoted by Prensa Latina agency.

Soto recalled that volunteers aged over 18 years participate in the intervention, except for pregnant women, postpartum women, convalescents from COVID-19, persons allergic to thimerosal and with acute illnesses and uncontrolled chronic conditions.

The island’s health authorities have announced that mass vaccination against the infectious disease could begin this month, once “an emergency use or registration permit” is issued by the regulatory agency. Their aim is to reach 70% of the entire population by August and this year vaccinate all Cubans who are fit and give their consent to do so.