It is the largest forest fire so far this year in Cuba, the extent of which is greater than all those that previously occurred in other Cuban territories. To date there are already a total of 545 hectares of burned forests in the country. 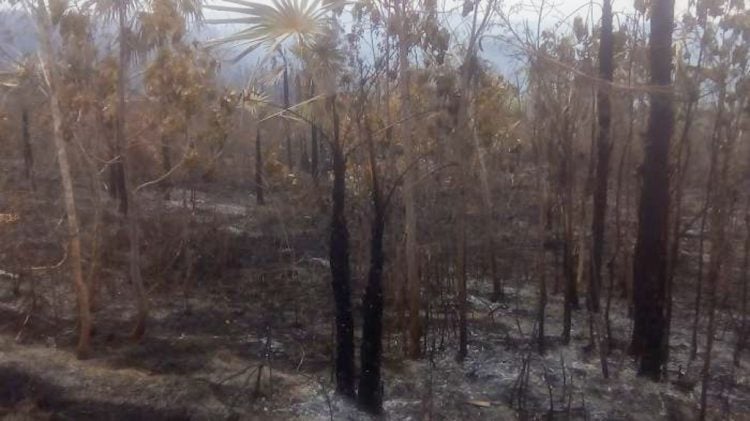 The largest forest fire registered this year in Cuba destroyed around 340 hectares of forest in the municipality of Manuel Tames, in the eastern province of Guantánamo.

The president of the Municipal Defense Council, Yunior Direntaud, pointed out that the fire originated in Alto del Zorzal, belonging to the people’s council of La Caridad de los Indios, and damaged the refuge of different species of birds, reptiles, and other species of wildlife fauna, Granma newspaper reported.

According to the source, it is the largest forest fire so far this year in Cuba, whose extension is greater than those that previously occurred in Artemisa, Villa Clara, Matanzas, Holguín, Santiago de Cuba and Isla de la Juventud, put together. To date, there are already a total 545 hectares of burned forests in the country.

Direntaud explained that the coordinated action of the Forest Ranger Corps in the locality together with the personnel of the state forest and grain-based units prevented further damage.

“It was necessary to open fire trails and use alternative means, teams of oxen even transferred water to the area of ​​the fire that, however, spread quickly, helped by the force and direction of the winds,” he explained.

The fire has already been put out and “constant vigilance” is being maintained throughout the affected area to prevent possible flare-ups, local authorities said.

Rafael Wilson, forest protection specialist with the Guantanamo Forest Ranger Corps, lamented the damage caused by the fire to a forested area with extensive biodiversity.

“The ecological niche of birds was broken,” said the expert in reference to the thrush, which gives the place its name (zorzal).

“To add insult to injury, the fire happened when the courtship, mate selection, mating and reproduction of the birds had begun,” he added.

Quoted by the state newspaper, Wilson stated that in addition, the area was home to bees, jutía congas, and the species of majá de Santamaría and other reptiles, insects and rodents, which had to migrate to nearby forests and now will take time to return to their “vegetable city.”