byOnCuba Staff
in Science in Cuba
0 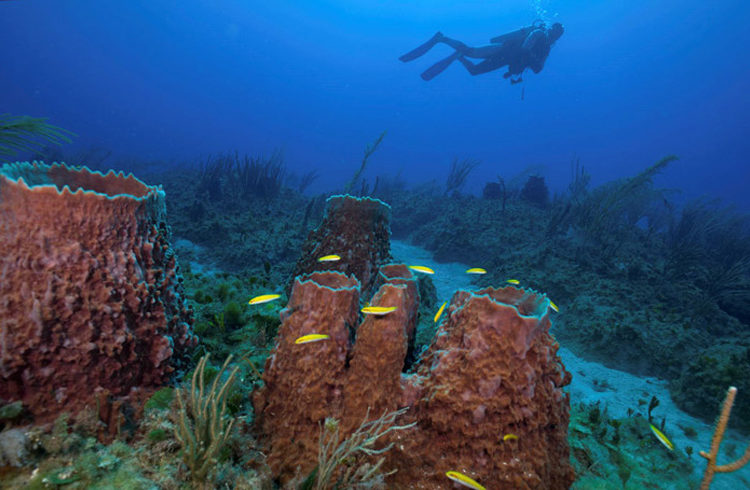 A research by Cuban and U.S. scientists on the island’s coral reefs revealed their “excellent health” and the existence of more than 130 species of fish and 260 of sponges living in those coastal zones.

The expedition, which covered 1,430 nautical miles and lasted more than 20 days between the months of May and June, made it possible to observe the distribution of the communities of mesophotic coral reefs – ecosystems that depend on light – at a depth of between 30 and 200 meters, compare their health and connectivity with others in the North American southeast and the Gulf of Mexico.

In addition, the state of the algae and other species that live in the so-called ocean’s twilight zone was analyzed.

The scientific head of the investigation was U.S. academician John Reed, with more than 40 years of experience in the study of the coral reefs, who at the close of the trip recognized that the results had surpassed expectations.

Among the findings of the researchers of both countries, who sailed on board the U.S. F.C. Walton Smith research ship, where the non-common species in the area. They included the brown algae (Sporochnus pedunculatus) at a depth of 45 meters in Cayo Sabinal, located in the archipelago to the north of the eastern province of Camagüey, according to the report in Juventud Rebelde newspaper.

2. Part of the Cuban and U.S. scientists who participated in the study. Photo: Cuba’s Twilight Zone Reefs and Their Regional Connectivity.

Part of the Cuban and U.S. scientists who participated in the study. Photo: Cuba’s Twilight Zone Reefs and Their Regional Connectivity.

Moreover, in the zone of Cayo Coco, also belonging to the Sabana-Camagüey archipelago, a record of a depth of 62 meters for the calcified green algae (Udotea occidentalis) and of 120 meters for the Anadyomene species was registered.

Another important result of the study showed the existence of a great amount of chlorophyll in each deep stage – less than 150 meters -, which indicates the presence of algae at this depth, an important source of food for corals and other organisms.

In the first stage of the study which covered – between May 17 and 19 – the northern and southern coast of western and central Cuba from Havana to the province of Cienfuegos, the scientists said they saw an “impressive” amount of marine species.

The second stage – from May 31 to June 11 – continued the study along the southern coast to the Cuban capital.

A remote operated vehicle (ROV), property of the University of North Carolina in Wilmington, was used in the study to shoot high-quality videos and photos. In addition, the CDT oceanographic wave measured the water’s abiotic parameters.

“Water samples, of its quality and aspect, were taken at all the visited sites. This was something that had never been done with such a complete profile, from the five meters to the 300 and 400 meters in depth,” Dr. Patricia González Díaz, director of the Marine Studies Center of the University of Havana (CIM-UH), commented at the end of the exploration.

Meanwhile, the director of the National Center of Protected Areas of the Ministry of Science, Technology and Environment (CITMA), Carlos Alberto Díaz, explained that a “healthy atmosphere” was confirmed, with sufficient dissolved oxygen, which will help to have a basic line for future works in relation to the incidences and the mitigation of the effects of climate change.

The institutes for oceanic exploration, research and technology of the Atlantic University of Florida and of Marine and Atmospheric Studies of the University of Miami participated in this joint expedition.

The departments of the CITMA’s Environment Agency took part for Cuba, as well as the Center for Marine Studies of the University of Havana, the Institute of Sea Sciences, the National Aquarium and the Institute of Meteorology.

This scientific incursion formed part of the Plan of Activities signed between the U.S. National Oceanic and Atmospheric Administration (NOAA) and National Parks Service and Cuba’s CITMA in November 2015.

The Cuban and U.S. governments in late 2015 signed a bilateral agreement on environment matters in order to strengthen the protection of their biodiversity and their coastal ecosystems and another memorandum of understanding for the conservation of protected marine areas.

The agreements are part of the 22 achieved in the process of rapprochement between both nations initiated with the administration of former U.S. President Barack Obama, which could be affected with the change of policy toward the island announced by President Donald Trump.

In 2016 the scientific cooperation between marine researchers from Cuba and the United States showed another important result when the aquariums of Florida and the National of Cuba joined in a program of restoration of the coral reefs which in the next years is expected to increase the populations of these organisms in the common region.

A Cuban bishop for Cleveland