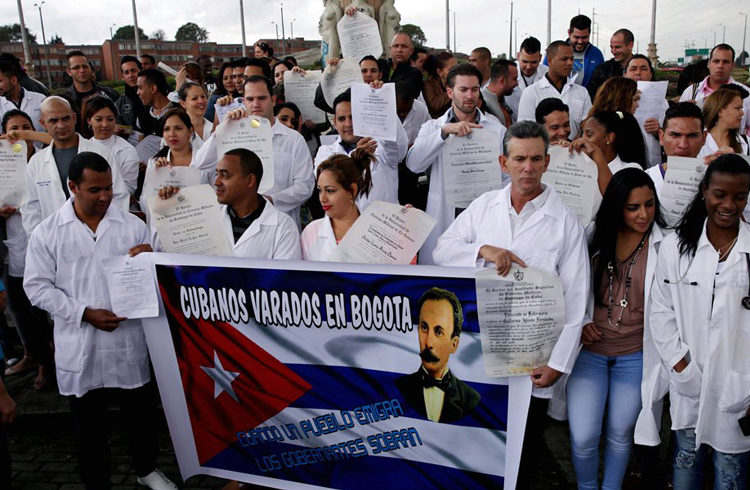 Cuban doctors protesting in Bogotá, Colombia, in 2015, demanded a reply to their visa applications. Photo: EFE.

A first group of Cuban doctors stranded in Colombia after the last migration agreements between Cuba and the United States traveled to Miami on a direct flight from Bogotá.

They include around 20 health professionals who had abandoned their medical missions abroad and had requested the Parole the U.S. government was giving before it was suspended by the Obama administration last January 12.

This figure could increase since, according to Maikel Palacios, the Cuban doctors’ spokesperson, “another flight planned for Friday was suspended.”

According to what Palacios commented to several media, dozens of visas have been issued since the elimination of the program created in 2006 by then President George W. Bush. Although the migration agreements established its immediate application, the U.S. Department of Homeland Security (DHS) announced that the pending Parole application cases would be processed.

The doctors who flied to Miami had been waiting for months for the visa needed to enter U.S. territory. In the last year, the delay in the processing of the applications increased the amount of Cubans stranded in Colombia to some 300, according to the doctors’ own estimates.

“Those who presented their visa application last November 3 have already met the period of time established by the program, 90 days, for the embassy to respond,” commented Palacios. However, since before then, others have been waiting for the official reply.

More than once the island’s health professionals in Colombia expressed they wanted the legal process to be speeded up and that they receive an answer to their applications.

Some 20 doctors and health technicians who were in transit to Colombia the day the migration agreement was signed have joined this group. They are in a legal limbo, not being able to request a visa to enter the United States or to benefit from of the Parole program.

It is estimated that in its 10 years of existence, more than 8,000 Cuban doctors and health technicians have arrived in the United States through that means, many of whom received help from organizations like Solidarity without Borders to revalidate their titles and form part of that country’s medical system.

The granting of the Parole to Cuban professionals was considered by the island’s government as “an attack against the Cuban humanitarian and solidarity medical missions in Third World countries.” Its elimination by the Obama administration was received as an “important step in the advance in bilateral relations.”

This Friday the Cuban Ministry of Public health insisted on its willingness that the sector’s doctors and technicians who had abandoned their collaboration mission return to the island.

The note, published in the daily Granma, alludes to the government’s willingness for their reincorporation to the National Health System “as they have been doing since 2014, according to the immigration regulations in force.”

The note also points out that “the international medical collaboration that Cuba provides has as principles voluntariness and the integral attention to the needs of the cooperation workers in and outside the country,” and estimates the current number of Cuban collaborators at some 50,000 distributed in some 60 countries.