Cubans in Mexico will be able to apply for political asylum 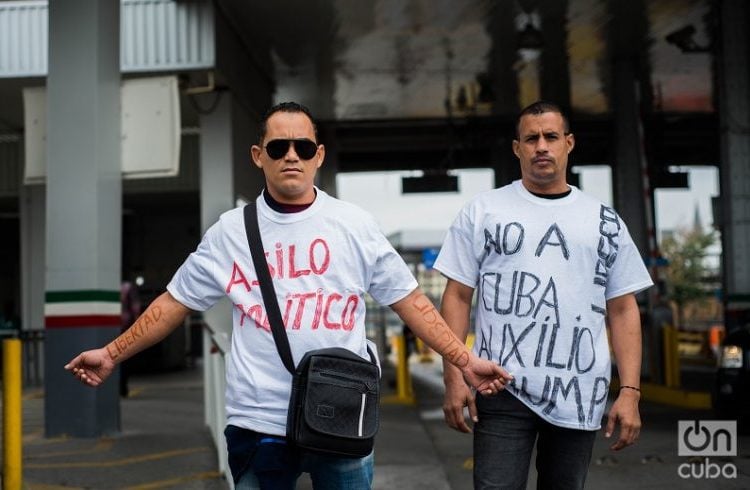 The Cubans stranded in Mexico after the end of the “wet foot/dry foot” policy will be able to apply for political asylum in that nation. That was the result of a meeting between the Mexican federal and municipal authorities, in which the situation of the island’s immigrants was dealt with.

Enrique Rivas Cuéllar, mayor of the city of Nuevo Laredo, told the press that the meeting was attended by “all the actors of the federal and state government to be able to provide [the Cubans] with the procedures. I understand that they will be subject to requesting political asylum and…being able to apply for their legal stay in the country.”

The mayor commented that “many of them have already started to regularize themselves…, are participating in the economic activity, some of them already with the installation of some commerce. Thus what is going to be done is to regularize them, as long as [it is done] in an orderly way.”

According to the Tamaulipas newspaper Milenio, with this measure the federal government provides the Cubans with “an opportunity to remain in any place in the country while the migration situation in the United States is resolved.”

The political asylum petition could benefit more than 500 Cubans stranded in Nuevo Laredo, according to Milenio. However, other sources place the number of Cuban immigrants who arrived in that city after January 12 at some 1,300. Out of that figure, as a result of a recent census, only 700 had registered in the National Institute of Immigration (INM).

To facilitate the procedures, Mayor Rivas Cuéllar commented that the Cubans can wait for the result of the process in other Mexican localities. The director of the Tamaulipas Institute for Migrants, José Martín Carmona, provided aid on behalf of his institution to travel to other states.

“We have approached them to offer free transportation to Mexico City so they can continue the procedures for their current situation. They do not necessarily have to wait for it or receive it in Nuevo Laredo, they can do so in any city in the country,” said Martín Carmona to the newspaper El Mañana.

The official underlined that the Cubans “must first register with the National Institute of Immigration to continue their legal paperwork.” He commented that “the transfer would be carried out as soon as a considerable group organizes to apply for the paperwork in the interior of Mexico, be it in Monterrey, Guadalajara or any other place where they have family, friends or work opportunity.

“We are willing to provide the transportation for this group to the city where they consider carrying out their wait,” he confirmed.

The director of the Tamaulipas Institute for Migrants explained that many Cubans have expressed their intention of remaining in Mexico. “Their intention of crossing over to the United States has increasingly decreased,” he affirmed.

However, the Mexican authorities have not specified how many Cubans could obtain political asylum nor what would happen with those who cannot regularize their situation.

After the elimination of the “wet foot/dry foot” policy by the Obama administration, which put an end to the mass admission of Cubans into the United States, Mexico has returned to Cuba more than 200 immigrants who were unable to enter U.S. territory. Most of them were retained in the state of Chiapas waiting for the so-called “official letter of exit” that would allow them to legally stay in the country for 20 days.

Other countries in the region have also returned immigrants to the island, and the U.S. authorities have even started returning Cubans who arrived irregularly in that country.

The Cuban Adjustment Act, still in force, allows Cubans to request political asylum in the United States but for this they have to remain detained until the end of the process. That, together with President Trump’s silence about Cuba and its immigrants, has led to many preferring to regularize their situation in Mexico or other countries waiting for a change that will allow them to be accepted on U.S. soil.