"Lo llevamos rizo" is a public intervention project about natural Afro hair and what it expresses. 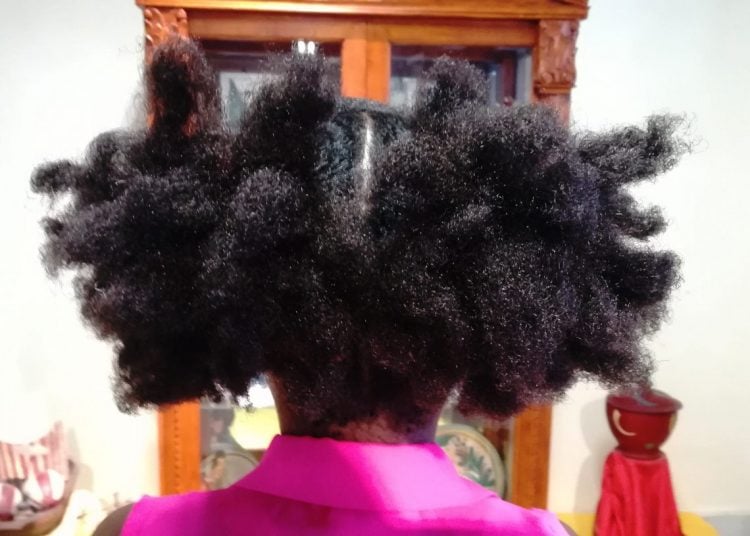 What put artist Susana Pilar on the path of Lo llevamos rizo (We wear our hair curly) was a personal experience. Rather, several painful experiences.

“On the street many times, even nowadays, I have encountered people who offend and I have even suffered direct verbal aggressions, mostly from men, sadly black men, because I wear my hair natural,” says Susana.

Over the centuries, discrimination against black people has been expressed strongly in the western aesthetic sphere, excluding from conventional beauty canons the characteristic features of this group. And all in all, the appearance of the hair has represented an indicator of great weight. Also in Cuba.

“For me it was surprising. I wanted to know if it was something that only happened to me or that happened to other people. But beyond knowing this ―because I could solve that with a questionnaire on the street― I wanted to go a step further and create, from my area of ​​action as an artist, a space to positivize natural Afro hair,” says Pilar.

Thus was born the Lo llevamos rizo work of public intervention, which participated in the 12th Havana Biennial in 2015 as part of the Entre, Dentro, Fuera (Among, Inside and Outside) Project. The artist was looking for a piece of artwork where the audience was fully active and the structure of a contest seemed ideal.

Susana Pilar imagined how to insert natural Afro hair into the Cuban cultural context and created this contest, which is accompanied by a series of workshops, lectures and activities. “The idea is that people see it as something positive,” says the creator. “I thought about how the public would react to something that is awarded.”

In 2019 Lo llevamos rizo was repeated in the Havana Biennial as a guest work of the Proyecto Detrás del Muro (Behind the Wall Project), and it has displayed its activities in the House of Africa, on 157 Obrapía Street. The actions include, among others, a guided tour of that institution, a drawing workshop for girls and boys and a turban workshop.

In 2015 the contest attracted about 70 participants, in 2019 the figure rose to 200. In the first convocation, only girls and women competed; now boys and men joined in the categories of Afro, braided and dreadlocks.

“We were very struck by the fact that, in relation to the first event, the number of women in the Afro modality increased. In the first edition there were 30, in this one it was 52. We have 52 registered women and a waiting list of about 20,” says Susana Pilar to OnCuba. The creator thinks that the success of the first edition’s contest, together with the inclusion of men and boys, has added followers to the contest.

This year’s awards ceremony will be held at Havana’s Malecón, at 6:00 p.m. on May 11, just one day before the 13th Havana Biennial says goodbye.

An anonymous jury will award prizes taking into account aspects such as hair care, design in the case of braiding, trimming ends, care of the scalp, among others. The public will also award their prizes.

For Susana Pilar it is important to make it clear that Lo llevamos rizo is not a catwalk moment. It is a series of actions to offer information, while it becomes a space for exchange between those who join. The collaborators of the project call the followers and contestants, send emails, spread the voice of their activities among a fairly faithful audience.

In that process of forming much more than a contest, the creator has made some discoveries.

“There are people who in their own home come up with resistance if they want to have natural Afro hair, in the family and even the couple,” said Susana. “I think it’s very strong, because if you decided to take the leap and have this pressure from home, it’s very difficult. The home should be the first support space,” the artist added.

Regarding the transformations in this field in recent years, she says that “five years ago the contestants argued that there was no Afro hair salon; now there are some initiatives. Maybe they do not have a 100% projection, but they are there. The intention is there,” she estimates.

“I have seen many mothers or fathers who want to learn how to care for their children’s hair in a different way and they have no knowledge of how to do it, what to do with girls above all. In the other edition we had mothers and grandmothers who thanked us,” says the creator, provoking a reflection on the impact of her project on the new generations.

“I have also understood that there are people who don’t know what to do, they don’t have the information and there are no spaces to help them orient themselves,” she says.

This lack of space for those who decide to wear their hair in a natural Afro has a very tangible expression: lack of products.

“What you find is the products to straighten the hair or keratin and there is no coconut oil, or majagua flower oil, or aloe vera, for example,” complains Susana, who complements her own experience with the network she has woven through her project. “Those are plants that we have here, we don’t have to import them,” she adds.

As part of the learning process in all directions, Lo llevamos rizo provides information on products as well as on hair types, textures…even discriminations and forms of cultural resistance.

In March this year there was a bit of everything. From the lecture Quemando la “pasa”: alis(t)ando las ideas, given by Cuban intellectual Roberto Zurbano, to a workshop on personal experiences on Afro hair care, going through a visit to the Barber Street Project in Pogolotti, Marianao or the Ama tu rizos workshop, given by Cameroonian stylist Vivi Dague.

In the House of Africa, where most of the activities took place, on Saturday, March 2, in a patio full of black women and men who mostly wear their hair natural, a young man with braids got up to share his experience: “I’m 19 years old, I work in the Electricity Company. In my work they don’t allow me to wear my hair high and I decided to braid it. It hasn’t been easy.”

A father asks how he can comb his daughter; a very old lady recounts her experience since she decided to wear her hair natural and how her daughters’ support has been essential. The audience applauds. Everyone has a story. The collaborators, specialists in Afro hair, touch heads, make recommendations for care, share their contacts, help create knowledge and awareness.

Erlys Penycook, a collaborator of the Project, intervenes and asks for an applause for those who are “in transition.” They are the people who have decided to stop the chemical treatment of their hair and start using it naturally.

“We don’t have anything against straitening the hair or keratin,” she clarifies, before insisting that the natural Afro can be worn with style, elegance, and at the same time have healthy hair, free of aggression.

Erlys is the creator of a product specially formulated for natural Afro hair.

“The idea, since the beginning,” says the founder of the Project, “has not been to say no to the keratin or the straitening, but to respect the diversity of rights and opinion, and not to try to impose beauty canons: we all coexist with what each one wants to do.”

Susana Pilar is moved by memory. As an artist she has investigated more than once what has preceded her. With a project about her grandfather, she went to the Venice Biennial for the second time. Her Jardinera project, which is now exhibited in the gallery Continua en Le Moulins, Paris, is just a sample of what history, her ancestors, the family mean to her. Lo llevamos rizo, as a work of public intervention, is not far from those strings.

For Susana, wearing her hair natural is a vital concept: “It’s who I am, how I am and how I want to be. I see it as a liberation and as a process of decolonization. Straitened hair is part of the colonization process. Since our African ancestors were brought to the Americas and forced to renounce their identity, their family, their religions, their languages, women were forced to cover their hair. Then, the fact of showing my hair as it is, represents an attitude towards this process that Afro-descendants have experienced.”

Four years after its creation, Lo llevamos rizo returns to put natural Afro hair in the spotlight of Cuban culture. It aspires to be something lasting, that transcends the space of the Biennial, and contributes to undoing the deep-rooted marks of the colonial past and the narrow ways of conceiving beauty.