The state telecommunications monopoly also disclosed that 189,000 clients have the Nauta Hogar home internet service. However, it is a “still discreet figure if one takes into account that it represents only 4.89%.” 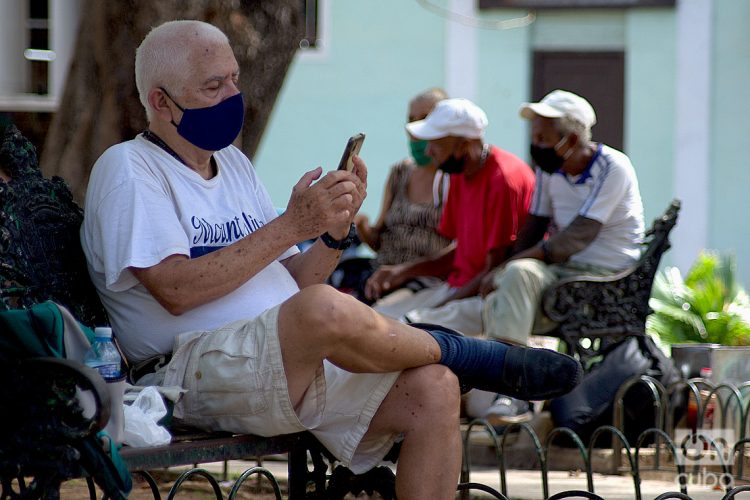 A man checks the internet on his cell phone in a park in Havana. Photo: Otmaro Rodríguez.

Some 4.4 million Cubans used mobile internet services in 2020, while the number of cell phone users rose to 6.6 million, according to officials from the Empresa de Telecomunicaciones de Cuba S.A. (ETECSA).

The state monopoly installed 816 base stations for connection to third and fourth generation mobile networks, which reached 85.61% coverage at the national level, according to figures from the entity cited by Cubadebate.

In addition, ETECSA disclosed that 189,000 clients have the Nauta Hogar home internet service. However, it is a “still discreet figure if one takes into account that it represents only 4.89%,” Cubadebate pointed out.

Company executives specified that there are currently more than 1,111 public sites where it is possible to connect to the internet via WiFi upon payment, in addition to 511 facilities that offer this service.

Since January, the company has been selling Public Private Server leasing services for hosting digital sites and software applications. ETECSA’s Director of Digital Commerce, Héctor Mora, explained that this product has the advantage of being integrated into the Transfermóvil platform to receive online payments.

Cubans were able to access the internet through mobile data since the end of 2018. However, the high prices of data packages generated protests on social networks and demanded that the ETECSA monopoly offer cheaper services.

With the monetary reorganization process underway on the island, these packages began being paid for in Cuban pesos (CUP), instead of the convertible pesos (CUC) in which they were sold until then and which are no longer used. For this, the company multiplied the old prices in CUC by 25, following the exchange rate in force until December for the sale of this currency in the state exchange houses.