Of the 80 players who represented Cuba in the U-15 World Cups held between 2012 and 2018, more than half have left the country and many have signed professional contracts with Major League organizations. 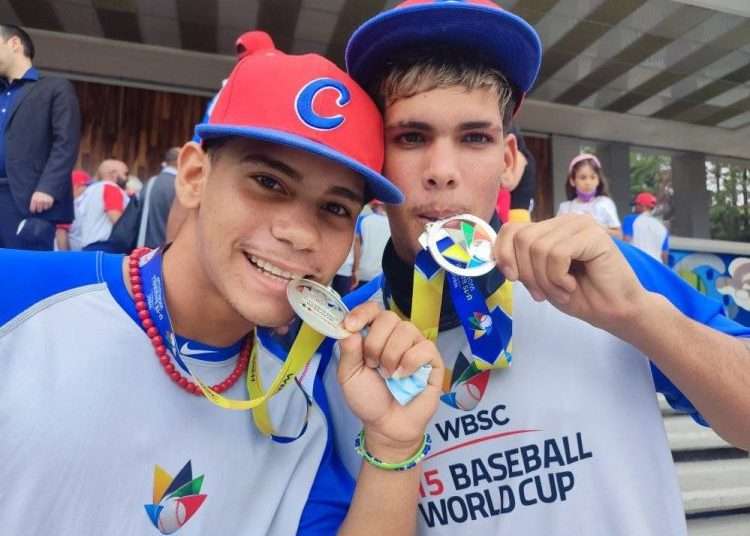 Cuba has a new generation of talent that will be difficult to retain in the current circumstances. Photo: Taken from JIT.

Twenty young Cuban baseball players altered the pulse of a nation with their great performance in the U-15 Baseball World Championship that ended last weekend in Hermosillo, Mexico, where the Cubans won the silver medal after losing by a minimum difference to the United States in the discussion for the crown.

Fighting spirit, courage and a lot of desire to have fun on the diamond were the game guidelines of the Caribbean team led by Alexander Urquiola, who managed to overcome the fifth place achieved in the previous edition of the competition, held four years ago in Panama.

The team knew how to decisively resolve most of the matches and fought to the death, even starring in some comebacks that restored the illusion of the Cuban fans. To add to the satisfaction, several players have shown that they have star caliber if they continue their rise and development.

For example, catcher Yadian Ruiz, third baseman Alejandro Cruz and reliever Daniel Reyes were included in the tournament’s All Stars, while second baseman and center fielder Jonathan Valle deserved the award for best defensive player in the World Cup.

This remarkable performance confirmed Cuba’s strength in the U-15 category, one of the few in which it has managed to remain a power in the midst of the structural and systemic crisis that baseball has been experiencing on the island for more than a decade. If we go to the results, in the last five editions of the U-15 World Cups, we have won two titles (2014 and 2016), two runners-up (2012 and 2022) and a fifth place in 2018.

* 2012 U-15 World Cup: 12 of the team’s 20 players have left the country. At least nine of them went on to sign professional contracts with Major League organizations. Johan Oviedo, Yordan Álvarez and Luis Robert have already debuted in MLB.

* 2014 U-15 World Cup: 11 of the team’s 20 players have left the country. At least seven went on to sign professional contracts with Major League organizations. Pitcher Adrián Morejón and infielder Miguel Vargas have already made their MLB debuts. Of this 2014 team, one more player (Alfredo Fadraga) was banned for life just a few months ago, after he escaped from the U-23 team’s concentration points at the Pan-American Mexico and was subsequently caught by local authorities.

* 2016 U-15 World Cup: 13 of the team’s 20 players have left the country. At least ten went on to sign professional contracts with Major League organizations.

* 2018 U-15 World Cup. 11 of the 20 players no longer have ties to the Cuban sports movement, including an athlete (César Yanquiel Hernández) who asked for his dismissal in recent months. At least five players from this group have been regulated by the island’s authorities and have been prevented from leaving the country legally.

From each of these World Cup editions there are relevant individual stories, very talented players who have managed to develop and multiply their value. As a relevant detail, most of these boys who have taken direct steps to stardom are outside of Cuba.

* Yordan Álvarez was the second batter with the best average (.571/12 hits in 21 at-bats) and the leader in on-base average (.727) at the 2012 U-15 World Cup in Chihuahua, Mexico. He scored 14 runs, drove in ten and was named to the All-Star team for the event. Yordan left Cuba in 2016, signed with the Dodgers and shortly after was traded to the Astros, a franchise with which he has become one of the best hitters in the Major Leagues.

////* Also in the 2012 World Cup, several Cuban players stood out among the most outstanding in the tournament, in which they won a silver medal. Pitcher Dannel Díaz (leader in ERA) and position players Yordan Álvarez, Rangel Ramos and Camilo Quinteiro (slugging leader) made up the All Star of the event. In addition, Alejandro Rivero was the leading in RBI, José Amaury Noroña was second in runs scored, Luis Ángel Ramos won two games and did not allow runs. Of these seven players, only Rangel Ramos continues to play in the National Series.

* Lázaro Armenteros was the leader in triples and slugging at the 2014 U-15 World Cup, held in Sinaloa, Mexico. Considered one of the best prospects in baseball, he left Cuba in 2015 and the following year he signed with the Oakland Athletics, a franchise in which he remains as a minor league player.

* Adrián Morejón had 24 strikeouts in 22 innings of work and led all pitchers at the 2014 U-15 World Cup in these departments. In addition, he was the winner of the gold medal match against the United States and took the honors as the Most Valuable Player of the tournament. The left-hander left Cuba in 2015 and the following year he signed with the San Diego Padres, a franchise with which he continues to pitch in MLB.

* Ernesto Martínez Jr. and Miguel Antonio Vargas were two of the Cuban offensive pillars in the 2014 World Cup. The man from Holguin finished as the leader in doubles, second in hits and home runs and third in RBIs, while the man from the capital scored 15 times (third in the event ) and only struck out three times in 37 official at-bats. Martínez Jr. plays today in the branches of the Milwaukee Brewers and Vargas, the third most valued prospect in the Dodgers, has already made his MLB debut.

* Malcom Núñez was the leading hitter (.613/19 hits in 31 at-bats) at the 2016 U-15 World Cup in Iwaki, Japan. He has been playing professionally in the United States since he was 18, and this season he has 21 home runs and 80 RBIs with the Double-A branches of St. Louis and Pittsburgh.

* Of the top five strikeouts in the 2016 U-15 World Cup, four were Cuban. Edgar Alberto Martínez (20), Osiel Rodríguez (14), Franny Cobos (13) and Ubert Luis Mejías (13) culminated in the leading positions in this important section. All four left the country and three of them (Edgar, Osiel and Cobos) managed to sign with Major League organizations.

* Catcher Edgar Yoel Quero was the player with the third highest on-base percentage in the 2018 U-15 World Cup. A switch hitter who is only 19 years old, he is now the third highest-ranked prospect in the Los Angeles Angels, the franchise with which he signed in February 2021. From this team, shortstop Dyan Yamel Jorge also obtained a professional contract with the Colorado Rockies and they rank him as the organization’s 15th prospect.

* Frank David González was one of the most consistent Cuban hitters in the 2018 World Cup. He led the team in triples, RBIs and runs scored and finished second in slugging, only surpassed by Kevin Alcolea. Coincidentally, these two players are among the few ranked talents that remain in Cuba, although reports from various sources indicate that they have been regulated and are not allowed to leave the country legally.

These little capsules leave us with a very clear message: Cuba has not been able to retain its main talents during the last decade. The most worrying thing is that there are no signs that it can do it now with the new generation that has triumphed in Hermosillo, where they achieved one of the most outstanding results for baseball on the Island in any category in recent years.

In fact, several players who belong to this generation and who were part of the national team at the U-12 World Cup in 2019 are no longer in Cuba, according to data from colleague Francys Romero. Such are the cases of the prospects Cristian Sáez and Johan Rodríguez, included in the All Stars of the aforementioned world event in Chinese Taipei three years ago.

Perhaps this may seem like a pessimistic message in the midst of the celebrations for the world subtitle, but the critical gaze must prevail in the analysis of Cuban baseball if we want to maintain an ascending line of development. The triumphalism and the apparent respite after a victory has already given us enough sticks so that we sit down now to gloat.

For the national sports entity, the only thing that can change the current scenario is to renegotiate with the Major Leagues in order to achieve a new agreement that regulates the flow of baseball players from the Island to the United States and, therefore, slow down to some extent the Exodus.

It’s easy to say, but there are many obstacles on the way to achieving the goal, the same ones that forced the cancellation of the previous Agreement in April 2019. One of the main arguments that MLB used three years ago to dismantle the pact that would open the doors to the signing of West Indian players without the need to leave the country, was that the Cuban Federation (FCB) maintained ties with the government of the Island.

So far, we do not know if there are ongoing negotiations and if the status of FCB as a non-governmental organization is still on the table as the main problem to be solved, but we do know that the future of the recent world runners-up in the U-15 category it is totally conditioned to the revival of the agreement.

We could theorize in endless pages about the measures to be taken internally that contribute to the development of these boys, but without an Agreement that offers them options to negotiate with Major League organizations, it will be impossible to keep them on the Island. In the current circumstances , Cuba cannot compete with the economic offers and with the possibilities of professional advancement that appear in the Major Leagues.