Strong gusts of wind, hail and heavy rains were reported. 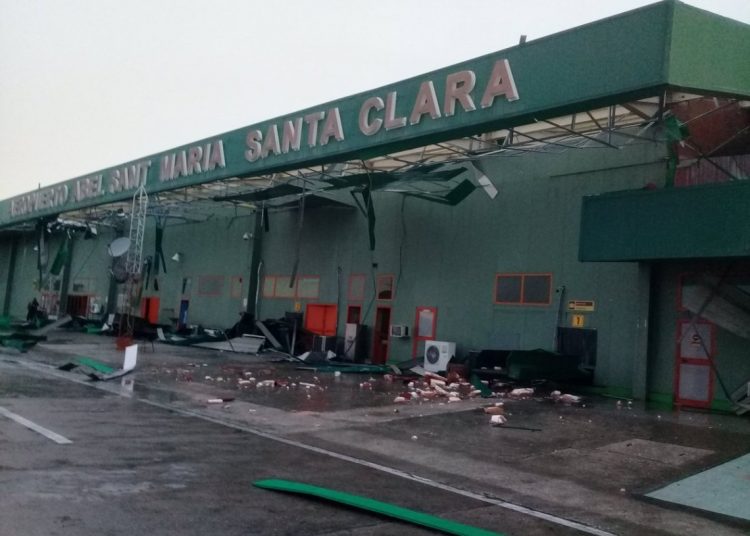 A severe local storm affected the city of Santa Clara, in central Cuba, on Sunday afternoon, while other meteorological events were reported in several Cuban towns.

According to reports from the Institute of Meteorology, in Villa Clara there were strong gusts of winds, hail, heavy rains and downed trees in different places. The capital of the province was the most affected, in particular the Abel Santamaría International Airport, where around 800 square meters of roof were damaged.

Because of this the air terminal will remain closed until further notice, and flights scheduled for Sunday and Monday were relocated to other airports such as those in Varadero and Cienfuegos, said Omar Andrés Gil, director of the airport, quoted by the Cuban News Agency (ACN).

In addition, damages were reported in some 60 homes in the communities of the Air Base, San Miguel, Frank País, Sakenaf and Caracatey, as well as power outages in a dozen circuits of Santa Clara, whose repair work started on that very Sunday.

Meteorologists confirmed that it was not a tornado.

The Institute of Meteorology also reported other severe weather events, with hail and strong winds in several Cuban towns. There were storms in the Arango area, in the Havana municipality of Guanabacoa; in the town of Los Pinos, municipality of Cabaiguán, in Sancti Spíritus; in the Loma del Tanque, in Santa Cruz del Norte, Mayabeque, and in Najasa, Camagüey.

The possible damages of these events have not been reported so far.

According to specialists, these events were due to the combination of meteorological factors that could be repeated on Monday in eastern Cuba, although to a lesser extent.

The inexorable passage of time, the one that went by…

The inexorable passage of time, the one that went by...

"The World or Nothing," a documentary about two Cuban twins in Barcelona