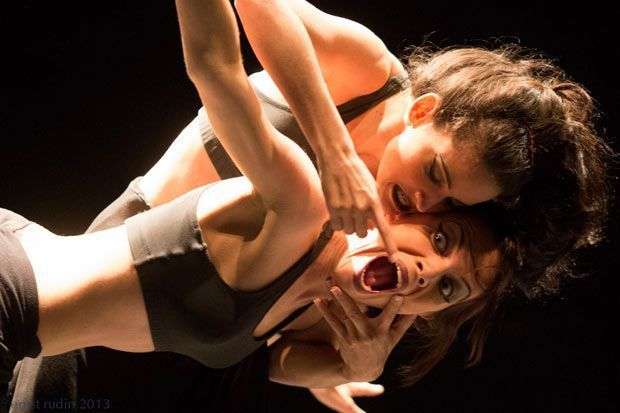 “Antigonon is the work of bad luck”, ridicules Carlos Díaz while saying that next August 10, the staging of this piece by young Cuban playwright Rogelio Orizondo, will reach the long-awaited 100th performance.

Since last September 29, every Friday, Saturday and Sunday, Antigonon: an epic contingent has been staged in Havana at the Trianon Theater, making it Cuban and reinterpreting the Greek myth of Antigone, the heroine from Tebas, from Cuban referents.

In September, 2002, with La Celestina, by Fernando de Rojas, El Público Theater Company paved the way for large theater seasons. The piece reached a total of 150 uninterrupted performances and an award for being a box-office and a season hit.

Carlos Díaz remembered the ritual: “they will place the card for 100 performances”. Then, he highlighted the usual party he set up in which the theater takes Linea Street, as it happened with Santa Cecilia and Freddie (2005), La relaciones de Clara (2007), Ay, mi amor, Una descarga by Adolfo Llauradó (2009), Noche de Reyes (2012) and Calígula (2013).

However, Orizondo is preparing a surprise “even for Carlos”. The Cuban playwright, who has also made some incursions in cinematographic scripts, says to be satisfied “with the number of people that has attended the theater for the piece and with the number of people that have come more than once”. In average, about 200 people attend each performance at the Trianon Theater, which means about 20.000 people have seen this piece by Carlos Diaz. By the end of 2013, this figure assured the piece some recognition as Cultural event of the year, of the so-called theater circle in Linea Street.

Orizondo noted on the resistance by recently majored actresses Deisy Forcade and Giselda Calero, “because there is a lot of text and a lot of emotional content”; though he regrets the lack of studies on the reception of the performances. “Yesterday I was listening to a group of young people who focused on a scene. They said it was because the language was close but it was the right one they needed for talking. Their resistance and concentration regarding the monologues called my attention”, he explained about his interest on knowing the opinion of the audience.

Diaz announced Antigonon will start a tour next year: “in January, Miami (Miami-Dade County Auditorium); in Mayo, in Paris, and in Septemberat the Buenos Aires International Festival (FIBA)”. In parallel, El Público continued staging Rascacielos, directed by Jazz Vilá, and Perra Boda, by Díaz for the performance by graphic designer Giselle Monzón, “and the whole group of graphic designers, including the Graphic Design National Award, Nelson Ponce”, the director stated.