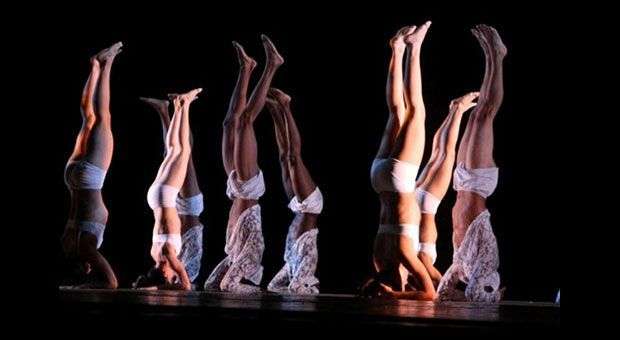 A month ago, a German-Dutch friend, with whom I dance every fortnight some salsa, said she had tickets for the presentation, in the city of Hannover, of a Cuban dance company.

Ivon could not remember exactly the name of the group; she said had just read in the newspaper an article that convinced her to attend the event. She had noticed that a piece titled Mambo 3XXI would be interpreted, and as we have a move by the same name in our salsa group, she wanted to see that such a thing danced by the “real Cuba”.

Of course Esmeralda and I immediately came up with a brilliant idea and arrived home looking for relevant information on the Internet. When we confirmed it was Danza Contemporanea de Cuba (DCC), headed by Miguel A. Iglesias Ferrer, I told her: we need to see it. You’ll love it.

Then I remembered that on December 24, 2012 I had seen a DCC, in a kind of self – gift that I got for Christmas in the Great Theater of Havana and was roundly impressed by that experienced youth that danced breaking all physical and biological laws.

We were fortunate to be able to buy two of the last three remaining tickets for the show; and for the latter were quite well placed. We got the row 11 of the Staatoper Hannover. The date ” Karfreitag ” i.e. Good Friday , April 19 .

Eventually, there was no space within me for more national pride. I took my woven purse that displays the Cuban flag and put it in the other. Inside I had the stone that I took the last time I visited the Patroness of Cuba , down in the Sanctuary of Santiago and gave it to Esmeralda to take a piece of our Cuba forever.

I did not dare to take out the tiny bag in public. However, when Identity – 1 began, the first piece performed, I squeezed it as hard as I could, as one tries to keep between fingers the good vibes of the land he loves.

Identity -1, first shown at the Mella Theater in Havana, is a piece that takes up the Cuban clave, on which Alexis O. Joya music stands, and the choreography of George Céspedes ; which made me think on the island we are , in the Orisha Yemaya and Oshun by certain movements in the scene, and the vitality of our customs , codes and symbols. Had there been more people of Cuba in that room, probably they would self- acknowledged in the work.

The displacement in the scene is what I remember with great astonishment, even though six days have passed. At that moment I regretted not being in the balconies to make out the figures that were bold. The secrecy of those movements where chests hit chests, and the domain of each millimeter of that scenario was a good prelude to what would come later.

I am not sure how many minutes of applause followed, but the truth is that few people, accounting with fingers of one hand, stood from our seats and cheered for DCC. In Germany there isn’t, as in Cuba, the habit of standing to applaud. People on this land are contained. In ours we move our entire body when we are amazed by something.
To me that that do not know anything about dance, Demo-N/Crazy made me think, before I saw it, it was a piece about the power in human relationships.

No music, I could only hear a sound that I confess identify as the one produced by a fan in a dark night, and that made me remember that there are people on the island who turns them in winter because they love the constant chirp. Nina Simone singing Ne m ‘quite pas. Then came a song by Spanish Bebe, played by a dancer who gave her heart, and I know verse by verse. There were other songs, but I do not remember.

Bravo by Rafael Bonachela and his choreography for 21 dancers. The final unexpected stop head is the most beautiful thing to be chosen to finish Demo-N/Crazy. Of course the theater raved in applause.

And the mambo came mixed with the Much Heart bolero, played by the great Benny More. Esmeralda and I felt sorry for those who do not know the Cuban music or the King of Rhythm but we sang along to it with the feelings that come from being from the Greater Antilles and not be sitting many miles away from her, enjoying such a spectacle.

They were 32 minutes more of enjoyment. Again choreography by George Céspedes, this time accompanied by the music of the National Electronics.

The tough movements that demonstrate mastery of the art and the synchrony of the company then give way to the individuality of the dancers. What start with a rigid sequence of steps, then it becomes fun positions and sensations.

I lost count on how many Viva Cuba I heard that night. But I felt that between Cuban I had to my left, Esmeralda, the other that was two rows in front of us and a kind of complicity where the only important word was Cuba and the feeling then was formed: the Cuban identity, no matter if you have been one or fifty-five years outside the Island

Note: as expected during the presentation it was forbidden to take pictures, so I had to take them from the DCC site.