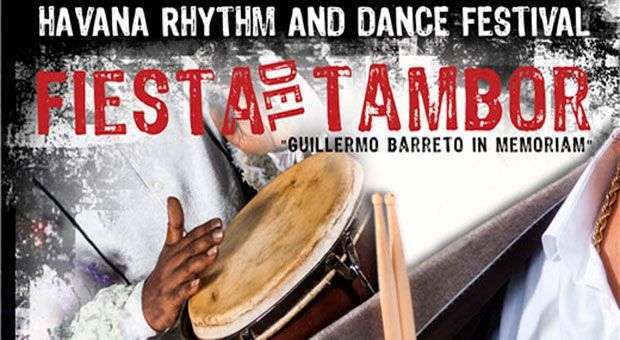 The 13th International Festival of Drums “Guillermo Barreto in memoriam”, internationally known as Havana’s Rhythm and Dance Festival is taking place in the Cuban capital with the attendance of about 1600 national and foreign artists.

The festival takes the name of Cuban percussionist Guillermo Barreto (1929-1991), a pioneer inBe-Bop Jazz and someone who accompanied with his drums great figures like US singer Nat King Cole, Benny Moré or Chico O’Farrill.

In an exclusive interview to OnCuba, Giraldo Piloto Barreto, his nephew and director of the Festival, stated that he owes his music to his uncle, which presupposes a double commitment as organizer of the event. “My uncle gave me my first drumsticks when I was 4 or 5 years old, he was the earliest and more direct influence I had. He taught me to play danzon, cha cha and many other genres. He was also a pattern for me when I began to create a style of my own”.

In addition, he said that this year the Festival pays homage to Jose Luis Quintana (Changuito), one of the most famous Cuban percussionists, to the 75th anniversary of composer and orchestra director Leo Brouwer and to the 20th anniversary of the Banrrarra dancing company.

The program of the event includes lectures from Tuesday through Thursday at the Palacio de la Rumba by important national and international figures such as Swiss drummer Jojo Mayer, who lives in the US and is one of the most outstanding percussionists worldwide. “His presence, along with Canadian Aldo Mazza and young Japanese drummer Takafumi Nikaido, is a luxury in any event”, Piloto affirmed.

Giraldo Piloto, musician, composer and director of the Festival

Piloto also pointed out that “lectures are an opportunity for the youngest to learn from renowned personalities in the music industry. The enrollment fee is 10.00 Cuban pesos and it is free for music students”.

At the rhythms of drums, Paila Criolla and bongos, music and dancing are mixed in this party, and that’s the reason why, a Salsa Contest has been added as a particular feature so that any dancer from all over the world can participate.

“The qualifying round for national contestants took place last February 27 and 15 dancing couples were selected. However, I would like to summon dancing couples from other nations. They can enroll until Friday, March 14, the date of the finals, which will be held at the Mella Theatre”, Giraldo Piloto explained.

In parallel to the Festival, a Percussion Contests is held. This time, it will take place at the same theater but on March 15 at 2 pm and there are already more than a hundred competitors. For the director of this event “the festival is unique and allows professional and amateur percussionists, regardless of their age and place of origin, to compete as equals”.

“Furthermore, this contest has discovered new talents, young talents mainly, with condition to enroll artistic education and we have made proposals for different schools. I can gladly say that today many of them are outstanding students in art academies”.

“Even though there are increasing challenges for percussion students due to the shortage of instruments and other needs, their level is higher every year. This Festival is an excellent opportunity not only for Cubans but also for anyone who feels identified with this country, to come close and take part in the music that characterizes us”.

The event will also include concerts; for instance, at the Karl Marx Theatre on March 15, on the occasion of the 50th anniversary of EGREM label, with the performance of the Buena Vista Social Club, Yoruba Andabo, Manolito Simonet y su Trabuco, Havana D’Primera, Klímax and the Santiago Alonso dancing company.

The Mella Theatre, the Palacio de la Rumba, the Salon Rosado de La Tropical and the Habana Libre Hotel are some of the venues that will host this Festival in its 13thedition, which is undoubtedly an excellent entertainment choice for Cubans and foreigners visiting the island.