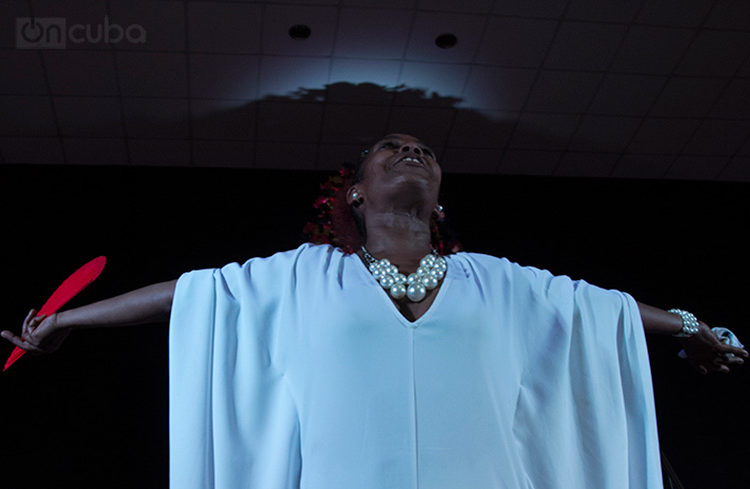 Xiomara Laugart returned to Havana again to play the most famous songs from her repertoire and share with the audience that crowded Che Guevara room at Casa de las Americas on Saturday.

This time La Negra (The black woman), as Cesar Portillo de la Luz baptized her, was accompanied by her son, pianist Axel Tosca Laugart, completely dressed in white, with her hair in the same red tousled bun the Cuban public quite recognizes.

Her special guests were Tania Pantoja and Pablo Milanes, from who Laugart said: “He always helped me , to this day, and I consider him as family.”

Although the context of Casa de las Américas seemed not appropriate to singing and dancing, those who went to see Xiomara (including also Gerardo Alfonso and a group of relatives and friends of the artist) were most of the time standing in, dancing and humming the old letters of classic Cuban music hits as Paria, De mis recuerdos and Se fue, which have always been in her repertoire.

“I see Pablo Milanes as an example, because he has always been a supporter of Cuban and traditional Cuban music. In all his albums he has tried to rescue this music. I have tried to do the same over there: spreading the beautiful music we have and the names of Cuba and Havana “, Laugart said.

Besides her son at the piano, Xiomara was accompanied by musicians like Cesar Lopez on flute, Yosvany Terry on saxophone, Néstor del Prado on bass and Rodney Barreto on drums.

The concert ended with smiles and tears while Xiomara was singing Hoy mi Habana. “My heart is already getting softly, people,” La Negra told an audience that when saw her last 2012 on Cuban stages, had already been fifteen years without seeing her in the island, after Laugart immigrated to the United States where she currently resides.