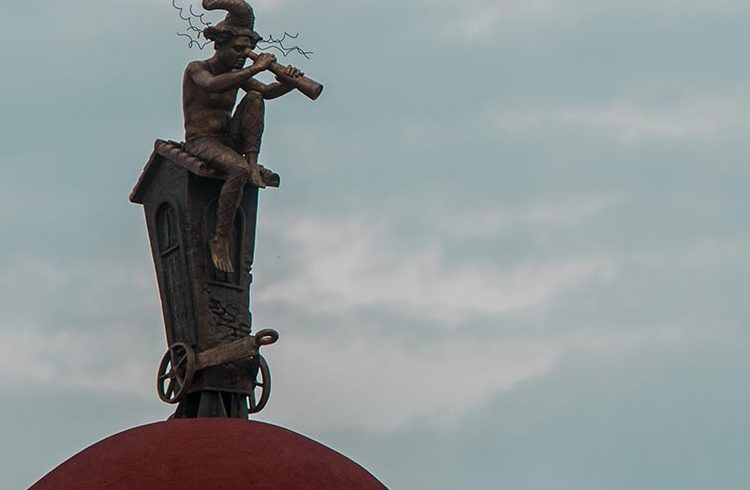 A man looks and questions everything. With his house on a wagon, he has travelled for half a millennium, and now, finally, he finds safe ground. He comes to tell legends of the crossing begun in 1514 on Punta del Guincho beach, the horrors of the massacre of Indians at Caonao village, and details of the rebellion that forced the Spaniards to seek refuge in the lands of cacique Camaguebax.

From his mud roof the snooper sees people passing and Camagüey’s intertwined streets as if five hundred years before the Spaniards to raise their hermitages without previous plan, and squares and buildings to be erected without considering the slightest knowledge of the rule and the string.

From its height he manages to interpret each square and understand the mystery of each church. Between a temple and the other he finds difficult to list the houses: all the red tiles come together to form almost one roof, almost one eave, which sometimes rises and other declines to die just a few inches after the facade.

It is the colonial city, with its high ceiling houses, its hanging covers and mud-brick walls, the one that the visual artist Martha Jimenez Perez reflects for posterity, through that happy metaphor of transporting her villa to the clouds. It is the story of the founding of Puerto Principe placed in the dome of Santa Maria Hotel, to remind Camagüey people the always laudable lesson of not to forget the past.

Walking through Republica or Cinemas Streets, the visitor is now obliged to look up. Martha has named it ¨Translation¨ but after the initiative by Encanto Hotels Chain of locates it as high as possible, people are already talking of a watchman that can be seen from afar.

A watchman, turned into bronze by the specialists of Caguayo SA in Santiago de Cuba, today knows where the large earthenware jars are hidden, at what time the sun rises in the East, who attend Mass on Sundays and which chimes are heard first in the morning every day.

“Camagüey needed a sculpture like its stories. I had long meditating upon the matter and here’s the result. I hope people to remember it over the years. Translation is, of all my creations, the most related to the history of this city, “Martha says while showing some paintings from her upcoming solo exhibition.

Martha Jimenez’s work transcends the boundaries of the community that received with urgency and needed empathy her art. More than 300 exhibitions in over twenty countries, and awards such as that of the Biennale of Contemporary Art in Shanghai, China, or the Solo Award at the 5th International Biennial of Terracotta, in Turkey, support the tour of who also holds the distinction for the National Culture.

“In Miami I was able to realize a dream. This is a series of nine unique samples, titled ¨La cera perdida¨ (The Lost Wax). It is a very old technique. It includes paste modeling and its subsequent cover with wax, which is vacuum-assembled and filled with bronze. This allows you to easily work out the details and give more movement and volume, “the artist says and thanked the Art Foundry workshops in the State of Florida, by providing her this opportunity.

The work of the also UNESCO Award for Best Set of Works by the four traditional scenes on the Plaza del Carmen, places her within the most important group of visual arts contemporary creators.

In 2002, Martha reflected in marmoline a street vendor (Matão), a newspaper reader (Subirá), a couple and three gossip black women bequeathing thus her “greatest passion and source of life”, her world of symbols and attributes, her already recognized lyrical intimacy. They all are real and ordinary characters, so like their models and the rest of Camaguey people.

-Let us go to the gallery to show you some new stuff- she says.

We left the studio and entered almost covertly, because visitors do not stop to ask for the artist. But she is not addicted to flattery.

There, the mud or bronzes pieces, paintings, engravings and drawings are located in the exact spot: above the brick floor of the former housing; in small stands; on walls, illuminated by a mixture of iridescent lights that trap you in a kind of spiritual rest.

Outside, at Plaza del Carmen, Rumbatá drums and a chorus of dozens of people is heard while the children run around Subirá.

-Yes. They want to understand, but they can not.