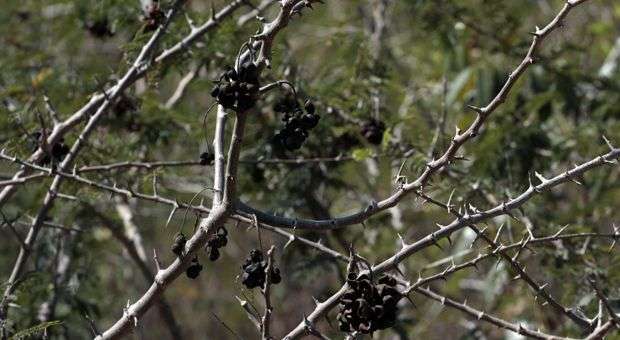 Stronger than the machete in the hands of the peasant, more devastating than fire: the offspring always return from the ashes. Cuba has, for more than two decades, been watching Marabou infested lands, and still about one million hectares of Cuban soil suffer from what appears to be a curse.

However, several studies, conducted primarily at the University of Camagüey, have shown that these large “crops” have incredible potential to generate electricity as forest biomass. This plant has a value greater than 3000 kilocalories per kilogram, while oil is 10 000 kcal, which means that three tons of marabou are roughly the equivalent to one ton of “black gold”.

During the recent XII World Wind Energy Conference held in Havana, Minister of Energy and Mines, Alfredo Lopez said some projects that are already underway and include the use of the bush, with the installed capacity of some sugar mills.

These industries generally have boilers where bagasse is burnt, and turbo-generators that allow them to produce electricity for themselves and contribute to the National Electricity System (SEN). Once all the sugar cane biomass is exhausted, they can use Marabou to produce energy.

On the bioelectrical plant of the Jesus Rabi sugar mill (Matanzas) they will ensemble a power block capable of generating 139.2 gigawatt-hours annually, of which 93.2 GW-h will go to SEN. This result corresponds to 290 days of operation: 180 days of harvest, and up to 230 with the mill’s own products, and the rest with marabou from nearby areas.

Among the technology to install there is a storage system for biomass, a boiler of 100 tons per hour, a chemical water treatment plant, and an interconnection substation. These investments will allow them to save some 27 449 tonnes of fuel. From these savings, it is estimated that the recovery period is around seven years, although such figures are susceptible to international prices.

More ambitious still is the project in the Ciro Redondo sugar mill (Ciego de Avila), developed by the joint venture comprising Zerus (belonging to the Cuban AZCUBA Group) and Havana British Energy Ltd. Here is expected to reach an annual electricity generation of 320 GW-h, of which 280 GW-h will be delivered to the national grid, in ust 290 days of work.

This requires also a storage system with a boiler capable of processing 200 tons per hour. Since there is a greater power with respect to the Jesus Rabi, this bioelectrical plant will require higher volumes of bagasse and forest biomass. With its operation it will save annually about 84 000 tons of fuel, for a recovery time of six years.

These actions not only seek to exploit the marabou, but to process much more cane and obtain higher energy efficiency from bagasse.

There are experiences like the forest biomass gasification plant in Santiago de Cuba. As the minister said, the system works on a very small scale, but considering the large amount of marabou in the country, this precedent can be extended to virtually all provinces.

Another alternative is to deploy gasification plants in sawmills, such as Macurijes and Pons (Pinar del Rio), which are at different stages of implementation. This would use the waste from the timber industry, a practice that could also be generalized to other sawmills.

The criterion indicates that the subspecies Dichrostachys cinerea reached the island in the mid-nineteenth century, brought for decorative purposes or through seeds digested by cattle imported by all accounts. It is native to Africa, India, southern Thailand and Malaysia, and northern parts of Australia. However, only here it behaves like a pest, as there are diseases that limit development in those places.

Researchers Isidro Méndez and Ada Ramos (1) state: “No other plant has spread spontaneously so much in Cuba during the last 150 years. In many places it has come to displace native vegetation and imposed a population of almost absolute dominance. It is therefore somewhat counterproductive despite its abundance-dominance, not to exploit it on a large scale as a natural resource. “

The deep and extensive roots of Marabou make it very resistant to drought, cutting and burning, to which adds a remarkable capacity for revival. In so holding on to the land, it becomes an important agent against erosion.

It grows in different types of soil, forming dense thickets, which together with thorns and hard stalks significantly hinders control actions. It is considered a quintessential heliophile legume, so that not only supports the sun, rather “loves it”.

It can grow to four or five meters and can be used for fence posts, rustic buildings, poles and joinery items. It is widely used to produce charcoal, which it is even exported. Marabou wood is easily combustible and produces little smoke, so that does not change the flavor of foods during cooking.

This plant, symbol of the downtime and the apathy that populated Cuban agriculture in its worst crisis years, allows also to obtain paper pulp, and its young shoots become food for herbivores.

Scottish scientists concluded that under certain laboratory conditions, the marabou can become activated carbon, which is used to remove impurities in the manufacture of rum and other beverages. This material conducts electricity; it could then be used in battery production.

Far from subscribing to magical formulas in advance, we should ask some questions. To reap it we need machines that cut and convert it into chips. Recently engineers  Enrique Leyva and Rafael Calzadilla finished the Leyca prototype. The team, named by combining the names of its creators, was designed from a harvester KTP-2M, and promises to be the “Marabou’s terror”.

Indeed, the Minister of Energy and Mines indicated the importance of national mechanical industry to make its contributions, to introduce parts and components for renewable energy systems and thus reduce the cost of investment. After several test runs, Leyca has yet to prove its potential in practice.

We have to ask about possible pricing to producers or those who hold the land. It would be great news for the beneficial owners that have granted land under Decree-Law 259 and then the Decree-Law 300, most of whom have had to clear a lot of brush-know that this effort has another value well beyond leaving the soil ready to be cultivated.

It has been said that the land released may be used in food production, to develop forest or implement a crop rotation, so you do not lack forest biomass. Although there was no definitive answer on that, another challenge is to establish the necessary synergies between sugar, agriculture and energy sectors, plus the regulatory framework for such matters.

For now, the intelligent exploitation of the bush can become a source of employment in industry and agriculture, as well as significantly reduce contaminant balance of traditional electricity generation.

Coinciding with Mendez Ramos, “Cubans must ultimately accept that the marabou is already part of our flora, and even a ational culture, and that to get rid of his presence at any cost, even if physically possible result, would be an unfortunate error from the environmental standpoint. Living with the cause of much damage can only be accepted if its benefits are weighted too, so minimizing the maximum negative effects and if sustainable management is achieved “.

Notes
(1) E. Isidro Ada Mendez Ramos. Marabou: pest or natural resource? An energy option in harmony with the environment, in Energy and you, No.27 (July-September), 2004. Available at: http://www.cubasolar.cu/biblioteca/energia/Energia27/HTML/articulo03.htm