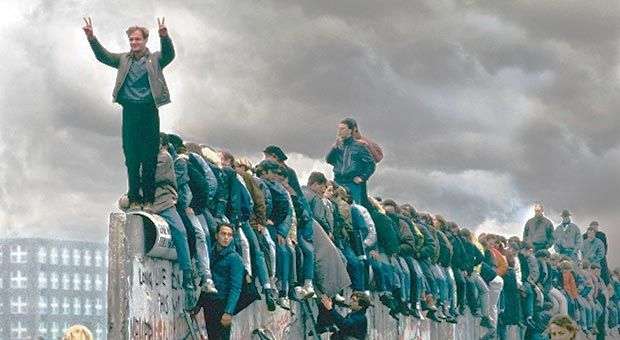 I would guess that he is about 55, maybe 58, but no older…. He needs a few more wrinkles and a few more gaps in his memory to be 60. He tells me that he lived for almost 10 years in Germany, and that he saw the fall of the Berlin Wall with his own eyes.
“I might have been one of the first to pick up a piece of the Wall,” he says proudly; or at least, that’s what his expression seems to reflect.

For a moment I’m startled when he releases his hands from the steering wheel. They are rough, stiff hands, and he rests them for an instant on his thighs, as if he were feeling that piece of wall in his hands again.

“And what were you doing there?”

“I was sent to work in Berlin for almost five years as an instructor; I’m an agricultural engineer…. Then I was assigned to the Cuban embassy and another five years went by before I returned to Cuba.”

“I meant, what were you doing by the Wall?”

“Oh! I was sent from the embassy to attend to the Cubans who lived in Berlin and the rest of the RDA [East Germany] and who were crossing to the other side of the Wall, to the other Germany.”

“The prosperous Germany, the RFA?”

“Yeah, that one…. My mission was to collect the passports of the comrades who deserted; I collected about 650 in a short amount of time. It was a crazy scene. People were crossing desperately, screaming and crying; it had been many years since they’d seen their families. Can you imagine?”

“Yes, I imagine. That reconciliation must have been wonderful….”

We’re on the way to the airport and the whole time I’ve been carefully watching his face. Now I turn my eyes toward the street (Avenida Boyeros) to see how far we have to go. As usual, I’m late, but I’m not worried about missing my flight—I’m more worried about arriving before we can finish our conversation.

“And now you’re a taxi driver?”

“Yes, it was hard to find work when I came back, and this is what fell to me.”

“Sorry about what, being a taxi driver?…”

“No, about not crossing the Wall.”

“Man, are you crazy?! I am a happy man. With all of its problems and defects, this is the best country in the world….”
“Yes, you’re right. We have to make some changes, knock down some walls, but I agree with you….”

Mariel Special Development Zone: a window to the world?