Since the entry into force of the 2019 Constitution, the protection, guarantee and defense of human rights are a state obligation, not just an ethical, political, economic and social horizon. 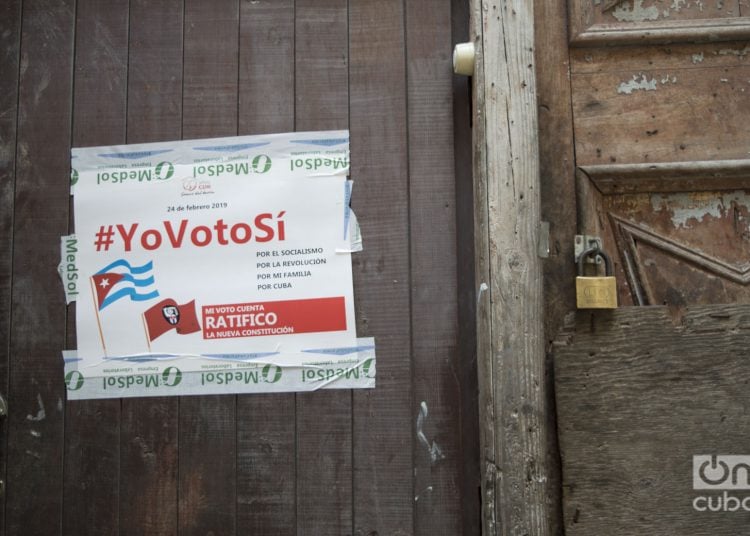 As we have said before, human rights can be a legal and ethical reference both for the functioning of the State and for the behavior of public officials, the projection and implementation of public policies, and especially the relationship between the political system and civil society.

In Cuba, since the entry into force of the 2019 Constitution, the protection, guarantee and defense of human rights are a state obligation, not just an ethical, political, economic and social horizon. In this new Cuban legislative framework there is the figure of legal bonding, which allows citizens to demand all their rights even when the norms of constitutional development are not defined. That is why it is important to know that human rights are already an obligation of the Cuban State.

I insist that the necessary political and cultural dialogue in Cuba must occur under the auspices of human rights. This approach would allow compliance with the Constitution of the Republic, which is the same as achieving socialist legality and democracy, as well as doing justice to the 44 international human rights instruments signed by Cuba.

Let us then analyze article 12 of the Universal Declaration of Human Rights, which has enormous significance in the current political context.

“No one shall be subjected to arbitrary interference with his privacy, family, home or correspondence, nor to attacks upon his honour and reputation. Everyone has the right to the protection of the law against such interference or attacks.”

Since 2019, the Constitution of the Republic of Cuba incorporates these rights as follows:

Art. 48: “All persons have the right to have their personal and family privacy, their own image and voice, their honor and personal identity respected.”1

Art. 49: “The home is inviolable. It is not possible to enter someone else’s dwelling without the permission of the person who inhabits it, except by express order of the competent authority, with the legal formalities and for a reason previously defined in the law.”2

Art. 50. “Correspondence and other forms of communication between people are inviolable. They can only be intercepted or searched by express order of the competent authority, in the cases and with the formalities established by law. The documents or information obtained in violation of this principle do not constitute evidence in any process.”3

All these rights were already contemplated in the Cuban Penal Code, specifically in Chapter II of Title IX “Crimes against individual rights,” entitled “Violation of domicile and illegal search.” The First Section, “Violation of Residence,” contains Art. 287.1, in addition to sections 2 and 3.

“Anyone who, outside of the cases authorized by law, enters another’s home without the express or tacit will of the resident, or remains in it against his or her manifest will, incurs a penalty of deprivation of freedom from three months to one year or a fine of one hundred to three hundred installments or both.”4

Section 2 referring to this crime constitutes an aggravated figure of it, in cases where it is committed at night, in a deserted place or using violence or intimidation; while section 3 explains that the home that serves as a dwelling, as well as all its closed or fenced places, will be considered as “domicile.”

For its part, Chapter III of the same Title, called “Violation and Disclosure of the Secret of Correspondence,” contains in its First Section Article 289.1, in addition to sections 2 and 3.

“Whoever, without being authorized, opens a letter, telegram, dispatch or any correspondence belonging to another, is punished with deprivation of freedom from three months to one year or a fine of one hundred to three hundred installments.”

The Second Section of this Chapter includes the “Revelation of the Secret of Correspondence” in Art. 290, sections 1 and 2, which defines as the author of this crime the person who reveals a known secret within any type of unaddressed correspondence the person who discovers this content. For this crime, penalties of up to one year of deprivation of freedom are foreseen and in case of having been committed by a public official the sanction can contemplate up to two years in prison.

This broad protection of the aforementioned rights, both at the constitutional and criminal levels, should alert individuals and institutions that uncover private conversations that occurred on social networks, which because they have not been previously authorized are secret until proven otherwise.

Crimes against honor in the Cuban Penal Code

Title XII of the Penal Code completes the protection of the human rights enshrined in the Constitution that have occupied us in this analysis. The crimes against honor are: defamation, slander and insult.

The four sections of Article 318 of the Cuban Penal Code specifically regulate the crime of defamation. Number one establishes:

“Anyone who, before third parties, imputes to another a behavior, a fact or a characteristic, contrary to honor…is punished with deprivation of freedom of three months to one year….”6

Section 2 clarifies that there will be no penalty if the accused shows that the allegations made are true, that he had reasons to believe that they were true or that he acted in defense of social interests.

Section 3 prohibits the action of the accused person from being justified if his intention to denigrate the victim of the crime is manifested.

In number 4 of these sections referring to the crime of defamation, the court is directed that, in the event that the accused has not been able to demonstrate the veracity of his accusations or has not retracted them, he must record the fact in the sentence.

If the perpetrator of a crime against honor affirms something he knows to be a lie, in addition to affecting the image of the damaged person—as well as his social and professional recognition— he then commits the crime of slander. Insult is already typified when the sole objective of the offender is to hurt the victim’s feelings.7

Lastly, the honor referred to in Art. 48 of the Constitution of the Republic of Cuba can also be offended when data on people that are not up-to-date or that are false are stored and used in public files or public records.

The Cuban Magna Carta, in its Chapter VI “Guarantees of Rights,” contains Article 97, which:

“recognizes the right of everyone to access their personal data in records, files or other databases and information of a public nature, as well as to interest in its non-disclosure and obtain its due correction, rectification, modification, updating or cancellation.”8

This guarantee, long-awaited in Cuban law, is known in the world of constitutional law as habeas data and now it needs a law that develops its instrumental details.

4 Rivero García, Danilo and Bertot Yero, María Caridad, Criminal Code of the Republic of Cuba, Law 62 of 1987, Annotated with the Provisions of the Governing Council of the Supreme People’s Court, ONBC Editions, Havana, 2013, Page 279.