The southpaw from Holguín stayed with one of the two reliever posts in the first group of the MLB decade. The Cuban surpassed by a vote star Kenley Jansen, closer of the Los Angeles Dodgers. 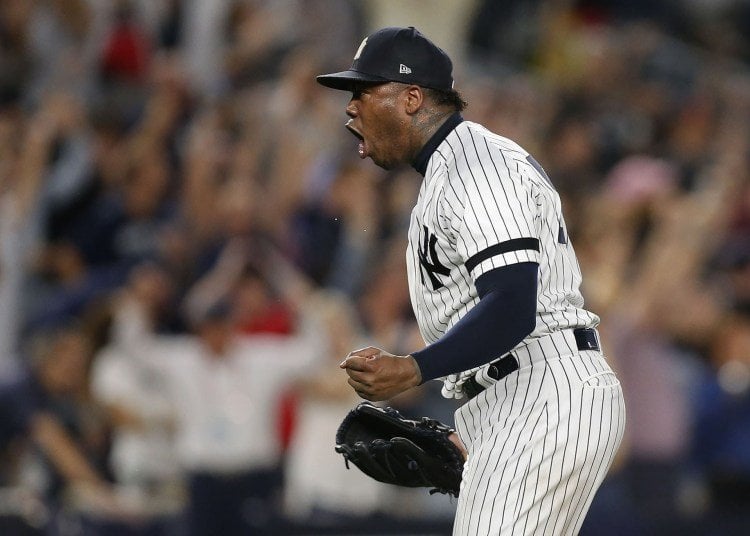 Aroldis Chapman has completed a decade of luxury as a MLB closer: 273 rescues, 883 and six All-Star Games. Photo: Yahoo.

After an entertaining and unexpected survey, MLB announced its two dream teams of the decade that has just ended, based on the vote of 73 specialists who chose the best by positions and formed a pitching staff with five starters and a couple of relievers.

The closer of the New York Yankees, Aroldis Chapman, was the only Cuban selected in the teams, which also include six Dominicans, two Venezuelans and a Puerto Rican.

The Holguin player, Reliever of the Year in 2019, entered the first squad next to the portentous Craig Kimbrel, only one vote ahead of Kenley Jansen, from Curacao, who stayed for the second squad with Wade Davis, another of the very prominent relievers of the decade.

These stars ruled the decade.

The selection of Kimbrel in the first team was a sure thing, considering that the fast right-handed ballplayer finished these last ten years as a leader in rescues (346) and effectiveness (2.08) among all the relievers of the MLB with more than 500 innings.

Kimbrel won the Rookie of the Year award in 2011, played in seven All-Star Games, saved more than 40 games in four different seasons and in 2013 exceeded the 50-rescue barrier.

In all this time he wore the shirts of the Atlanta Braves―in which he debuted―, the San Diego Padres, the Boston Red Sox (he won the 2018 World Series) and the Chicago Cubs.

Chapman, World Series champion in 2016 with the Cubs, is the second of least effectiveness (2.23) among all eligible closers, and third in strikeouts (883) and rescues (273) since debuting in the MLB in 2010.

In these last two sections the Cuban had Jansen (first in relievers with 903 and second in saved with 301) ahead of him, which could tip the balance in favor of the Dodgers’ right-handed ballplayer.

However, voters rewarded Chapman, who pitched six years for a losing team like Cincinnati. He also faced two prolonged periods off the fields in 2014 and 2016, first for a ball pitch to the head during spring training, and then for a 30-game suspension because of incidents of domestic violence.

Another player with Cuban roots was also rewarded by the specialists. We’re talking about third baseman Nolan Arenado, who was enrolled in the second team, behind Dominican Adrian Beltré in the ballot count.

Arenado has won the Golden Glove in each of the seven seasons he has played in the MLB, and has been the top homer in the National League in three different seasons. However, for those who decided, the record of Beltré, who retired in 2018 after reaching the 3,000 hits mark, weighed more.

In addition to Chapman, almost no Cuban could fight for a place in these teams, although some would defend the candidacy of José Abreu in first base. He has been the most consistent batter of the island in recent times, but his numbers hardly compete with those of Miguel Cabrera and Joey Votto, who were selected in the position.

Cabrera now has a spell of bad luck because of several injuries and the unavoidable passage of time, but at the beginning of the decade he was a real scourge for rivals. The Venezuelan twice won the MVP of the American League and won the Triple Crown in 2012, something that nobody had achieved in 45 years.

Votto, meanwhile, won the MVP of the Old Circuit in 2010, and won seven times the OBP title, something that in a decade was only achieved by Roger Hornsby (in the 1920s) and Ted Williams (in the 1940s), both in the Hall of Fame.

From the list of 32 players selected, the role of Latinos, who took ten places, including the entire infield of the main team, is striking.

The Dominican Republic demonstrated its power, with the inclusion of veterans Beltré, Nelson Cruz, José Bautista, David Ortiz and Robinson Canó, as well as the emerging star Francisco Lindor, who if he continues on the rise could also perfectly well be in the dream teams of the next decade.