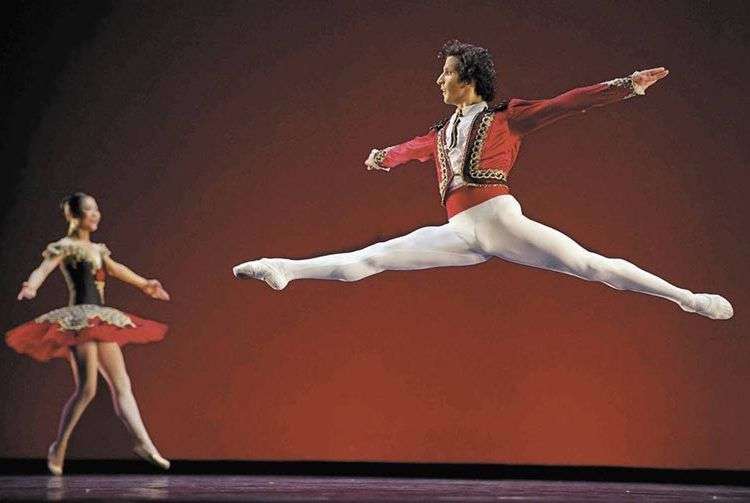 Rodrigo Almarales quit dancing at the latest premiere of the Cincinnati Ballet to perform at the 24th Havana International Ballet Festival. By these days, the American company plays Peter Pan, a new choreographic staging by Septime Webre, director of the Washington Ballet; but the artist chose to fly to his hometown to fulfill the dream of dancing with the National Ballet of Cuba (BNC by its Spanish acronym), company in which his mother was the first soloist.

“When I left Cuba, I was 10 and everything looked great. Now things look smaller and I do not have to raise my head when talking to my family, “he said laughing. For this young man, returning home has been interesting, “an emotional shock”, he repeats several times.

Almarales will dance on October 31 at the program entitled The Magic of Dance, which brings together some classic scenes of relevance and where he will perform the Coppelia pas de deux with Grettel Morejon, BNC prima ballerina. He will also dance with her the Flames of Paris pas de deux, on November 4 and 7 in two concert programs at Mella Theater.

” I’ve never danced entirely the Coppelia pas de deux , I had just made ​​ the male variation as a child, so this will be my debut and I only have four days to learn it,” he revealed excited by the challenge. “I really like the Flames of Paris duet and I’ve danced it a lot, but Coppelia was a surprise proposed to me here,” he said at the end of the rehearsals.

After professional retirement, Almarales´ mother accepted a contract as a teacher in Mexico and took her 10 years old child with her, in 1999. The boy had started studying ballet at the elementary level school in Havana and continued to cultivate his artistic vocation in Mexico for four years, then three more in Canada and one in Germany, where he earned his first professional contract.

Rodrigo worked in Italy before settling in the Cincinnati, company where he has been able to dance Swan Lake, Nutcracker, Giselle and other pieces conceived in classical style but recently-made such as King Arthur , Cinderella and Alice in Wonderland.

Although he has participated in pieces by Jiri Kylian and William Forshyte, he would like to dance more choreography works of these authors and also by Christopher Wheeldon and Nacho Duato, whose work he admires but still has not had the privilege to enjoy it as a performer.

Regarding Cuba, he has the dream of dance Don Quixote entirely with the national company.

“If I had to choose a classic, I would choose that one because it is one of my favorite ballets. From all its versions, I confess that my favorite is the one by Russian Mikhail Baryshnikov because it has some spectacular variations, but I will do any version for dancing with the BNC. Actually, my greatest desire is to come to Havana to perform Don Quixote with this wonderful company, “the Cincinnati Ballet soloist said while awaiting the arrival of her relatives.

Now we just have to wait for the public’s approval, that audience which as he acknowledges “is famous” by knowledge, Latin jubilation and honesty.