The Cuban mountaineer, as many already call Yandy Núñez, has been climbing important peaks in recent years that have served as preparation for the future climb to Everest. 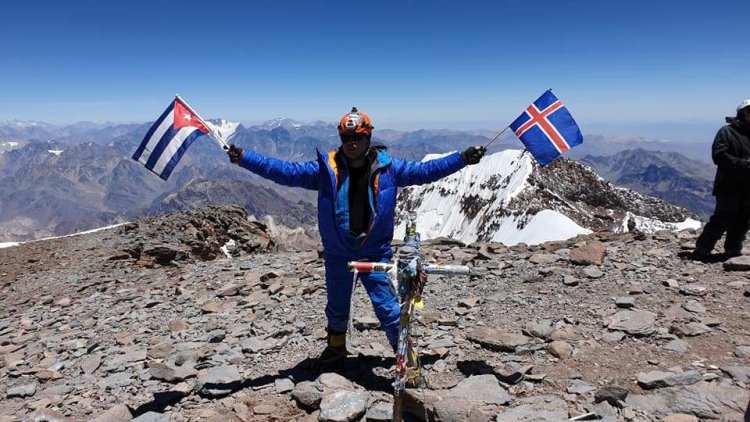 Cuban mountaineer Yandy Núñez Martínez conquered his dream of reaching the top of Aconcagua, the highest mountain in the Americas, and is now preparing to reach the top of the world: Mount Everest, in the Himalayas.

“I collapsed when I got to the top and there every step counted. I remember that when I was at the summit I still counted 3 or 4 steps and breathed to control myself,” Nuñez told OnCuba.

Located in the province of Mendoza, in western Argentina, Aconcagua is 6,962 meters high, the highest conquered so far by the Cuban. To achieve his purpose, he had to overcome different obstacles that required that he use his energy reserves.

“The most demanding part of the mountain is when the path of the ‘Cueva’ begins, where everything becomes a pure slope and energies are already at a minimum and about to run out. When I am in the part that is known as ‘La Canaleta’ I already start seeing the top, but there’s still a lot to go to reach the summit. At that point all my physical strength had run out, I was already completely exhausted and then I began to work on my mental strength. Everything is pure mental decision,” he says.

Failing to climb to the top was never an option for the Cuban.

“Always in my heart I knew it would happen. Otherwise I would be betraying my child and he would never have forgiven me,” explained Núñez, who dedicated his triumph to his two-year-old son.

Núñez, who lives in Iceland, knows that a very complex test awaits him when he decides to undertake the climb to Everest. To do this, he plans to comply with a strict training discipline in order to withstand the harsh weather rigors and physical exertion.

“Now I will train more hours in the mountains. I will look for one with conditions more or less similar to the cold of the temperatures and winds I can find on Everest,” he explains and reveals that he will impose on the social networks the hashtag #Everest2020 to try to obtain resources to help him make his dream come true.

The Cuban mountaineer, as many already call Yandy Núñez, has been climbing important peaks in recent years that have served as preparation for the future ascent to Everest. Before conquering Aconcagua, he made spectacular climbs to Mount Elbrus (5,642 meters) and Pico de Orizaba (5,636), the highest mountains in Europe and Mexico, respectively.

“Everything has been part of my preparation to reach my goal. I will not give up until I put the Cuban flag on the highest peak in the world,” the mountaineer assured OnCuba.