Cuban activists, who have been very active in recent times demanding the approval of an animal protection law, walked to the site where the dog had been buried days before, in the area of ​​La Hata, in Guanabacoa. 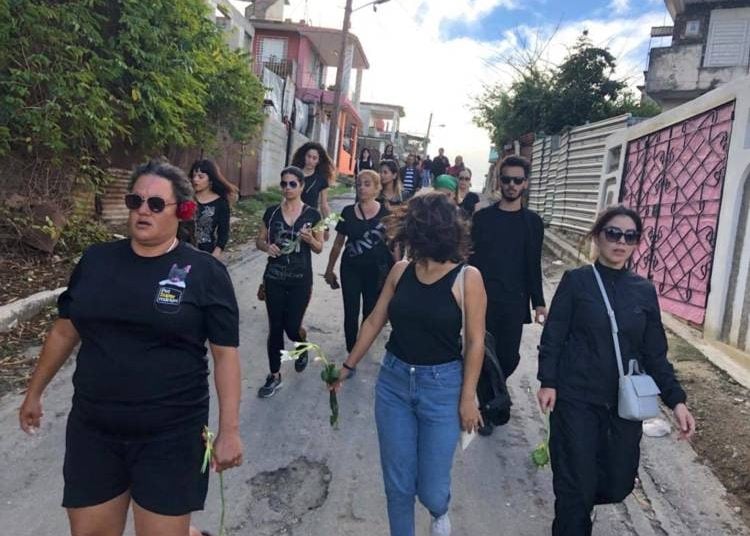 A group of Cuban activists for animal rights staged a silent march this Wednesday protesting the violent death of a dog in the Havana municipality of Guanabacoa.

“We were not many, but enough to prove that animals matter, that the brutally murdered dog was not a dirty rag thrown away because it is no longer useful,” activist Valia Rodríguez wrote, in a post published in the Facebook group “Cuba contra el maltrato animal” (Cuba against animal abuse).

Cuban animal lovers, who have been very active in recent times demanding the approval of an animal protection law, walked to the site where the dog had been buried days before, in the area of ​​La Hata, in Guanabacoa.

We were not many, but enough to prove that animals matter, that the brutally murdered dog was not….

The animal had been chained, dragged by a tractor and beaten by a man after he discovered it, according to him, attacking his chickens. The extreme cruelty of the punishment, which would cost the dog’s life, outraged the community of animal lovers that reacted strongly on social networks and convened the protest march this Wednesday.

The Cuban activists blamed the Cuban authorities and their delay in enacting legislation that criminalizes events of this nature for what happened.

“Everything happened because there was no law, and it will not have consequences because there is no law. That is why we do not accept that the #LeyDeProteccionAnimalEnCuba [Animal Protection Law in Cuba] is delayed,” the group Cubans in Defense of Animals (CEDA) published on Facebook, which said that “the fault is the inertia of the #MINAGRI (Ministry of Agriculture), of the @asambleanacional and #EstadoCubano.”

“No more days without a law, we need justice! We don’t want for the right thing to be violent and murderous,” CEDA said.

It lived to suffer: it was dragged by a tractor, then beaten, leaving it almost lifeless. That’s how it died….

Meanwhile, when reviewing what happened this Wednesday, activist Violeta Rodríguez, daughter of singer-songwriter Silvio Rodríguez, said that by paying “tribute to the murdered puppy” in La Hata “we are making another call to social awareness and the need in our country of an Animal Protection Law.”

Meanwhile, Valia Rodríguez pointed out that “animals have behind them a growing movement of sensitive people in Cuba today who no longer want or accept that abuse remain unpunished” and said that “this silent march was also a declaration” to demand the law.

“No more postpositions. FACTS, not words,” she wrote in a publication in which she tagged President Miguel Díaz-Canel, the newly appointed Prime Minister Manuel Marrero and Minister of Agriculture Gustavo Rodríguez.

Given the growing demand of animal lovers, the Cuban government has assured that it is working on a legislative draft that proposes the criminalization of abuse, establishes a control and identification of pets and regulates their commercialization, which is in the “review stage.”

Meanwhile, in his recent address to the National Assembly, Díaz-Canel called on Parliament to prepare to legislate, “because of its high sensitivity,” on a group of issues that include animal abuse.

In recent months, in addition to their activity on social networks, Cuban activists have gained visibility with a group of public actions against animal abuse, including a protest at one of the sites of the entity known as Zoonosis, meetings with executives of state institutions linked to the issue, and a large march through the streets of Havana, authorized by the government.

In addition to the most visible situation, that of stray dogs and cats, animal advocates have also drawn attention to the need to protect horses used for transportation and agriculture, cocks and dogs involved in fights and even zoo animals.

The movements that work to raise awareness about the rights of all animals―among which are Aniplan, CEDA and PAC―organize free adoptions, vaccination and sterilization campaigns, and also report cases of abuse.