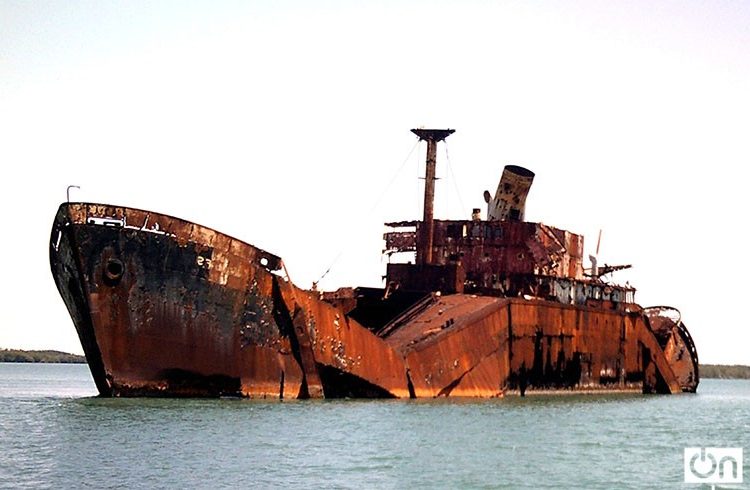 Sagua la Grande Bay harbors more sunken than floating ships. When I finished putting together a list of the vessels that had disappeared in this area in over 150 years, a friend noted: “It’s like another Bermuda Triangle!”

It could be. The harbor is plagued with rocks and sand banks. Its main entrance is called the “Mouth of Wonders” – probably in reference to the wonderful feeling of finally reaching the shore after crossing the Sargasso Sea, or the scary Atlantic Ocean in times of Christopher Columbus, the wonders of success, of knowing they – the sailors – had reached their goal.

The Nikolis showed up on a stormy afternoon. The crew requested permission to enter the harbor, but the authorities replied that they could not help them. Then the ship forcefully entered the bay anyways.

The ship had come from Europe, where it was supposed to go back loaded with sugar. It is said that its abandonment was part of a plan that the Greeks crafted to charge the insurance. It was abandoned after a few months.

The merchant ship had a nice structure; it had been commissioned by the British during the Second World War, and built in a shipyard in the United States.

It was originally named “Rusell Sage,” after the American banker. It was a “Liberty ship,” one of many built in a rush to replace the ones sunken by the enemy German submarines.

They were expected to last some 5 years, but the Nikolis sailed for over two decades, from 1944 to 1967.

It traveled the world under the flag of different countries, and by the time it came to die in Cuba it bered a Greek name: Nikolis.