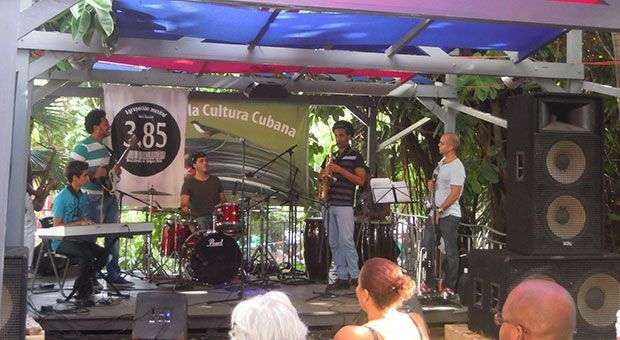 Recently graduated from the National School of Art in 2013, a group of young people have chosen the unlikely path of jazz in Cuba, to develop their musical career.

3.85, the group’s name, made its first album, Seeking the impossible, in February 2013 under the guidance of arranger Germán Velazco , which turned out to be an excellent introduction letter, impossible to ignore because of its multiplicity of sounds and great making .

With an unusual name, but yes, with various readings, they begin their walk and finding their own space in Cuban music. “Almost everyone asks why 3.85. Some associate it with the cheapest price of Havana Club, and could be, but actually the name arises because there are 385 kilometers from Havana to Sancti Spiritus, my hometown and because it is a combination of the months of birth some of the founders of the group, ” its director Juan Armando Diaz says, sitting in the backyard after completing the rehearsal.

Now, after auditioning before a jury made up of Julito Padrón, Yissi, William Roblejo and led by Jorge Reyes, these novice jazz players are waiting for documents to be issued by the National Music Center, which will credit them as a professional group.

“We are waiting with great expectation. It is the only requirement we need today to begin work. We already had some experience in jazz emblematic sites in Havana as the Jazz Café and la Zorra y el Cuervo bar, where we have open doors to perform, “Juan Armando explains.

Why choosing jazz in Cuba?

The tradition of this genre on the island is strong. Background as Bebo, Chucho, Irakere, Robertico Fonseca and many others, puts the bar high for those who decide to embark on this adventure. Thus, for these guys music becomes a challenge, so why not challenge it?

“In our case we prefer the possibilities of jazz interpretation and improvisation that it offers. Perhaps no other music allows such freedom to interpreters. Although 3.85 doesn’t intend to become an elite group or anything like that. We want to make a more commercial style of jazz, one that is affordable to most of the public without compromising the essence of the genre, “he says.

“We can make music for musicians, and really enjoyed it. But that kind of performances, full of harmonic complexities that are often more for the enjoyment of the interpreter, are not for all areas or for all audiences. “

Without getting distance from patterns of jazz and musical vision, 3.85 has its own view of what may be the genre in Cuba. Mixed with Afro-Cuban and foreign rhythms, with lyrics in Spanish and high quality arrangements, the proposal of this group is a very attractive. They are heir of the purest Latin Jazz.

Currently the group is made of by vocalist Sheila Gretel Cabriales, whose melodious and fine voice compensates during her interpretations the force of the arrangements; Hansel Woo on trombone, Alexander Carbonell on piano, Mario Gabriel Mesa on percussionwho prints a hallmark to the proposal by 3.85; Rafael Aldama on bass and Juan Armando, who shakes the earth under his feet when he hits the battery.

Despite the youth of its members, they are not lacking awards. Rafael was awarded as a soloist in the past JoJazz while Mario Gabriel and Hansel were recognized as a group.

These guys not only versioned major themes of jazz, but five of the six songs presented in their first album are written by them, four by Juan Armando and other by Alejandro who carry most in terms of arrangements and lyrics.

“In Seeking … we are lucky that the teacher Velazco accompany us on the version of Chameleon and then perform one grand solo there, but we also really like the ballad Trying, by a saxophonist and orchestra.”

“We are ready to work today”, Juan Armando assures me in the yard while the rest of the group finishes disassembling instruments. “We are constantly testing because at any moment and give us permission and that cannot take us by surprise.”

Lately they have been invited to some areas, but expect to get from them the complete documentation can be established in one place. “For now the closest is the last Thursday of January, at La Pergola, back in Cuba Pavilion, a space in which we have participated and that seems great, although it is not usual to jazz”.

Listening to them is a pleasure. A real pleasure for those who love the mix of virtuosity, strength and pace jazz has

Eduardo del Llano: “I tell the stories I want, the ones that I like and captivate me”

New regulations authorize the expansion of distribution of land in usufruct