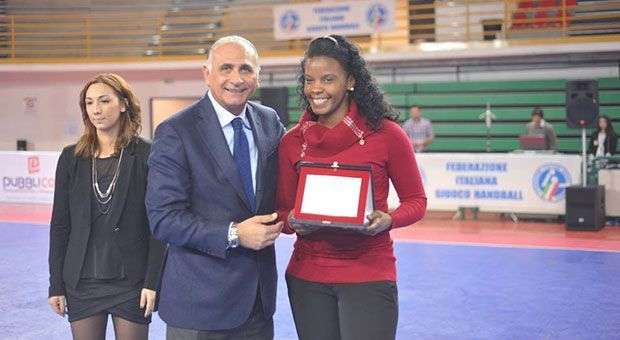 When she was just seven, Arasay Duran scored her first goal on a handball court in Santiago de Cuba, her hometown. The attraction for the sport quickly arouse on her. Then the medals in National School Games and youth tournaments began coming. Later, she coincided in the national team with a generation of hungry-for-victory girls. From her position of left backcourt, goals continued being inseparable part of her daily work.

It was a generation that put all their effort in moving up to the universal handball elite. The memory of the tough training sessions, along with unselfish coaches and federative men , proves it. International matches were scarce, contrary to the difficulties of everyday life. Arasay decided to try her luck as a professional player in regional Mecca of the sport: Europe.

The start was not encouraging. She was hired by a Spanish club where incredibly she never had the chance to play. Then another contract in Iberian lands came that was terminated from financial difficulties presented by the franchise. She moved to Italy and with this transfer destination began to smile at her…

The conquest of an individual prize in the Italian Serie A1 became occasion to speak with Arasay. Goals, yearnings and future projects converge in this talk.

Your performance in 2013, playing for the team Amatori Handball Conversano, was spectacular. How do you assess that?

Undoubtedly, this was a great season for me. I finished as the circuit leading scorer and was voted the best foreign player of the year. It was a very pleasant experience, because since I left Cuba I was yearning to achieve a performance like this one. As it further reflected in individual awards, the enjoyment is greater. All Cuban athletes playing in foreign leagues dream of achieving remarkable performances; that is why we always go out to give the maximum of us.

Tell us about the team where you play, the Conversano.

This year we are on top of the league. Only a foreign player per club is allowed, so I’m the only non-Italian in Conversano. In total we are 20 players and our best player is Giusy Ganga, who was a member of the Italian national team and was selected best player of the Serie A1 in 2013. It also highlights the goalkeeper Martina Giona that two years ago won the championship with the club Teramo.

Right now we are in first place in the league that involves eight teams playing a robin in two rounds, with home and away matches. The top four in the standings go to the playoffs to the best of three games. The winners also discuss the through the same way. The winning club participates in European tournaments. This season will be the Salerno, last monarch of the Serie A1.

Are there more Cuban handball players in Italy or in other professional leagues?

Damaris Bencomo was active here in Italy with the club Teramo, but it is been two years he does not play. As far as I know, only I and Suleiky Gomez, who plays in Brazil, are currently performing in professional clubs.

You belong to a generation that did well at regional level with the Cuban national team. I remember that besides you, Suleiky, Lisandra Luson, Nadezza Valera, Yohania Martí, among other athletes, were a team with great prospects.

You’re right. We were Central American monarchs in Cartagena de Indias 2006. Next year we were siver medalists in Rio de Janeiro Pan American Games. We also participated in pre-Olympics in Leipzig, Germany, which granted a berth for 2008 Beijing Olympics. There I ended up as top scorer, but we did not get the ticket. We were a very strong team with a lot of talent, but we barely played games at the highest level .

I believe there was a time in which that team was lack of motivation, from the difficult training conditions and very few international matches…

Honestly, maintaining motivation was really difficult for us due to the difficulties in training. Despite this, our coaches and federation leaders bent over backwards to improve those handicaps and we trained hard, and when playing we gave it all on the court. The poor participation in international events and ignorance that we had on universal elite were issues that affected us too much.

Did you feel distanced from the main European teams?

I confess it a priori. Our ignorance made ​​us think that the distance that separated us from the elite in Europe was enormous. That preconceived idea changed on the occasions we managed to face any of those teams. We realized that what we needed was to play at the highest level because we already had the talent, physical conditioning and skills.

When was your professional debut?

I started playing professionally in 2012 with the Spanish club Kukullaga. That same year, the franchise had economic problems to face the following season and so I was transferred to Italy .

Were not you hired in 2010 by another Spanish club: León Handball Club?

Yes, but I never got the opportunity to play with that club. In Kukullaga I did it for a short time, so in Spain I had no chance to show all my skills on the court.

Cuba is the country where I was born; I miss it a lot daily. The same happens with my family, friends and neighbors and I know that feeling is mutual. When playing with the national team I also spent time away from them, but the chances of being aware of each other were bigger. Now it’s different and from this distance I really miss a lot that people I love and that piece of land that I consider inseparable part of me.

Let’s dream a little … If Cuban sports authorities finally decided to talk, based on respect and council of Federation and individual interests, with the athletes currently playing in professional leagues around the world. Would Arasay Duran accept to play again for the national team ?

If that possibility is given from the new changes that have been implemented in Cuban sports policy, I would accept immediately.

Would it be possible to make up a competitive team and with chances to qualify for the Olympics in Rio 2016?

I’m sure of that. If my generation gathers together again into the national team, we would work together to get to Rio. We already demonstrated, in competitions in which we participated, that we had to be taken into count beyond the hardships we above talked. Now, with greater maturity and experience on the court, we could become reality the Olympic dream.

Melesio's Grill, a hearty temple to the National Mammal