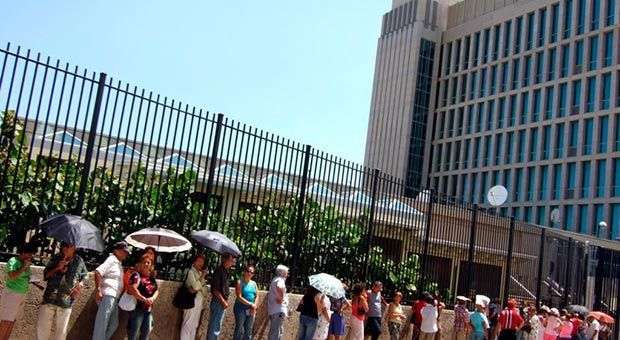 Just when a new cold front hits Havana, the news of the suspension of consular services at the Cuba Interests Section in the United States has come.

It’s Thanksgiving Day. It is a holiday for Americans. The area surrounding the US Interests Section is empty. Only a few of which offer the service of filling out forms are on the sidewalks. “To us it does not affect us at all this situation. The problem is there, with whom want to come. I imagine the dilemma of families who thought of meeting soon, “one of the ladies that offered to fill the forms tells me.

A 70 year old woman who asked to remain anonymous has come to find out if they had actually canceled the consular services between the U.S. and Cuba. “I came to see if indeed they had closed the office. I’m hoping to go and see my son and I worry about not being able to do it. “

The few people in the surrounding areas avoid talking about it and just say they knew what was going on through Granma newspaper.

Irene, an America that works in Cuba in academic exchange programs with USA, is upset with the matter. It does not affect her personally, but professionally is a problem. “We do not know what will happen to our plans for the future. We plan for a group of students to come for the spring semester and could lose a lot of work, preparation and money. I hope this is resolved soon; it is something has never happened. I guess they would have to find another bank but what can they do? Put pressure on a banker or one will show up with sufficient consciousness to take on the Cuban account. It is something that I am very concerned about now. “

Academic exchanges and permissions to Americans to travel to Cuba had increased in recent times. The people to people modality has facilitated more and more Americans to know firsthand the reality of Cuba and for Cubans in turn to share some of their geographic neighbors. The situation takes another nuance in a time when many expected and predicted a strain.

“Once again the Cuban family is affected!” Conner Gory, American journalist living in Cuba for nearly 12 years says. “These are obstacles that directly affect the people. What will they do now that they were all in the midst of paperwork to travel to Cuba? They become victims of a policy to an abstract and absurd level. It’s as if they could no longer have control of their life. What bothers me is that some of the taxes that I pay pay the policy. “

Aleida Garcia lives in Guanabacoa and has three of her sons in Miami. “One of them thought of coming this Christmas but delayed his trip hoping to have more money, now I do not think I’ll see him this year. He’s been three years away and has not come. “

The fact is that they can no longer give new visas for traveling to Cuba and many are victims of this situation.

It doesn’t stop raining in Havana