suarez
in Technologies of Communication and Media
0 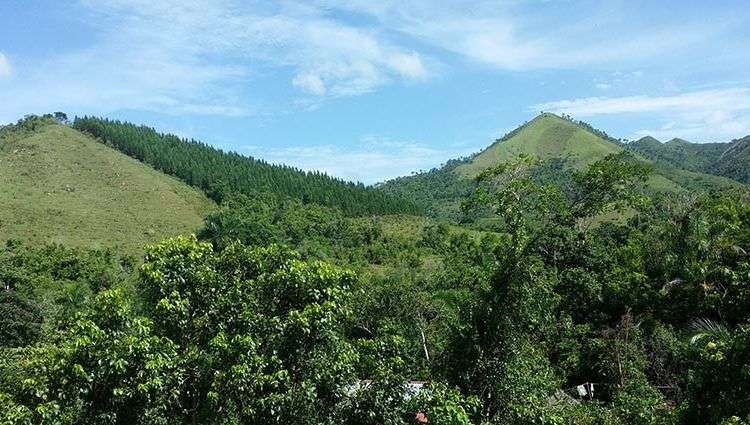 From the National Highway you can distinguish the Guaniguanico Mountain Range. From the distance you can see that blue-green silhouette, and wonders what lies beyond the wall. A strange land where fairy tales are sometimes reality and peasant lives his daily life as in a foreign country…

The journey to those mountains can begin in the shadow of San Cristobal Bridge. The hours pass, get diluted among the cries and the hooves of horses going towards the town. People from there, accustomed to non-schedules, wait for transportation. That is their bitter daily bread.

-The truck passing around ten o’clock is broken; so it doesn’t come today, a girl says as if repeating a verse learned long ago.

At quarter past eleven the crowd starts moving. Dozens of women and men put on their shoulders bags, children, suitcases. A resounding ancient truck stops under the bridge. The assault was swift.

Twenty minutes later that private truck starts, crowded, up the steep road. For ten CUP causes cramps in the extremities, puts many lives on the brink of the cliffs, and undergoes the body a nauseating sauna.

Anyone who has been lucky to reach a window is abstracted and put his eye out to the green landscape; the majestic hills crowned by bare rock; the daring houses that have been uploaded to the mountains top. The air becomes clearer; the deep forest gives us its sounds. Back there, between mountain and mountain, we may see the image of the plain lit by the sun and skin increasingly appreciates the freshness of the palm trees.

La Olla is first, then other small towns up to Quiñones. Our road trip ends there. We await the next transport in front of the clinic of the village. It must be small and agile to get out of the sometimes narrow and always steep embankment ahead us.

The noise betrays it from afar: a motorcycle with a wagon takes a curve fast to reach us. Ten pesos. In just over one square meter seven people get huddled with our respective packages. And the journey begins jumping, tremendous leaps that remind you that you have bones.

-It would be convenient this stretch to be paved, right? One of my friends a sks to the hyperkinetic driver.

-No way boy! If p aved cars can access the Keys, and my business gets fucked.

The man replied without looking back , always looking forward.

-I have transported up to ten people in this ¨riquimbili¨, he tells us proudly.

-And how late do you work?, another friend investigates.

-I live in the village, in the Keys, and I work whenever someone needs or calls me home. He takes air and continues: Even on Saturdays when there is party or disco in Quiñones I work until two o’clock to bring the boys back.

At some point the rider asks the three men to go down the trailer. The next stretch of road is too steep at the beginning and very inclined towards the end. The less weight the less chance of an accident. Grateful first by stretching our legs, we finished shouting for that demonic tricycle to stop the march. We ran twenty minutes, and mountains swallowed our cries.

Half an hour drive until the engine stops. Without knowing there is a no return point. The fiber optic and cellular coverage gets until the Keys. Tuesday and Friday a truck runs the nine or ten kilometers of rock and mud separating it from Machuca, the nearest human settlement.

A mighty river accompanies us part of the way. Then it leaves us alone as we get into the hard forest . The feet sink to the ankles and encouragement sometimes wants to go with them.

Houses at that site are becoming less and more distant. Trees close all, heaven and our bodies. Mangos, grapefruit and limes are born without permission. The Jews reveal us, the Cartacubas follow us, Tocororo is hidden from the snooping cameras.

The road becomes thresher. The thresher gets twinned with the river. And we are going to roll up our shirts and the rags we are wearing as pants. A swollen river is something serious. It seems that it rains a lot where we go. We sharpen our view; we know that in the distance the clouds conspire against the sun. We must hurry.

We crossed the muddy riverbed one behind the other, as in infant line s.

-This is very pretty when it is quiet. The water is clear, very clear , our guide says. The family of my friend lived here for years, until they moved to Havana. Only occasional ex- neighbors remain around here.

Generational ties are amazing in these places. As a neighbor is perhaps the only person in kilometers, the links are strengthened as a kind of tribal rule. Amen to that my friend’s family immigrated to the big city two decades ago, and she left the hills being a baby, she trusts that her grandmother’s nickname to open us some hut to spend the night.

Quimbo remembers Nena as if the woman had never left the hills. He can not believe the granddaughter of Nena has grown so much. And his mouth doesn’t say it, but his eyes of peasant passing from my friend to us, the four intruders who need to stay overnight at his house because a wolf’s mouth is swallowing the afternoon.

Quimbo is discreet, speaks little. Like most men of the hill he has little time to say something. He gets off the horse, cleans his huge hands in his military pants and tells my friend we may rest over there. He makes a shy smile behind his thick mustache.

“Over there” means a house of wood and metal tiles placed behind us. The 2 meters high man walks away ringing spurs, I imagine he is crushing his hat with his monstrous fingers. He crosses very fast a pineapple plantation. That is Quimbo and his wife’s means of support. Up there the fruit is worth two pesos while in Havana is about ten to 15 pesos. It is truly a queen: the wide crown, fleshy body, juicy inside. Biting it is a pleasure.

As in those places pineapple is the daily bread, slices and juice of it are imposed as breakfast. A luxury we enjoy a lot, and that is incomprehensible to our host.

The lady of the house is absent these days. Quimbo tells us then, laid back on the stool, when the sun has almost gone down, that Cuca went to San Cristóbal to find soaps, medicines and some clothing. As we have seen, the stretch is exhausting, so Cuca stays a couple of days in the village, at her family house.

The trees engulf the weak sunlight. The guinea fowls return to vegetation, satisfied after stealing the breadcrumbs and corn leftovers that Quimbo throws to the ground to chickens. In the evening we will hear their complaints. They say that have the same couple for life.

After the afternoon dies there is nothing left but to eat, and telling stories. Asks begin. Quimbo, gentle, hears us and speaks only when necessary. Where is the nearest town? Machuca is one or two hours away. It is strange to my H avana custom by cataloging everything. Nothing has been named between Machuca and the Keys. Maybe so, an office at hundreds of miles; but for Quimbo and the peasants around there the hill s, the river that fragments the mountains, a valley we passed, everything is unnamed as the beginning of time.

Mosquitoes do not dare to get as high; Quimbo ensures that we will sleep like children. Without electricity and battery in our cells, the night in the Mountain Range is truly the night of our ancestors.