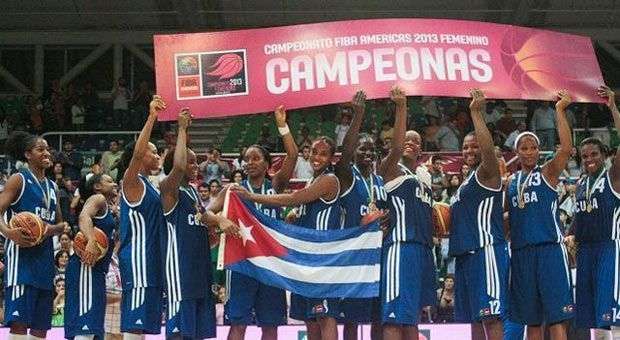 Dramatically the Cuban basketball girls are the brand new American champions. Last night, they took revenge for the defeat in the group stage against the Canadians, and won the important game by the score 79-71. Already in semis they had been the big surprise of the event, to leave out of the discussion of title, the favorite Brazilian team, ensuring their presence in the world championship to be held in Turkey next year. Their victories were at the Gimnasio USBI, in Xalapa, Mexico.

Let’s review then the final game, which had the pleasant attraction of being broadcast live on television here on the island. The first ten minutes were an alternate domain on the board, although at the end of the first quarter the Cuban managed to have a five-point lead, 20-15. The second quarter was one of the best played by the girls in the tournament. They took pains on defense, dominated the rebounds on both ends of the floor, and guided by the exquisite driving by Oyanaisis Gelis, they developed an offensive approach that destroyed the Canadian guarding. So they went into halftime with a lead of fifteen points, 45-30, and thereby exceeded the points scored in the match of the group stage that they lost 40-53.

Apparently third sets against Canada are not very good for the Cubans. A terrible start, marked by a too relaxed defense, something anarchic offensive work in design and guarding destabilized by the rivals, allowed the Canadians to take the pace of the game. Sure, the girls were in their day, and in those few minutes of lack of concentration, the Canadians were not entirely successful either. At the end of the quarter, ours managed to rearrange their game and ended up giving only four points of the lead they had.

And so began the final ten minutes ahead by 11 points 58-47. The Canadians, of course, tried to step on the gas and almost got it, getting at only four points of difference, 66-62. An offensive rebound, turned into two-point basket by Clenia Noblet, the Canadian rally stopped short and from that moment the Cuban victory will not be in danger again. At the final whistle they were 79-71, and that was the time to celebrate.

In the individual part, Gelis Oyanaisis played 35 minutes at the greatest level: 19 points, 6 rebounds and as many assists, plus a block and two steal. Others that had a great game were Clenia Noblet and Leidis Oquendo with 16 and 13 points respectively. The work on the boards  by  Marlen Cepeda was great with 12 balls won under the floorboards, in fact, this time the Cuban team did not believe in centimeters and knew how to make even that fight on land of giants.

Special mention for Yamara Amargo, after failing to play the match against Brazil due to injury, this time she was present in the court, adding eleven points for the win. That performance was the final touch to her election as most valuable player of the tournament, as well as being the ideal team escort. She, of course, becomes a serious candidate for the best athlete of the year in team sports on the island.

Cuban sports fans were eager for a performance like this and the girls gave us this great surprise. Now, on their way to Turkey, they need to design a training as complete as possible. Maybe, after the new changes approved, the next season of professional basketball find several of these athletes playing at that level, which would be a great possibility. At least, they deserve it.