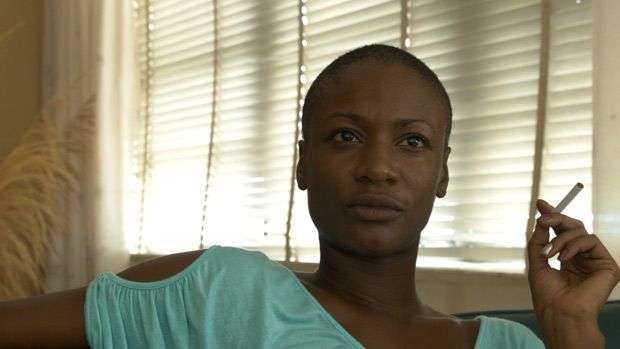 I have to confess that when I took the last monologue I wrote for ¨Antigonon, un Contingente Épico¨ to the rehearsals of that play and Linnett Hernández read it while still stood on the stage, I was stunned. I’ve never seen an actress defending, with such truth, a text of mine so fast. I had previously shared with her rum, Spanish limes, the suicide sight of her apartment and I was aware of the strength and great energy she had as human being and as actress, but when she put the bush woman heels on and pronounced that text, I knew she would leave a huge mark on me and on everyone who would listen to her.

Linnett is a black woman with lots of luck and too much work. She lives between Paris and Havana and now is in a magnificent moment of her career. So I wanted to share with her, because Linnett loves sharing. She says “Good night” in a very special tone as if saying “I swept”, “May I?”, “Pardon me”, “I love you”. And suddenly Linnett introduces herself to me:

I studied gymnastics but in high school, a teacher, Barbara, took me to the theater to see ¨Parece Nieve¨ [1], and I told myself I want to get on there. I applied to ENA (Spanish acronym for Cuban National School of Arts) but I failed. Then I entered to ISA (Spanish acronym for Cuban Higher Institute of Arts) and got graduated with Carlos Celdran.

While in the ISA I attended a casting and was selected for ¨Kangamba¨, a film by Rogelio Paris. Then I worked in ¨Del amor y otros demonios¨[2] in Colombia and ¨El hombre de cabecera o percusiones¨[3] in France . Recently I made a little scene in ¨Ana´s film¨ [4] and I perform the virgin of Fatima in ¨ Fatima o el parque de la fraternidad¨, the latest film by Jorge Perugorría.

In the theater I made ¨Sueño de una noche de verano¨ [5] in the United States and ¨Doña Flor y sus dos maridos¨ [6] in Colombia. I’ve been between Paris, Colombia and Cuba. And I reside in Paris because I married a Frenchman, but I am a Cuban citizen and I have my house here and I get my rationing here .

How do you appear in the process of Antigonon, un Contingente Epico?

Carlos Diaz [7] told me he wanted me on the show with a monologue inspired by Mariana Grajales and women of the bush. He said I would appear naked and I answered it was okay. And when I went to the rehearsals and I saw the work I did not know where I fit. Everything was well staged. When you took the monologue to the rehearsal, I realized it was a closure of everything that was being said about the bush, the Homeland, but also about the time that we are experiencing now. All is very acid, said to the face, but different from the other texts of the play. I did not want to look at you that day, I felt it was very strong.

What did you do to work that monologue?

I need to integrate the text to me. I have to look for a relationship and I always find it in music or painting. I went to the Fine Arts Museum and searched for images, body positions and colors to help me and I associated them to the text. I drew it in parts and I created different pictures, stories. I put it a bit of my character, which is very strong. I have a lot to say and try to take everything out through that text.

How has it been the relationship with Carlos Diaz?

I’m really scared because after graduated I have not made theater in Cuba and I know there are many people who want to see me. Everyone thinks I left Cuba , or that I no longer work here and that’s why it is important for me to work in Antigonon…

Carlos is very rare. He has much inside of him and goes cooking it. He knows what he wants to get out from you and makes you to find it. He has the intuition of calling you at the exact moment in which you are ready and he found that time for me.

What do you think of the characters for black actresses in Cuba ?

Very few screenplays are written for black people. It is different in the theater because although the text is not for a black character, the director may incorporate it to the staging and that changes the perspective. But it is fatal in cinema. They always write about prostitutes, low-level women or slaves. I can not mention one black actress in recent years who has performed a good character. So I think it’s great that Fabián Suárez [8] to have thought his protagonist as a black woman and has given to her so much power, another vision.

Tell me about your character in ¨Caballos¨ (Horses), the debut of Fabian Suarez

Galaxia is a singer and, like me, is married to a Frenchman and lives in Paris. But in Havana she meets a young photographer who takes her to a penthouse and this changes her. She is a woman floating. She is aware of everything that happens around her and nothing surprises her. It seems she is not from this time. ¨Horses¨ is going to be tough; it talks of a new generation that is gradually occupying a place in history. It has a very different tempo to the one used in Cuban cinema. Today everything runs, no one listens, people bark. And it is also about listening, about taking time for communication, for life.

¨Horses¨ is independent from ICAIC (Spanish acronym for Cuban Film Institute), how do you see the path of independent filmmaking in Cuba?

I think ICAIC´s work has slightly expired. Since I left Cuba to make ¨Del amor y otros demonios¨, I noticed the dirty environment. The producers told me, you went out because of me, and asked me for money. I do not belong to ICAIC already. Many of its directors are not artists and there are new directors who have another language. And ICAIC does not understand that or defends it. So, my hope is in independent cinema. It is taking the first steps, but it depends on the creators not to reproduce the same clichés. People need to hear the truth, but well said.

Why did you return to Havana to act?

I am 30 and still feel that I have much to do. I have had great success in Colombia or Paris but performing here has other flavor. You know you will work for your audience. This is your real public because it is the root from where you come. They are the ones who truly understand you . There are many actors who have left Cuba and are now coming back because they want to work here, because they have realized on the importance of dialoguing with that public. And that seems very encouraging to me.

What do you have to say now to your Cuban audience?

They must not go out, or run away. And if they do it, they must return for this not to get empty , and we must continue building on this country as we can.

What is your dream?

I want to have a five-bedroom house with a very large yard and a cherimoya tree. I want my friends to come and stay at my house for us to have parties, talk about theater and sing. That’s my dream now: sharing with my friends. “Good night”.