Martha Sánchez
in Technologies of Communication and Media
0 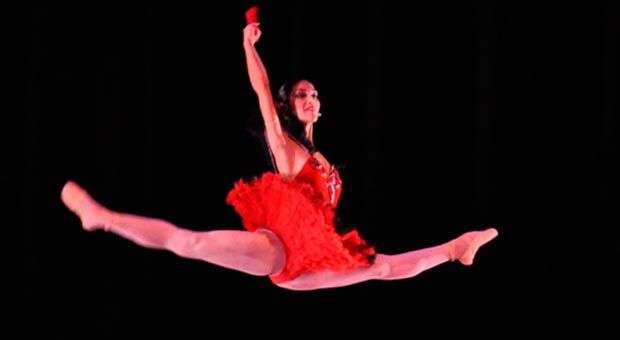 Laurita emigrated as a girl in pursuit of a dream, like many Cubans. But unlike most, her dream just led to cross provincial boundaries. Of course, as every immigrant, she surrendered to a life of sacrifice and oddities. The “infiltrated ” from Ciego de Ávila never lost sight of the dream and today the name Laura Rodríguez arouses admiration in the provinces where she has been able to prove her talent as classical dancer. It would have been probably more noticeable if she integrated the National Ballet of Cuba (BNC), as the media devote more space to this company than any other country, but the Ballet de Camagüey (BC) was fortunate to attract her.

“As I have spent my whole life in the ballet, and you can say I’m more from Camagüey than from Ciego. My mom is a frustrated dancer, loved to dance and she planted the bug in me. Since I was a little girl she played instrumental radio and started dancing until one day I started to dance with her, “the current Camagüey Ballet soloist says.

Ro that central province of the island she came because there was no art school in Ciego de Ávila, so she traveled for testing at the vocational school in Camagüey, where as in Havana there is a powerful development of ballet. There she studied the two educational levels corresponding to the curriculum: 5 years in the vocational and 3 at mid-level, to become professional, and not only of ballet but also travel by road Ciego -Camagüey.

“I really spent many years in a boarding school and traveling between provinces. My family still lives in Ciego de Ávila and I cannot go seeing them every weekend because my job steals my days for functions “, she says with her natural serenity that becomes a trump card in the scene and does not make her seem as off since Laurita leaves a sparkling transmitted both verbally and in the corporeal.

Owner of a shapely figure, with nice thin legs, she mesmerizes at first sight for her physical beauty. Natural extensions and a prodigious axis make her an immeasurable dancer. With her no one can anticipate the number of spins in a variation or a coda, as her conditions is enough to circumvent limits.

Where could she get to? The answer might be common to almost all the dancers of the universe and depends largely on the courage of artists to intelligently manage their condition and bring to maturity, which is not only dancing technique, because it requires a further development in the theatrical. Only time will tell.

As a student, Laura danced the leading roles in Coppelia, Paysant (fragment within the ballet Giselle), and La Fille mal gardée, Tchaikovsky pas de deux and Majísimo, among other choreography. In this highly competitive stage she discovered her ideal dancer: Cuban Lorna Feijoo, former first ballerina of the BNC, current prima ballerina of the Boston Ballet in the United States.

“I was preparing for an international student competition to be held in Havana when the teacher Fernando Alonso visited the school of Camagüey and saw me in a rehearsal of the Paysant pas de deux, in the version of the Scala de Milano. There was no way that the teacher agreed on that work for me and proposed me to find another ballet, we played a random video and the first to appear was Tchaikovsky danced by Lorna. This is a sign, he said, this is the pas de deux that you’re going to do. When I saw that I went laike “wow!”, “this girl of 22 years old exclaims with fanfare that is just beginning to grow and never brag about her.

“I studied the video of Tchaikovsky by Lorna and said wow, no way! To do that I’m missing much. She has always been my ideal. Her arms, her legs, you have to look at her; “she says and lowers her tone of voice to tell that this pas de deux she won the gold medal in the 2008 contest. She doesn’t mention, but it is recorded in official records, that she had won two years earlier the first class medal in the event, that time for children.

As a member of BC, Laura has danced in Ecuador, France and Germany, but when asked about difficult scenarios she shoots a withering response. “Havana, always. There’s an audience that really knows ballet and one gets kind of a tickle when you dance for that audience. Luckily every time I have done the results have been pretty good, “she sighs.

The season of 2013 in Havana had challenging nuances that gave her the opportunity to interpret the pas de deux from Act III of Swan Lake, known worldwide for the epithet of the title character, the black swan. Many ballet fans still remember fondly those functions.

For her each assignment with the Camagüey company has been a joy, La fille mal gardée, the Paquita Grand pas, various pas de deux from the classical repertoire as Arlequinada and the recent start of Don Quixote, with choreography by Cuban Gonzalo Galguera, director of the Magderburgo Ballet in Germany.

The premiere in Cuba of this choreography in December 2013 was in charge of the soloists Laura Rodriguez and Oscar Valdés, who had danced the pas de deux from the third act a week earlier in artistic galas held in the eastern province of Holguin to entertain and share with the great Russian dancer Vladimir Malakhov.

The technical assessment by Galguera did not tarnish the youngsters, despite an order to confront and number of steps very different to the usual one. Public easily perceived distinctions of this new proposal for the popular classic. Rodríguez and Valdés walk with the delivery of collectors because here is not enough to be good in graceful movements, each scene mixes its own complexities and only the concurrence of multiple details constructs virtuosity.

In the middle of a fit to retain the memory of their graphical presentations in Holguin , Laurita shed tears in front of the bus that could not wait to groom on the go with a flash to copy those memories. Videos with such memories were in the hands of journalists who needed to get to Havana that day. The sensitivity of the youngster touched hearts around her. Basically, everyone guessed that the materials would soon migrate for some way to give to the owner. If she imposes the same frenzy to all aspirations, her career certainly walks the prologue, on its way to many provinces.