graham
in Technologies of Communication and Media
2 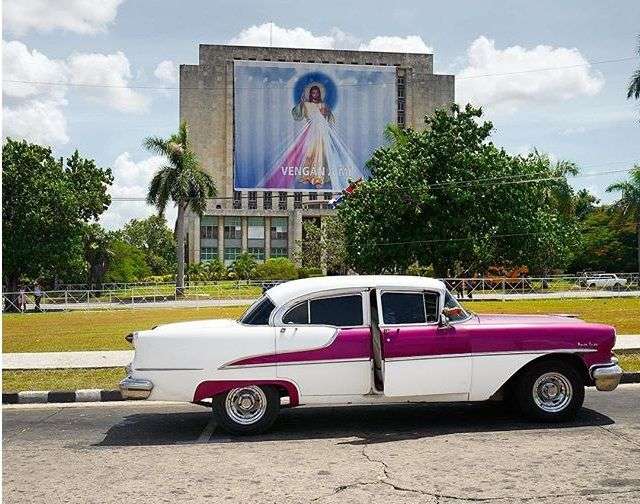 Che Guevara, Camilo Cienfuegos and Jesus Christ. Albeit temporarily, the Christian Savior is the third person to be immortalized on the side of a building (in this case the National Library) in the Plaza de la Revolutión. Standing open-armed above a banner that says “Come to Me” the Messiah is commanding tourists that arrive by the bus load to point their selfie sticks away from the Argentine revolutionary and toward the Nordic looking Son of God.

Not since the standard bearer of Cuban cinema Strawberry and Chocolate juxtaposed, and then destroyed, colorful busts of Jesus and Karl Marx have a communist and a deity been placed so close together in such a public place.

The Plaza de la Revolución, or Revolution Square, is a large sun beaten patch of concrete surrounded by bland examples of civic architecture that house important government agencies. Imagine if the United States Capitol Building, West Wing, J. Edgar Hoover FBI Headquarters, CIA Langley Headquarters, Pentagon, Kennedy Center and Library of Congress were all within a 2 square block radius. That is basically what the Revolution Square is, the nerve center of the political, cultural, and military organizations of Cuba.

And now add Jesus, looking down on all of it, waiting for the hundreds of thousands of faithful and curious alike to see Pope Francisco this weekend.

If you thought that communism and Christianity were incompatible then prepared to be born again 21st Century Cuba.

Even after six years of living in Havana I’m still surprised by how quickly the unexpected can happen. If you asked me last week “When will a giant poster of Jesus Christ be unfurled in Revolution Square?” I would have shrugged and said, “Maybe a decade.” Which is my usual response for when people ask when big changes will happen in Cuba.

But on closer examination I think I still give too much leeway to those old tales that Cuba is a stagnant and unchanging place. Often this message is propagated by those who want to stifle interchange and curiosity. Their message of fear is easy to listen to because it fits our assumptions about what communism is supposed to be. At the same time it completely unburdens us of having to actually learn anything about Cuban culture or society.

Since I have lived here I’ve seen 130 political prisoners have their sentences commuted, the head of state, Raul Castro, announce a self-imposed term limit (he’s done in 2018), the allowance of international travel for Cubans without asking permission for the government first, a couple of opposition candidates participate in municipal delegate elections (they lost), the liberalization of small-scale commerce and the service industry (growing quickly), the buying and selling of houses, cars, and consumer electronics (still really expensive), the inclusion of LBGT persons in a public discourse on gender and sexual equality, and an open invitation to Capitalists and Socialists alike to invest, visit and enjoy the largest island of the Antilles. This is not to mention the myriad of other reforms that go unnoticed, fail, or get tossed by the wayside.

So when politicians and pundits spew on about the United States and Barack Obama giving too much leeway to Cuba, I say our President is barely catching up. Cuba has everything to lose by not being agile enough to know when to make changes. The United States loses relatively little by keeping its unchanging policy from the mid 1960’s, now 10 Presidents old.

Cuba has quietly gone from a state that didn’t allow practicing religious people participate in party politics to a state where a giant image of Jesus Christ now hangs in the holy Revolution Square. Where have we gone? The United States continues to restrict its citizens from traveling and trading freely with the island.

Meanwhile Cuba is on message with Christ: Come to me, as you are.

Now put that gospel music to a salsa rhythm and start passing the collection baskets, it’s going to be another record breaking year for tourism.