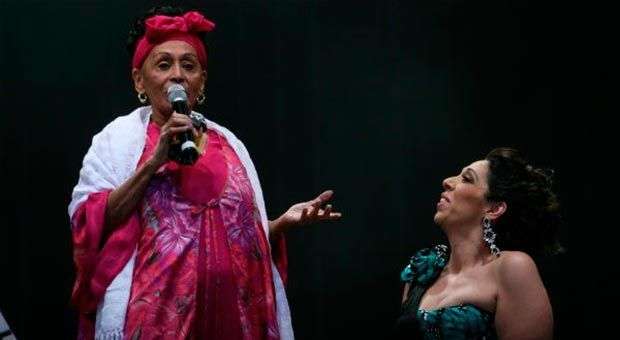 The diva of Buena Vista Social Club Omara Portuondo and Mexican singer Regina Orozco will join their voices once more in a single concert on February 8 at the Metropolitan Theater in Mexico City.Pedazos del corazón is the name they gave to this presentation, in which both performers merge their talents to remember the work of two great Mexican composers: Alvaro Carrillo and Agustin Lara.

Omara announced to the press that the show will be divided into several segments which , accompanied by Orozco , she will perform classics by Lara as Arráncame la vida, Sabrá Dios, Lágrimas de sangre and No pidas imposible , to which they will add hits by Carrillo such as Orgullo, Luz de Luna, and Eso merece un trago.

It is not the first time Orozco and the Omara share the stage since in March last year both performers offered the same recital in connection with the International Women’s Day on stage at the Factory of Arts and Crafts (Faro ) of Oriente, in a free concert , and later sang in the Mexican state of Morelos, and in the Tren Escénico of Cuautla.

It’s a great honor to share the stage again with a woman like Regina Orozco, Omara said, she is a complete and very talented artist, and has an exquisite voice that I love.

Referring once to the Cuban Diva, Orozco, also an actress, said that she learned “to interpret the songs: for example, I listened with her to Solamente una vez, this is a nice song, but I had never heard it so beautifully as she sings it, because each performance is very special, it moves me in the extreme, there are few like her.”

This year Omara Portuondo should release her album Black Magic, which is a remake of the eponymous album with which she debuted as a soloist in 1960, when she was still part of the payroll Las D’Aida quartet with Elena Burke, Moraima Secada and Aida Diestro.